By Lee Ackerman
Omaha, Neb. - In 1975 they decided to have a special event at the Buena Vista Speedway in Alta, Iowa. The event would be in conjunction with the celebration of “Alta Race Days.” The event would be held in late June or early July. The all day affair would include having the cars taken to the Alta City Park on the south side of town where all the fans could check out the race cars. Later there would be a meal for everyone and then a parade of race cars. The cars were escorted out to the Buena Vista County Speedway by the local police.

In 1975 Bill Rice of Des Moines won the event, in 1976 the race was won by Aurora, Nebraska’s Kent Tucker and in 1977 it was Des Moines resident Don Hoffman who went to victory lane. 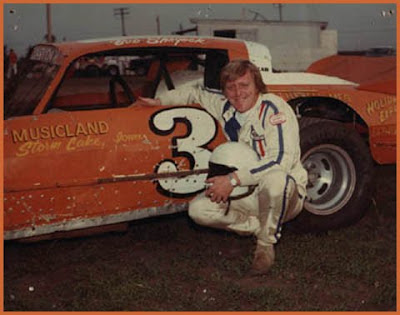 Bob Shryock of Estherville, Iowa was all smiles after winning the 4th Annual "Race Days" in Alta, Iowa on July 9, 1978.

On July 9, 1978, they ran “Race Days” for the fourth time. Estherville, Iowa’s Bob Shryock did not get off to a particularly good start running third in his heat, which earned him the eighth starting position in the feature. But by the seventh lap he was in third. Then on lap 8, Bill Martin of Council Bluffs lost a front bumper coming out of turn four and punctured his oil pan bringing out the red. On the restart, Shryock seized the opportunity and drove by Arnie Braland and Tom Bartholomew and into first place where he stayed for the rest of the event.

Braland of Boone would hold on for second followed by 1975 race winner Bill Rice, Bartholomew and Dan Nesteby. Shryock would be voted the 1978 the Northwest Iowa driver of the year at the conclusion of the 1978 season.

On June 27, 1979 a standing room only crowd and a large field of late models were on hand for “Race Days”. Five heats were run with winners being Bob Kosiski of Omaha, Bob Shryock of Estherville, Bob Hill of Randall, Gary Crawford of Independence and Tom Bartholomew of Waterloo. Shryock won the trophy dash to get the pole for the feature.

Bob Hill got the early lead but on the sixth lap third starting Gary Crawford got by Hill when Hill went high in the turn. Behind Crawford, Clayton Petersen Jr. of Grand Island, Nebraska and veteran Ed Sanger of Waterloo were waging a war of their own. Finally, Sanger made the pass of Petersen and set his sights on Crawford. For the final nine laps of the race, fans were on their feet as Sanger tried to get by Crawford. Crawford would hold on for the win with Sanger finishing second, Bill Martin third, Petersen fourth and Bill Rice fifth.

“Ed didn’t have much choice but to try me on the inside. I was staying in the groove and for him it was either try to get inside of me or follow me around the track,’’ Crawford said after the race. “He was hoping I’d make a mistake and luckily I didn’t.”

The Roadrunner support feature gave fans a glimpse of what was to come in late model racing in future years as Bill Moyer Jr. of Des Moines won the feature with Steve Kosiski of Omaha running second. 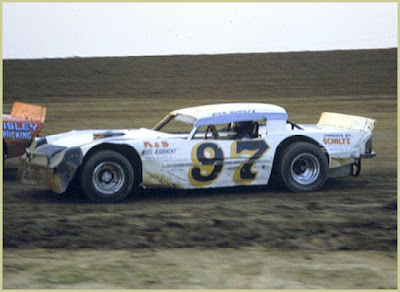 Dick Schiltz of Waterloo, Iowa piloted his late model to victory at "Race Days" in 1980. - Contributed by Lee Ackerman

The sixth annual “Race Days” was a two-day event with action on both Tuesday and Wednesday night. Tuesday night heats went to Bob Harris, Dave Bjorge, Willy Kraft and Bill Martin. Bob Kosiski won the B feature and Dick Schiltz the C. On Wednesday night, Steve Keppler of Marion won the non-qualifiers race with Denny Hovinga taking the inside position race and Bill Martin the outside pole race.

Bill Martin got the jump in the 50 lap feature from his outside starting position and lead with Joe Kosiski on his bumper. Kosiski was able to make the pass on the 8th circuit and took the lead. Leon Plank was the man on the move and he waged war with Hovinga before making the pass on lap 17. On lap 21 Plank took both Martin and Kosiski and assumed the point.

Plank continued to widen his lead but the man on the move now was Dick Schiltz who had started 14th. On lap 22 he was sixth the next lap fifth and on lap 30 took the fourth spot. Schiltz made short work of Martin and Kosiski and on lap 33 went to the lead. Schiltz would lead the rest of the way and take home the win. Plank would finish second but upon going across the scales he was found to be 200 pounds light and he was forced to forfeit second place. Officially, Joe Kosiski would be second followed by Bill Martin, Dave Bjorge and Bob Hill.

“The way things were going early in the race, I really didn’t think we’d be able to close enough to win it,” Schiltz said after the race. “I figured if we could finish 5th we’d be fortunate, but all of a sudden I caught them and then things just seemed to fall into place.”

1981 and the seventh edition of “Race Days” brought a seventh different winner. Heats were won by Jim Thurman of Freeport, Illinois, Billy Moyer of Des Moines, Al Urhammer of Radcliffe and Dave Bjorge of Austin, Minnesota. Bjorge won the dash and Joe Kosiski the consolation.

In the feature it was Bjorge jumping to the early lead and stretching it out over Moyer. On lap 11 Bjorge’s night ended with a broken axle handing the lead of the race to Moyer.


On lap 21 Moyer lost an engine and handed the lead to Dwaine Hansen of Lakefield, Minnesota. Behind him Steve Kosiski, Jim Thurman and Bill Rice waged a battle for second. Around lap 30 Kosiski was able to clear Thurman and Rice and set his sites on Hansen. Kosiski moved in on Hansen and put pressure on until coming off four on the final lap he rode the high side and got by Hansen to win by inches.

“I really didn’t think I was going to be able to catch him,” said Kosiski after the race. “He was running awful fast most of the race, but we really got hooked up the last few laps. I’m fortunate to have some super equipment and these guys really know how to make it work.” Following Kosiski and Hansen to the line were Thurman, Urhammer and Joe Kosiski. 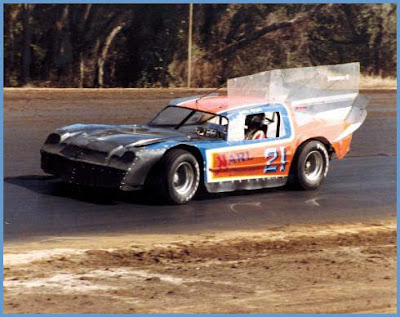 Billy Moyer of Des Moines Iowa motored to a "Race Days" outlaw late model win on June 25, 1982.
On June 25, 1982, they held the eight annual “Race Days” and in true form they had an eighth different winner. This year the race would be Outlaw Late Models and the winner had been to victory lane during “Race Days 79” in the Roadrunner Class. Billy Moyer got around Bob Hill about 10 laps into the 40 lap feature and drove off to win the feature event with Gary Hopp of Harlan coming from the fifth row to run a strong second. Dave Bjorge was third, Dwaine Hansen fourth and Don Hoffman fifth.

Alta Days along with Race Days proved to be a wonderful event combining a great annual celebration with some equally good racing. It brought some of the best drivers in the Midwest to the northwest Iowa area and the grandstands were usually packed.