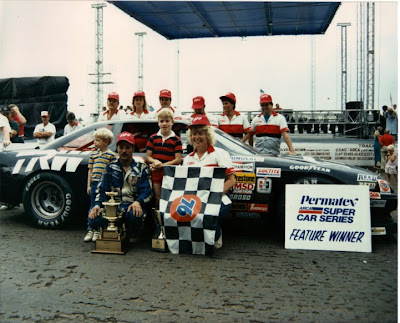 Bob Keselowski poses with family and crew after his ARCA victory at the Springfield Mile on August 21, 1993.

1993 - Bob Keselowksi snapped the longest victory drought of his ARCA Hooters Cup Series career, driving his Winnebago-Galeana's Chrysler to victory in the Coors Allen Crowe Memorial 100 at the Springfield (Ill.) Mile on Sunday afternoon, August 21. Keselowski, winless in the series since July 18, 1992, led only the final three laps on the state fair's one mile clay oval. He posted a two-car length victory over Tim Steele, who was followed by Ken Rowley, Jeep Pflum and Frank Kimmel.

1988 - Steve Kinser, fresh off his sixth Knoxville Nationals victory, led green to checkers in winning the 10th Annual Jackson Nationals in Jackson, Minn., on Saturday, August 20. Kinser kept his Coors Light Gambler ahead of third-starting Dave Blaney during the first half of the 30-lap, $10,000-to-win main event and then beat Sammy Swindell by half a straightaway. Swindell, Bobby Davis, Mark Kinser and Chris Eash.

1982 - Jack Aschenbrenner of Hales Corner, Wis., collected his first feature victory of the season, outrunning Bill Prietzel to the checkers in the 25-lap late model feature at Hales Corner Speedway in Franklin, Wis., on August 21. Aschenbrenner caught race leader Joe Gresk on the back chute on lap 11 and then fought off the challenges of Preitzel the rest of the way.

1976 - Larry Smith of Shakopee, Minn., won his second late model feature in a row at Minnesota National Speedway on Saturday night, August 21, winning the evening's 50-lapper, but it was Mark Lamoreaux of Bloomington, Minn., emerging as the season champion at the Elko track. It was the first championship for the 25-year-old mechanic, who started racing hobby stocks only seven years before.