1994 - Jerald Folk of Iola, Kan., of the famous "Folk Racing Family", out ran the rest of the field to win the Kansas Super Stock Clash at Linn County Speedway in Pleasanton, Kan., on June 11. Folk carted home $800 for his victory at the "Fast Action Track". In other action, veteran pilot Tom Corbin of Carrollton, Mo., showed the young guys the way around the track in the 20-lap winged outlaw sprint car feature.

1988 - Two-time Interstate Racing Association champion Jim Moulis abandoned his usual rim-riding style and used the low groove to score his first feature win of the season in the circuit's 25-lap headliner at Wilmot (Wis.) Speedway on June 11. Dennis Spitz paced the opening 23 circuits before Moulis dove low on him entering turn three. Moulis secured the lead coming out of turn four and never looked back in becoming the seventh different winner in eight events. Spitz settled for second followed by Frank Filskov, point leader Gib Wiser and Joe Roe.
1983 - Hometown favorite Don Weyhrich led the last 12 laps to win the late model feature at Riviera Raceway in Norfolk, Neb., on Saturday evening, June 11. Weyhrich passed early leader Mike Benson of Wakefield, Neb., on lap 13 of the 25-lap main and was never challenged after that. Weyhrich also won the first heat and trophy dash to make it a clean sweep. 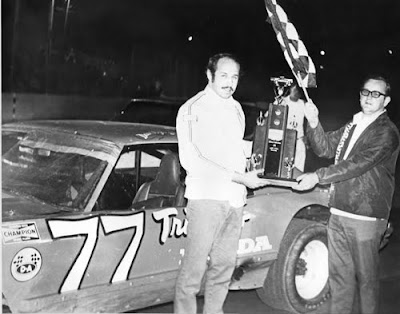 Dave Bjorge of Austin, Minn., chalked up another late model victory at Dodge County Speedway in Kasson, Minn., on June 12, 1977.

1977 - A swift, late surge by Dave Bjorge of Austin, Minn., was enough for him to capture the 30-lap late model feature at Dodge County Speedway in Kasson, Minn., on Sunday, June 12. Bjorge, who started in the sixth row, passed five cars on the 26th lap to jump from sixth to first and go on to victory. Mert Williams and Wendell Kuehn, both of Rochester, Minn., took second and third respectively.