1995 - Seventeen-year-old Ryan Newman topped the 30-lap feature that highlighted the season-opener for the United Midget Auto Racing Association (UMARA) at Grundy County Speedway in Morris, Ill., on June 3. Newman tapped race leader David Thompson on lap 13 sending him to the infield grass. Newman would lead the rest of the way and win handily over Duane Pierson and Don Carter Jr. 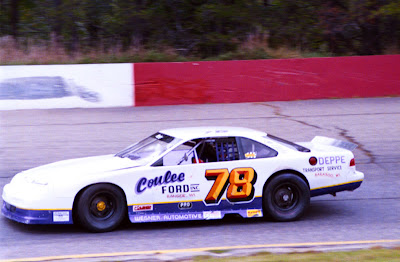 Steve Holzhausen of Bangor, Wis., made history by winning the first Miller 100 raced on the new asphalt of Hawkeye Downs Speedway.
1989 - Steve Holzhausen of Bangor, Wis., made history as he won the ARTGO-sanctioned 17th Annual Miller 100 at Hawkeye Downs Speedway on June 6. It was the first-ever Miller 100 on the new 1/2-mile asphalt track. Holzhausen, driving the only Ford in the field, grabbed the lead from Scott Hansen of Green Bay, Wis., on lap 47 and then held off fast qualifier Butch Miller of Coopersville, Mich., for the victory.
1978 - Tony Izzo of Bridgeview, Ill., captured the "Nifty 50" late model feature at Santa Fe Speedway in Hinsdale, Ill., on June 4. Izzo passed race leader Ken Widdes of Chicago early in the contest and finished far ahead of Pete Parker of Kaukauna, Wis. and John Provenzano of Glen Ellyn, Ill. Bill Knippenberg of Hinsdale won the 30-lap sportsman feature.

1967 - Don White of Keokuk, Iowa, driving a Dodge Charger, won two heat races and the 30-lap feature before 13,857 race fans at Soldier Field in Chicago on June 3. White, racing third for the first 20 laps, took advantage when Sal Tovella sent race leader Jack Bowsher into the south wall and White slipped by both of them. Tovella hung on to take second while Norm Nelson, Bill Shoulders and Bay Darnell rounded out the top five. Promoter N. Perry Luster announced that because of the higher than expected attendance, the original purse of $5,000 would be upped to $6,700. White earned $800 plus a bonus of $350 bonus with the pay raise.