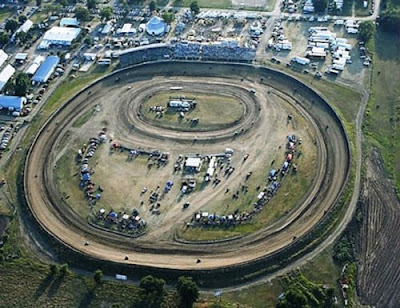 
Belleville, Kan. - To drivers it is one of the scariest places in the world to race. “Man is this place fast,” said national known Iowa dirt late model driver Brian Birkhofer, after winning a Hav-A-Tampa race at Belleville in 2004. “The track is definitely flat out wide open all the way around.”

They have been racing at this historical venue continuously for 100 years. The first documented race at Belleville was on July 4, 1910 when somewhere between 7,000 and 10,000 fans watched three cars raced around the half mile for ten laps with a winning time of 7 minutes and 10 seconds or 43 seconds per lap. On July 30, 2009 Terry McCarl turned the track in 14.32 seconds in a 410 Sprint car. Of course he had a little more banking and a lot more horsepower to work with.

It started as a flat ½ mile track but in the in 1932 it was changed to a high banked oval that in the 50’s saw 18 feet banking. While the banking has been lowered somewhat from those summit type banks it is still one frightening place to race. They don’t call it the World’s Fastest ½ mile dirt track for nothing.

The track itself is almost a circle and you don’t get the same perspective you do on most dirt tracks with their very distinctive corners. At Belleville it’s virtually flat out all the way around the track and its truly demanding on both driver and equipment. It’s seen sprint cars, late models, motorcycles and most everything in between and since 1978 it’s been home to the Belleville Midget Nationals.

In 1911, they raced again at Belleville with W. W. Brown of Kansas City, Missouri being declared the winner. While its not know whether automobiles raced at Belleville in 1912, it is documented that they did return in 1913 with Belleville’s Harry White, the 1910 winner taking home top prize in the “Home Race” while Iona, Kansas Glen Breed won the Professional “Free For All Event.” A feat Breed would repeat in 1916.

In 1927 thru 1929 it was “Little Pat” Cunningham of St. Joseph, Missouri who dominated Belleville winning two features in each year and in 1928 setting a track record with a lap around Belleville of 28 seconds flat.

In the earlier 30’s winners at Belleville included the legendary John Gerber of Stanwood, Iowa and a two day sweep in September, 1931 by Iola, Kansas’ Lew Irwin.

In the late 40’s and early 50’s the roadster ran a number of times on the high banks with most of the races being dominated by Andy Anderson in “the Belle of Belleville” owned by Belleville resident Ray Goodrich.

The International Motor Contest (IMCA) would race for the first time at Belleville in 1951 with Frank Luptow winning in the Big Cars and Bob McKim in the Stock Cars.


IMCA would race at Belleville continuously through 1960 and then on and off again schedule with the final racing being a 1968 stock car race won by Ramo Stott. Ironically it was just 50 years ago this July 4th that 12-time IMCA stock car champion Ernie Derr won a 50 lap feature at Belleville. Perhaps the car that had the most success over the years at Belleville was Hector Honore’s Black Deuce. First with Bobby Grim driving and later with "Pistol" Pete Folse behind the wheel the car won 13 IMCA Big Cars Races at the High Banks, including the last 8 in a row. 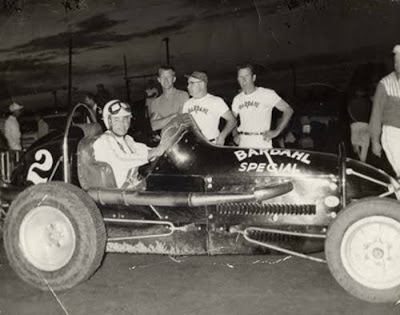 
The era of the Big Car Racing Association (BCRA) started at the high banks in 1965 and ran through 1976. Many of the best sprint car drivers in America would visit the famed high banks for either the Memorial Day event or the Fair races which both were held annually. Roy Bryant would drive the Red Forshee #84 to several feature wins at Belleville and win BCRA championships in 1968 & 69.

Lonnie Jensen behind the wheel of a number of different cars would win 6 BCRA features and would also claim the BCRA title in 70 & 72. The Pius Selenke #43, Williams-Swenson #24, Bill Smith 4x and Larry Swanson #14 were also multiple winning cars at Belleville in BCRA competition.

One of the benchmark events in Belleville racing history came during a BCRA on August 23, 1968 when Lloyd Beckman behind the wheel of the Larry Swanson Chevy broke the magic 20 second barrier when he toured the high banks with a lap of 19.94 seconds.

For more than two decades the O’Reilly National Championship Racing Association has been a staple at the High Banks. NCRA Outlaw Sprints, 360 Sprints, Late Models and Modifieds have all challenged the banks. Two stories of note about the NCRA, one was this writers experience at a NCRA 360 show. The feature went green, white, checker, and I recall saying out loud, “It’s over all ready.” It doesn’t take long to get around the high banks. 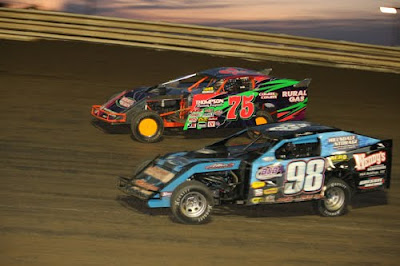 
The other comes from Warren Hardy of the NCRA as he recalled the time Al Purkey came in second to Kelly Boen during an NCRA Late Model Show at Belleville a few years ago. After the checkers waved, Purkey got out of his car for the interview and asked “Did I win.” As Warren relates, “Al hadn’t seen the race winner (Boen) because Boen had lapped every car in the field except Purkey and he was only a couple of car lengths behind him at the line. All, in just 25 laps.”

This year to celebrate its 100 year history they are holding a very special race, the Belleville 100. Actually its 40 laps one day and 60 laps the next and the race will be for modifieds. The modifieds have run Belleville many times but certainly nothing as demanding as this race.

Then comes the thrilling conclusion. 30 cars will race for 60 laps, with the winner getting $10,000 to win and the race paying $1,000 just to start. But there’s a catch. If the pole sitter for this race decides to start 30th and last and wins the race, that driver will receive a cool $100,000 for winning from the back of the pack. Veteran Lincoln, Nebraska flagman Larry White will be in the flag stand. 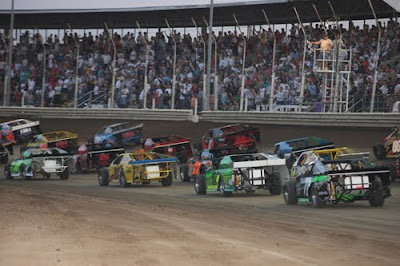 
The Belleville High Banks are located at the North Central Kansas Fairgrounds on the north side of Belleville, Kansas. For more information, go to http://www.belleville100.com/. While in Belleville you can also visit the High Banks Hall of Fame and National Midget Auto Racing Museum located just off highway 81.