1948; The mighty midgets at Indianola 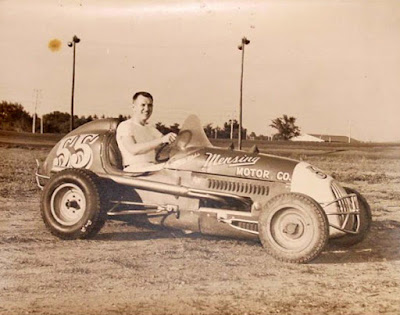 
by Lee Ackerman
Omaha, Neb. - In the late 1940’s midget auto racing was king and in Iowa and the surrounding states that meant the Midwest Midget Auto Racing Association. The race manager for the MMARA was the legendary John Gerber. Gerber and his wife Rose started promoting races after World War II.

They ran both stock cars and midgets, running as many as eight races a week. They even bought the Mississippi Valley Fairgrounds in Davenport and used it as a flagship for their races before selling it back to the county. The MMARA ran from 1946 thru 1955. One of the venues that ran with MMARA was the Warren County Fairgrounds in Indianola, Iowa. Below are the highlights of several of the races run in Indianola in 1948.

On June 3, about 20 midgets showed up run the first MMARA race of the year at the Warren County Fairgrounds. Cedar Rapids chauffeur Dick Ritchie driving the Mensing Brothers #56 out of Lowden, Iowa would set quick time at 17.38 seconds followed closely by defending series champion Danny Kladis of Chicago, Illinois in the Eric Lund #39. Ray Hall would win the first heat driving the Paul Kaminsky #4 based out of Erie, Illinois. Johnny Hobel at the helm of the Max Morgan #5 would win the second heat with Dick Hobel taking the third heat in the Cheney #25.Red Hoyle wheeled Art Jacobsen’s Omaha based #33 to the win in the handicap event with Silvis, Illinois’ Joe Gustaf taking the semi-feature in the Smith Car and Trailers #60.Ray Hall would set on the pole for the twenty lap feature and he would not be denied as he took the checkered flag ahead of Red Hoyle and Dick Hobel.

The midgets returned to Indianola on June 24 with Red Hoyle taking his Art Jacobsen prepared #33 to fast time with a lap of 17.72. Hoyle then stormed from his sixth starting position to win the first heat. Walt Raines of Alta, Iowa would win the second heat in his #29 with Lloyd Thurston in the Fitch #45 taking the third heat. Hoyle continued on his hot streak by taking the handicap event and Dick Ritchie picked up the semi-feature. Red Hoyle put an exclamation mark on the evening by making it a clean sweep as he won the 20 lap feature besting Walt Raines and Dick Hobel in the Oskaloosa based Paul Van See #63.

When the mighty midgets returned to the Warren County Fairgrounds on Monday, July 5, defending series champion Danny Kladis, who’s two previous visits to Indianola had left something to be desired, decided it was time to put things in order. He started out by running a qualifying lap of 17.15 which tied Red Hoyle for quick time. Kladis then proceeded to win the first heat, with Ray Hall taking the second heat in the Kaminsky #4 and Art Wheeler in the Davenport based Dick Elliott #1 winning the third heat. Clyde Young behind the wheel of the Van Zee #63 won the handicap event with Bud Koehler taking the semi in George Smith #77 out of Blue Island, Illinois. Kladis then nailed down the 20 lap feature as he held off Red Hoyle and Clyde Young.

A small field returned on Wednesday, July 14 to do battle. Alta, Iowa’s Walt Raines set quick time at 17.20 seconds. Raines followed that up by winning the first heat, with the other two heats won by Dick Ritchie in his familiar #56 and Glen Cromwell in the R. E. Doty #100 based out of Davenport. Raines won the handicap, Ritchie the semi and then Raines won the 20-lap feature over John Spach in the #7 out of Hollywood, Illinois with Ritchie third. 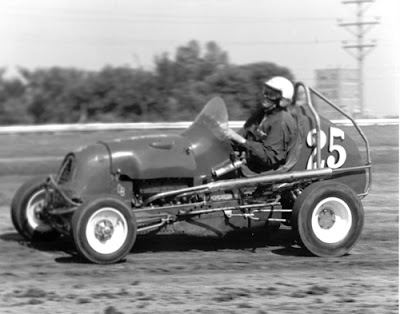 Dick Hobel in the Cheney #25


On July 28, Danny Kladis returned to the Warren County Fairgrounds and put a whipping on them. Kladis set fast time of 17.08 won the first heat, the handicap and the feature. Art Wheeler in #1 and Vic Ellis in the Morris Springer #42 of Davenport won the other heats with Cedar Rapids’ George Miller in his own #77 winning the semi. Art Wheeler would finish second in the feature to Kladis with Dick Ritchie third.

On August 11, it was more Danny Kladis as he once again set quick time at 17.33 won the first heat, and the feature. His only blemish of the evening was a second to Ray Hall in the Kaminsky #11 in the handicap race. Other heats went to Hall and Walt Raines with the semi going to Paul Newkirk in the Max Morgan #5. Following Kladis to the line in the feature were Raines and Tony Russo of Racine, Wisconsin.

The final visit of the season for the MMARA came on Wednesday, September 8. Danny Kladis kicked off the evening by setting fast time once again, this time with a lap of 17.10. Kladis was unsuccessful in winning his heat however, as Art Wheeler won the event with Harold Raines second and Kladis third. Tiny Wainwright in the Lloyd Van Winkle #3 of Lincoln, Nebraska won the second heat with Paul Newkirk in the Morgan #5 taking the third heat. Red Hoyle held off Kladis to take the handicap event. A driver named Skinner won the semi in car #5.

In the final feature of the year at Indianola it was Red Hoyle in the Jacobsen #33 winning the feature followed by Ray Hall in the Kaminsky #11 and Tiny Wainwright in the Van Winkle #3.

The mighty midgets were perhaps the most popular class of racing from the 30’s through the early 50’s.

For many years it has appeared that midget racing has lost much of its following, but with 300 some entries at the 2009 Chili Bowl, the future of midget auto racing seems to be on the upswing again.