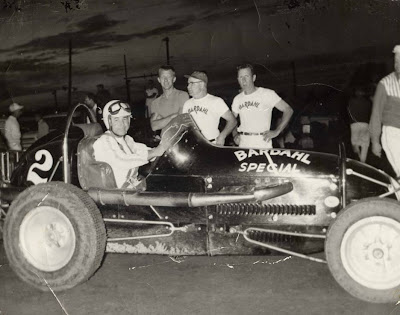 by Lee Ackerman
Omaha, Neb. — As a kid growing up on a farm in Central Nebraska, one of my first exposures to racing was at the Nebraska State Fair. My dad and I (and probably a cousin or two) would head out very early in the morning. (State fairs were huge in those days). We had a routine and that included getting to the ticket window in plenty of time to ensure that we got tickets for the grandstand show, The IMCA Big Cars.

If there is anything that is forever etched in my mind about my early visits to the Nebraska State Fair, it’s the image of Hector Honore’s legendary Black Deuce throwing rooster tails onto the white fence as it went through the turns. First with Bobby Grim behind the wheel, and later with “Pistol” Pete Folse at the control, that Black No. 2 Offenhauser did more than any other single thing to make me fall in love with auto racing. I don’t think I’m alone.

I knew little back then about the unassuming car owner/mechanic of the Bardahl Special; I just knew it was a thing of beauty. Hector Honore was born in 1905 in Pittsburg, Kan. After the death of his father, his mother remarried and they moved to Illinois, eventually settling in Pana.

After the depression, Honore started an auto repair business in Pana, Illinois, known as the “City of Roses.” After a brief stint driving his own cars, he turned the driving over to others. First it was Harold Shaw and in 1942 they won the championship in the Midwest Dirt Track Racing Association (MDTRA). After the war with Cliff Griffith behind the wheel, they won the MDTRA championship in both 1946 and 1947. With Griffith’s departure following the 1947 season, Honore found a new driver in Coal City, Ind., driver Bobby Grim.

It didn’t take the new combination long to find the winner’s circle. From 1948 thru 1950 the pair campaigned in both the Central States Racing Association and the International Motor Contest Association. They finished in the top seven all three years in the CSRA with third place finishes in 48 and 50. In 1948, they finished 10th in the IMCA season championship running against legends such as Emory Collins, Deb Snyder and Frank Luptow. On May 9, 1949 they won their first IMCA race at Danville, Ill., and another later that year at Columbus, Ga. In 1949 they scored seven wins in IMCA and a sixth in points. In 1950 splitting time between the two sanctioning bodies they scored only one win in IMCA.

In 1951 they picked up the Bardahl sponsorship and decided to concentrate on Al Sweeney promoted IMCA races. The result was several wins and a fifth in points. In 1952 it was nine wins and a fourth in points. In 1953 they edged even closer to a championship winning 15 IMCA features and finishing third. In 1954 they crept a little closer, winning 17 features and losing the championship to the great Bob Slater. Things may have turned out quite differently that year, if Grim had not had a frightening crash at the Belleville High Banks. While racing side by side with Slater the two made contact sending Grim and the deuce into the outside wall. The car ended upside down on the track with Grim pinned beneath. He suffered third degree burns from being pinned against the tailpipe as well as a dislocated shoulder. He would miss six races. But they had done their homework, they were ready.

To replace Grim, Honore turned to veteran IMCA campaigner Pete Folse of Tampa, Fla. The Black Deuce didn’t miss a beat. Folse finished the 1958 season by winning the final two races of the IMCA season at Shreveport, La. In 1959, it was another run-away championship with the Honore-Folse team winning 22 features. The 1960 IMCA points race was probably over before it had hardly started with Folse winning six of the first seven races and ending the season with 31 wins. In 1961 with fewer races on the schedule the pair won 19 times and the seventh and last IMCA championship for the black deuce. The competition would get tougher.

In 1962 and 1963 the pair would finish second in points, first to Johnny White and then to Gordon Wooley. Then came the reluctant switch to Chevy power. The Black Deuce would still be a force in IMCA, but would finish third for three straight years with a different driver each year, first Jerry Daniels, then Gordon Wooley and finally Bill Puterbaugh. 1967 would be the last year Honore would campaign the legendary car. He would have an assortment of drivers including Don Daniels, Jim Moughan. At the end of the year the car was sold to Chuck Weyant of Springfield, Ill., and was campaigned through the mid-seventies.

Hector and his wife, Olga “Ma” Honore, claimed they had traveled over 1,100,000 miles over the years campaigning on the big car circuit. Honore’s “City of Roses” No. 2 cars are credited with 434 wins, 704 heat race wins and 216 new track records over his 32-year racing career. Hector Honore passed away on March 3, 1983.

The beautiful, never to be forgotten sounds of the Offenhauser engine have long since disappeared from the American Racing Scene. The thrill of going to the State Fair with crowds of over 100,000 and quickly sold-out grandstand crowds of 15 to 20 thousand have disappeared as well. They have all became just a part of the history. But to those of us who grew up in that era, the sights and sounds of the State Fair, the Big Car races and that beautiful perfectly prepared Black Deuce throwing its rooster tail of dirt onto the white fences and the man who created it will never be forgotten.

Special thanks to Tom Schmeh and the National Sprint Car Hall of Fame for letting me use their materials.