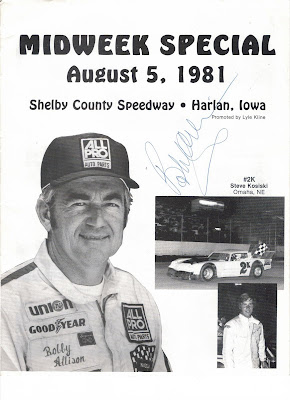 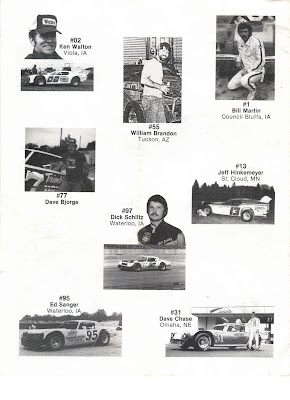 Harlan, Iowa - In the last few years, Kenny Schrader and more recently other NASCAR stars have made a practice at visiting short tracks around the country and racing with the local drivers. Back in his heyday, Bobby Allison did the same thing. On August 5, 1981, Lyle Kline promoted a midweek special in Harlan, Iowa with Bobby Allison as the main attraction.

The results were overwhelming. An overflow crowd estimated at 5,000 many in the infield, showed up to watch Allison battle the best in the Midwest. The competition included; Joe and Steve Kosiski, Don Hoffman, Bill Rice, Tom Hearst, Darrell Dake, Bill Davis, Kenny Walton, Bill Martin, Johnny Johnson, Dave Chase, Leon Plank, Dave Bjorge and all the way from Arizona, Carl Trimmer. Also in the field was an upstart from Des Moines named Billy Moyer.

Allison sandwiched his visit to Harlan between a 200-mile tire test for Goodyear earlier in the day at Charlotte and his normal NASCAR schedule. Allison did the tire test, boarded his twin-engine Aerostar, flew to Montgomery, Alabama to pick up an old friend, Richard Abercrombie and then headed for Harlan. The 1977 silver and black #12 Camaro that Allison drove at Harlan was brought to Harlan by Bobby Brown of Aberdeen, Mississippi. Allison’s plan touched down at 7:10 pm in Harlan giving him time to only get a couple of hot laps in and he was ready to take on the Iowa gumbo.

Allison started the night out by running seventh in the third heat, a 12-car affair won by Dave Chase of Omaha. The other five cars that finished ahead of Allison were in order, Steve Kosiski, Don Hoffman, Billy Moyer, Darrell Dake and Joe Kosiski. That is what you call a pretty tough heat race.

Allison would start 25th and last in the 50-lap feature with $1,200 going to the winner of the event. While he managed to move up 14 positions during the race, this still left Allison in 11th place when the checkered flag dropped. Steve Kosiski of Omaha would take the lead from Bill Rice of Des Moines with 23 laps to go and go on to take the $1,200 first place money. Following Kosiski to the line were Rice, Tom Hearst of Wilton, Iowa, who would become the first NASCAR Weekly Racing Series National Champion in 1982, Leon Plank of Eau Claire, Wisconsin and Dave Bjorge of Sargeant, Minnesota.

The next day, Allison headed to Mid-Continent Raceway near Doniphan, Nebraska to compete in the Nebraska Late Model Nationals. He would compete in preliminary night action before heading back east for a NASCAR event. Again, he was a big hit and received a great deal of media and fan attention. In Thursday night's qualifying Allison was over a second off the time of fast qualifier Larry Phillips who turned a lap at 21.29. Allison’s best lap was 22.42. Later Allsion would compete in the 2nd qualifying heat race and finish fourth in that 20-lap event, won by Don Hauserman of Wichita, Kansas.

A member of the famous Alabama Gang that included Bobby’s brother Donnie, Neil Bonnett and the legendary short track driver Red Farmer, Bobby Allison would continue to race in the NASCAR Winston Cup Series until a near fatal accident at Pocono in 1988 ended his career.
During his Winston Cup Career, Allison won 57 poles, 84 races (tied with Darrell Waltrip for third all-time), three Daytona 500s, and in 1983 realized his dream by winning the Winston Cup National Championship. Allison was also a five-time runner-up in Winston Cup. He was also a two-time National Special Modified Champion (1962 and 1963) and the National Modified Champion (1964 and 1965).