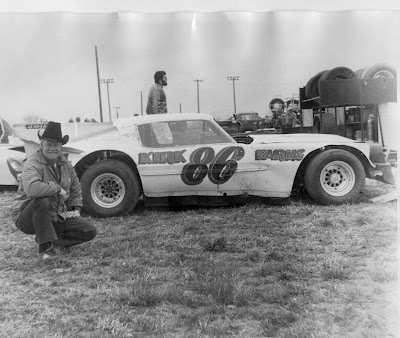 
Bill Kirk started his career in 1959 when his wife and his parents talked him into going to a local track in Onawa, Iowa. It was there that he caught the racing bug and after a few short weeks, he purchased a race car.


Even before his race career even unfolded, it was said that Bill was quite the terror on the two-lane black tops and gravel roads around his home in Sloan, Iowa. Beginning at a young age, he was fascinated with speed.


A local racer, William (Bill) Bradstreet, took the young lead foot under his wing and taught him a few tricks of the trade. As Kirk would say later, "I would follow him (Bradstreet) through the pack, trying to stay clean so I could finish. I couldn't believe some of the moves he would make on the track, psyching out the other drivers."


Eventually it was Bill Kirk who was leading the pack and psyching out the other drivers. Kirk would go on to be the most dominant drivers in the Siouxland region. He won championships at several different tracks throughout the region including:


Kirk was the only Siouxland triple crown winner in 1973 when he scored championships at Collins Field, Interstate Speedway and Raceway Park.


He was one of the few from the area who made the annual trek down to Florida for Speedweeks. He loved heading south every winter not only to compete with the very best but to proudly represent the Siouxland racing scene.


Bill was also considered a pioneer of sorts leading the industry through it's steps, from the coupes of the 50's, to the super modifieds of the late 60's and finally to the late models of the 70's.


Throughout his racing career, Kirk felt a responsibility to promote the sport he loved so much. Even after a long, hard night of racing there he was, a smile on his face, greeting race fans, young and old alike.
He was known as the "pro" of professionals. The "Salix Speedster" Bill Kirk passed away in 1988.