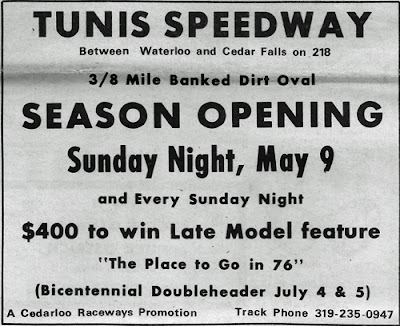 Cedar Rapids, Iowa – Let's take a look back, 30 years ago to be exact, and see who the winners were this week in Midwest racing circles. It was season openers for many tracks.


Curt Hansen of Dike, Iowa, would hold off a bevy of “hot iron” to win the 20-lap super stock feature on opening night at Southern Iowa Speedway in Oskaloosa, Iowa, on Wednesday, April 28. Hansen held off Mel Morris of West Liberty in the closing laps to collect the $500 top prize. A see-saw battle for third saw Roger Dolan of Lisbon overtake Bill Rice of Des Moines. Dave Allison of Des Moines was the sportsman main event winner.


Dick Trickle of Wisconsin Rapids, Wis., brought the State Park Speedway crowd to its feet Thursday, April 29 when he became the unexpected winner of the season opener in Wausau, Wis. In a finish reminiscent of the Daytona 500, race leaders Mike Miller of Wisconsin Rapids and Tom Reffner of Rudolph appeared to be headed for a photo finish when the two suddenly skidded in turn four, allowing Trickle to sneak by for the lead and take the checkers. 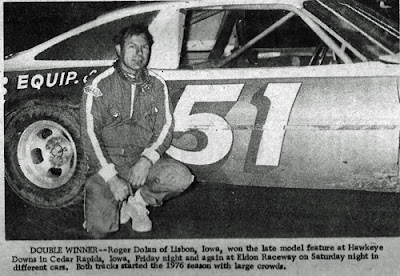 At the season opener at Hawkeye Downs Speedway Roger Dolan and fast qualifier Bill Zwanziger of Waterloo would swap the lead on three different occasions before Dolan was able to secure the top spot and win the late model feature on Friday, April 30. Zwanziger would settle for second, followed by Darrell Dake of Cedar Rapids, Curt Hansen and Don White of Keokuk.


Johnny Ziegler of Madison, Wis., drove to victory in the 30-lap feature at Capital Super Speedway on Friday night Ziegler took the lead on lap 25 after starting tenth. A four-way battle developed for second place with Dave Watson getting the advantage over Joe Shear, Dick Trickle and Jim Sauter.


Terry Bivins of Shawnee, Kan., fought Joe Wallace of Peyton, Colo., for all 25 laps before winning the late model main event at Lakeside Speedway in Kansas City, Mo., on April 30. Dave Rupard of Grandview, Mo., came from last place to capture the modified sprint car feature over Gene Gennetten of Gladstone, Mo. Despite bad weather, a surprisingly large crowd of 4,000 race fans were in attendance.


Roger Dolan would sweep the program at Eldon Raceway on Saturday, May 1, by winning the trophy dash, heat and 20-lap feature. Dolan was chased across the finish line by Pokey West of West Chester and Steve Fraise of Montrose. 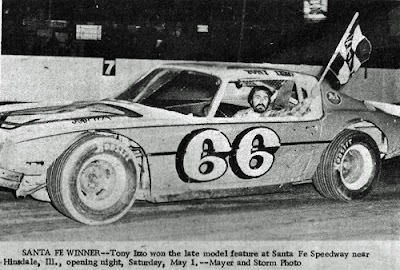 Tony Izzo methodically worked his way from the back of the field to win the 30-lap late model feature at Santa Fe Speedway in Hinsdale, Ill., on Saturday night. The Bridgeview, Ill., hot shoe shot his 1976 Camaro into the lead on lap 12 and warded off a brief challenge from Jim O’Conner and defending track champion Larry Jackson before finding himself in the winner’s circle.


George Barton of Ankeny would capture the late model feature at the Iowa State Fairgrounds in Des Moines on Saturday evening. The Boone, Iowa, race promoter also won the first heat before winning the 20-lap feature. Dave Farren of Des Moines drove his 1967 Camaro to an impressive victory in the sportsman feature. An estimated 8,000 spectators watched the season opener. 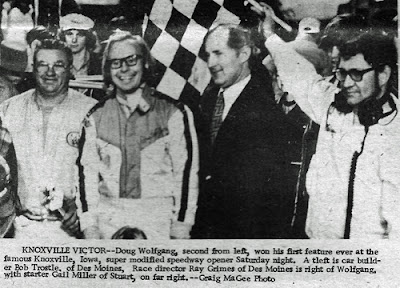 Doug Wolfgang of Lincoln, Neb., was fast qualifier, finished second in the trophy dash, won the fourth heat and then capped a great night by winning the 25-lap super sprint car feature at the Marion County Fairgrounds in Knoxville, Iowa, on Saturday night. Piloting Dave Van Patten’s Chevrolet-powered sprinter, it was Wolfgang’s first feature win ever on the historic half-mile.


Jan Opperman, the ordained minister from Noxon, Montana, took the lead at the green flag and led all the way in winning the 6th annual Tony Hulman Classic in Terre Haute, Ind., on Saturday afternoon, May 1. Pancho Carter, the 1974 USAC sprint car champion, spent much of the afternoon chasing Opperman but settled for runner-up honors. Bubby Jones, Dana Carter and Bruce Walkup rounded out the top five finishers. With a record $43,000 purse, the race was seen nationally on ABC’s Wide World of Sports.


“Big” John Moss of Iowa City captured the late model feature at the West Liberty Fairgrounds on Saturday night before another large crowd on damp night. Moss overtook Jack Hall of Muscatine on a lap 11 restart and then held off a hard-charging Ron Weedon of Pleasant Valley to secure the win. Ron Pallister of Wapello exchanged the lead with Bob Kleindolph of Muscatine before winning an exciting sportsman main event. 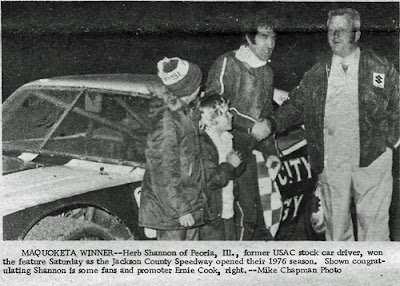 Herb Shannon of Peoria, Ill., made the haul to the Jackson County Raceway in Maquoketa, Iowa, worthwhile by winning the 50-lap “Early Bird Special” on Saturday night. Shannon would endure a grueling battle with Jim Burbridge of Delhi, Iowa for most of the race. Burbridge would lead the affair for the first 34 laps before relinquishing the top spot to Shannon who would hold on for the $550 top prize.


Bill Martin of Council Bluffs play second fiddle to Bob Kosiski of Omaha in the heat and trophy dash but turned the tables and won the A-main at Sunset Speedway in Omaha, Neb., on Sunday, May 2. Second place finisher Kosiski finished ahead of Council Bluffs drivers Dave Chase and Ron Tilley. It was the season opener for the track and offered double points.


Glenn Woodward of Des Moines would edge his brother, Leonard to capture his third consecutive late model feature at Stuart Speedway on Sunday evening. Glenn, who qualified for the feature through the consolation, had his work cut out for him having started 12th in the main event. Running the low side, he picked car after car off and then passed his brother with only a couple of laps left to score the victory.