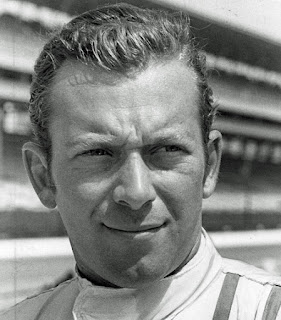 Gary Bettenhausen
New Bremen, Ohio (April 18, 1976) – Indiana’s Gary Bettenhausen passed Tom Bigelow of Wisconsin on the 38th lap of the 40-lap race to take the victory in yesterday’s United States Auto Club (USAC) Sprint Car feature at New Bremen Speedway
The early laps of the 40-lap feature saw Johnnie Parsons, also of , in the lead from the green flag. Charging from his second row starting position ’s Larry Dickson brought his “Polak Sprinter” up to challenge Parsons by lap nine, but could not manage to get by the evasive Parsons.
By lap 12 Bigelow began to make his move, getting by both Dickson and then Parsons to take over the lead on lap 28. Close on Bigelow’s tail, Bettenhausen in the Willie Davis “Spirit of Syracuse” sprinter, quickly got by Dickson and Parsons in one sweep and went to work on Bigelow, finally getting by him on lap 38 for the win
Bigelow, in the “Elder Cadillac” sprint, finished second, with Dickson, who got around Parsons on lap 30, hanging onto third spot.
The race was run in 11 minutes, 59.70 seconds, bettering the old mark of 14:43.35 for a 40-lap feature by 2 and a half minutes, to set a new record on New Bremen’s half mile pavement.
Bettenhausen’s win was his 34th USAC sprint car feature victory of his career, making him second only to Dickson (with 41) in USAC sprint feature checkered.