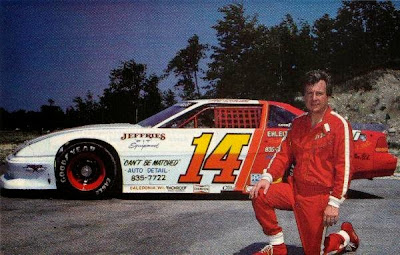 
Taking over the lead from Steve Holzhausen on the 59th circuit, Schill went on to win with a commanding margin over Holzhausen. Trailing on the high banked quarter-mile paved oval were John Ziegler, Larry Schuler, Rich Bickle Jr. and the afternoon’s fastest qualifier, Joe Shear.


“That yellow flag helped,” said Schill after the when. “The tires cooled, and I was ready to go for it (the lead),” he added. “He (Holzhausen) was having a little handling trouble coming off the corner, and I just got alongside him enough to take the lead,” Schill said.


Holzhausen led from the start with Schuler giving chase. Schill, with Ziegler in pursuit, got by Schuler for second and moved in on Holzhausen first shot at the lead.


Steve Seligman captured the 20 lap semi-feature advanced to the Main event. The semi-feature was red flagged when 1984 rookie of the year, Scott Hansen, and Doug Herbst crashed into the wall the first lap. Hansen's Pontiac Firebird did a slow rollover. Hansen escaped injury in his crew was able to repair the car for the feature.