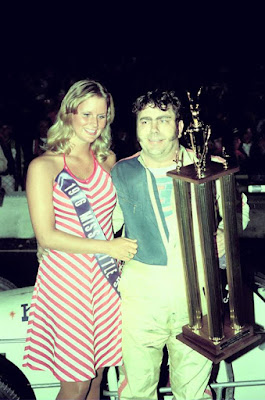 
The Floyds Knob, , resident crossed the finish line two hours, seven minutes, 14.49 seconds after starting from the pole position to earn his second win in this premier sprint car event.


"It got awful rough during the last part of the race," said Gaines who previously won in 1973. "Something went wrong during the last 100 laps or so. The car felt like it was going to shake me to pieces. I knew where I stood, though, and I wasn't about to let up any."


Gaines finished the grind over four laps ahead of 's Mike Johnson. But all was not as easy as it appeared.


Gaines jumped into the lead from the start with ' Butch Wilkerson in close pursuit from his outside front row position. By the 50-lap mark, Wilkerson had overtaken Gaines with Ed Angle running a close third.


The first major incident of the evening occurred on the 62nd lap when Ron Dorsett spun his Dennie Weatherford Chevy into the path of Danny Smith's ride. Both cars ended up against the retaining wall along the first turn and were done for the evening.


Angle had taken the lead by the 75-lap mark, but was unable to gain any substantial advantage over Wilkerson or Gaines. Gaines overtook Wilkerson, setting the stage for some close racing between himself and Angle until he took the lead on lap 170. Gaines was never headed again, building a gradual lead over the remainder of the competition.


Three-time winner Darl Harrison, although never applying any real pressure on the front-runners, remained in the top 10 until his engine ceased on the 300th lap. Angle was having some handling problems but held on to finish third behind Johnson.


Wilkerson eliminated himself on lap 409 when he lost control of his car near the end of the backstretch and smacked the wall, taking Bobby Adkins and Danny Milburn with him. Adkins was forced out of the running due to the mishap, but Milburn was able to continue.


Perhaps the biggest thrill during the evening (and nearly the most costly for Gaines) occurred on the 497th lap when Chuck Mosley, driving his own Chevy-powered machine, lost it coming onto the main stretch directly in the path of the oncoming Gaines. The eventual winner found room, however, to guide his Kinser Brothers Chevy between the broad sliding Mosley machine and the outside wall with less than a foot to spare. Gaines then coasted under the checkered flag, and then announced he would be back next year to try for number three.