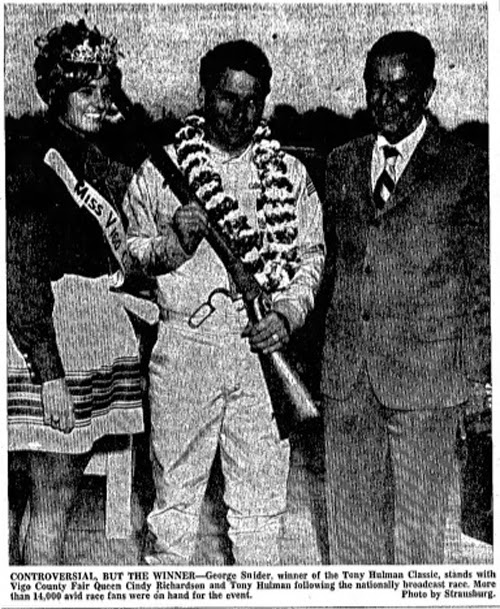 (May 1, 1971) - George Snider walked away with top honors as he captured the feature event of the Tony Hulman Classic on Saturday afternoon at the Terre Haute Action Track.


An estimated 14,000 race fans were on hand to view the race which was also covered live by 's Wide World of Sports and broadcast nationwide.


The race also I had another first in the fact that it was the richest purse ever paid for a USAC sprint car race. The purse totaled $28,538 in cash, plus extra merchandise. The official results of the feature were not obvious at the finish as Don Nordhorn, who finished second, protested for what he thought was a violation of USAC racing.


Nordhorn’s protest originated between the first and second turn when Johnny Parsons Jr. lost a tire with only three laps remaining in the 40-lap feature event.


The accident forced the waving of the yellow flag until the car could be removed from the track.


Under USAC rules, laps on the yellow flag do not count, so as a result the cars and their drivers circled the track awaiting the final three laps to begin.


At this point in the race, Nordhorn was in first place, a lead which he had taken from Snider only the lap before.


After circling the track for about four revolutions, the green flag was finally dropped.


It was here that George Snider shot around Nordhorn and into the lead. Nordhorn seemingly had momentary engine trouble but quickly recovered only to finish second.


On his return lap around the track, Nordhorn pulled his sprint car up in front of the control tower and jumped out. He then ran up the stairs, followed closely by his mechanic and one member of his crew.


Once in the tower, Nordhorn exclaimed, “You're not going to do that to me this time.”


After a few moments Nordhorn settle down and discussed the problem in a quiet manner with USAC officials.


At one point in the discussion Nordhorn remarked that this was not the first time of flagman had cost him prize money.


After about a 30-minute discussion USAC officials declared George Snider the winner with Nordhorn finishing second. They did state, however that Nordhorn had the right to protest the results.


Probably the loudest protesters of the afternoon where the fans, most of whom felt that Nordhorn was in the right.


The afternoon’s activities began with four heat races and a 12-lap semi-feature prior to the start of the main event. All races one off like clockwork due to the strict time schedule of 's Wide World of Sports.