Race Tracks from the Past; Remembering Ord 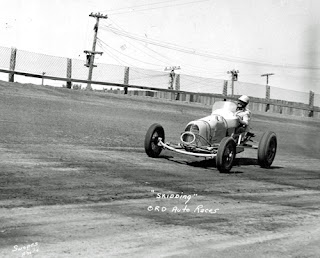 Mike Salay at the Valley County Fairgrounds
﻿
by Lee Ackerman
Omaha, Neb. — The history of auto racing in the Midwest is deeply tied to tracks at county fairgrounds. Many fairground tracks started out with horse racing, but migrated to automobile races as the automobile gained in popularity. One of Nebraska’s most famous early auto racing facilities was located at the Valley County Fairgrounds in Ord.


The first auto race staged at Ord in 1926 when a three-day show was staged. Leonard Krebs of Otis, Kansas won the first two days with the third day being rained out after the first event. It was reported that 17,000 fans attended the three-day affair. From 1926 until its final season in 1964, despite not racing every year, Ord would see some of America’s best dirt track racers visit the historic track.

In 1927 and 1928, Omaha’s John Bagley won two of three events each year. The year 1929 saw Sioux City native and later Omaha resident Sam Hoffman take two out of three features. Unfortunately, driver Sam Larson was killed during qualifying. The cars of these days had few if any, safety features and the drivers usually drove with leather helmets, which were no protection if the car flipped or the drivers were thrown from the car.

Big name drivers continued to appear at Ord in 1930 and 1931, but it was the legendary Johnny Gerber of Stanwood, Iowa, who dominated both years winning all six features. The first race of 1930 saw an especially stout field of cars, in a race sanctioned by AAA (the forerunner to USAC). In that race Gerber had to contend with the likes of Sam Hoffman, Johnny Kreiger, Leonard Krebs, Arch Powell, Bert Ficken and others. AAA did not sanction the races the next day but it didn’t stop Gerber in setting a new track record of 26.46 seconds. This broke the track record set by John Bagley in 1928, and led to a war of words between the Ord Quiz and the Omaha World Herald. The World Herald ran an article calling Ord, a bullring, and the Quiz responded by pointing out that Omaha promoter D. C. Olney had failed to attract either racers or fans. 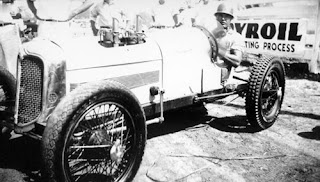 
The Loup Valley Fair, as it was sometimes called, was discontinued from 1932 to 1934 because of the depression, despite large crowds at the auto races. In 1935, racing resumed at Ord under the direction of Clyde Baker, who was the race superintendent at Ord from 1929 through 1951. The great Lloyd Axel who would become the winningest driver in Ord racing history dominated the 1935 to 1937 era of racing at Ord. Also winning at Ord during this time was Joie Chitwood, who would later go on to found the famous Joie Chitwood Auto Thrill Show.

The Midget era started at Ord in 1938 and ran off and on at Ord through 1956. That first year of Midget racing saw both day races dominated by Nineveh, Ind., native Harry McQuinn. McQuinn defeated a strong field of drivers including Carl Forberg, Danny Oakes, Eddie Kracek and others. Of course, 1938 just happened to be the year McQuinn scored an amazing 61 feature wins in a Midget. He would later drive in 10 Indy 500’s and after retiring as a driver, become Chief Steward at Indy. Indy 500 star Lloyd Ruby and Nebraska Auto Racing Hall of Famer Bobby Parker picked up multiple wins in the Midgets during this era. Open wheel legends Jud Larson and Bob Slater were also among the participants. 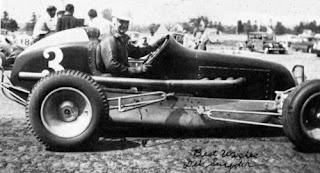 
The Big Cars (forerunners to the modern day Sprints) made several appearances at Ord from 1947 to 1951 and featured future IMCA Sprint Car national champions, Deb Snyder, Bobby Grim and and Jerry Blundy. The legendary Deb Snyder closed out the era of Big Car racing at Ord, sweeping both events in 1951. Grim did not win at Ord, but was behind the wheel of Hector Honore’s City of Roses Special. Later after gaining Bardahl sponsorship, the Grim-Honore combination would dominate IMCA Big Car Racing winning four straight national championships.

From 1947 to 1949 Ord showed its versatility by having a series of motorcycle races. The 1947 event saw a rider from Omaha named Don Greenwood win an exciting feature over Cliff Edwards. Greenwood turned out to be none other than Der Merkley, who in addition to being a good motorcycle rider was an accomplished Midget racer.

The hot rods came to Ord in 1948. The 1948 races were sanctioned by the Colorado Automobile Racing Club and were dominated by future Indy Car driver Keith Andrews. In 1949, the hot rod races featured the Nebraska Hot Rod Racing Association (NHRRA). Some of the top racers of that group were Gordie Shuck, Harry Hoff, Bob Rager and Chuck Sears. But for those two races at Ord in 1949, the races were totally dominated by two cars from California. Dubbed “the California Gold Dust Twins,” Roy Prosser, driver of one of the California cars not only set a track record for hot rods of 25.3 seconds but also won every race he entered.

In 1952, Modified Stock Cars or coupes started racing at Ord. While racing at Ord was entering its twilight, and races were not held every year, stock cars and coupes would dominate the action through 1964, the last year of racing at Ord. Some well-known Midwest Stock Car drivers would race at Ord. In 1952, Don Pash, Carl Lillenthal and a driver from Harlan, Iowa, named Johnny Beauchamp would win at Ord. Over the next few years, names like Lloyd Beckman, Bud Burdick, Bobby Parker, Harry Smith and Bill Fann would test the Ord oval.

The track and grandstands at Ord are long gone, but there is no doubt that Ord in its days held some of the best races in the Midwest.

Special Thanks to Ray Valasek and Bob Mays co-authors of Valley County Thunder, The History of Racing at Ord, Nebraska published by Fastrack.