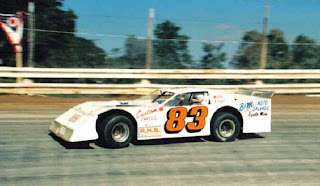 Kraft opened the season impressively as he scored three consecutive victories at I-55 Speedway (Pevely, Mo.), Bolivar (Mo.) Speedway, and I-44 Speedway (Lebanon, Mo.). However, Moyer notched a runner-up finish and third-place showing in two of those events before winning at Monett (Mo.) Speedway and held the top position after the first four events.

Both Kraft and Moyer failed to compete in the fifth event, June 12 at Salem (Ind.) Speedway, which Jim Cooper won, finishing ahead of Noel Witcher and Dick Potts.

Victories July 2 at 34 Raceway Park (Burlington, Iowa) and July 3 at the Southern Iowa Speedway (Oskaloosa) combined with a runner-up finish at Davenport (Iowa) Speedway and a third place showing July 1 at Marshalltown (Iowa) Speedway pushed Kraft into the series point lead with 300 markers.

Larry Phillips, who won the Marshalltown and Davenport events, slipped into second with 284 points, one ahead of Moyer.

Moyer scored back-to-back victories on September 16 at Bolivar and September 17 at I-44 Speedway respectively, but Kraft placed fourth and fifth in the two races to remain 49 points ahead of Moyer.

Both Moyer and Kraft failed to compete in the season finale, September 25 at Eldora Speedway (Rossburg, Ohio), giving Kraft the season title with 403 points. Moyer placed second with 359 followed by Phillips and Ken Essary.

Kraft led all drivers with six feature wins while Moyer was second with three. Phillips won two races while Cooper and Doug Ault (Eldora) came away with one victory each.

In four years of USAC late model racing, Moyer leads the all-time series with 12 victories and 19 top-two finishes in 32 events.