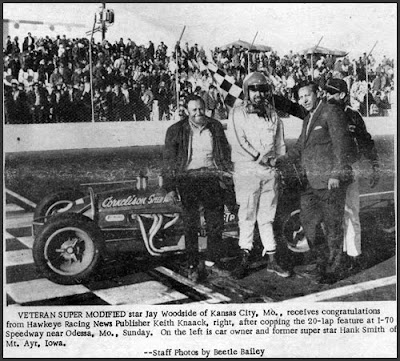 Sutcliffe went on to win the first heat and it looked like he would walk away with the 20-lap feature as well. It’s just Jay Woodside, the Kansas City wonder boy, had other ideas.

Sutcliffe began “smoking his tires” from losing traction going into the first turn and Woodside took advantage, as he shot under the leader on lap 15 to take the lead and the eventual checkered flag. 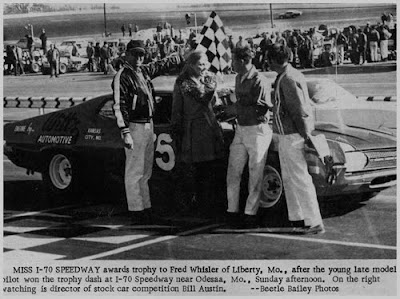 On the late model side of things, it was 1969 champion Fred Whisler of Liberty, Mo., in a new Ford, who let everyone know he will be the man to beat again in 1970.

Whisler zoomed to a second place finish in the second heat, came back to win the trophy dash and then drove a brilliant race to cop the 20-lap feature event and taking home the largest chunk of the purse.

Top attraction in both divisions excited the fans as crashes and spinout were numerous. Almost everyone was having difficulties after the long winter lay-off.

Eddie Leavitt of Kearney, Mo., showed he will be a serious threat in super-modified racing this year as he copped the second heat, the trophy dash and pushed Sutcliffe across the finish line for third place in the feature.

In late model action, Bob Hilmer of Dysart, Iowa, the defending champion at the Iowa State Fairgrounds track in Des Moines, Iowa, grabbed the win in the first heat and Terry Bivins of Shawnee Mission, Kan., let it be known that he would be tough to beat this season as he won the second heat.

Bivens was by far the fastest late model during the afternoon but had handling problems in the feature with his 1969 Chevelle and was no competition for Whisler. Roy McClellan of Kansas City, made a good showing with a third place finish in the both the trophy dash and feature in his 1968 hemi-powered Plymouth.