by Kyle Ealy
St. Paul, Minn. – There was a time when long endurance stock car races on a half-mile track were the norm.

It was quite common to see 100, 150, 200 or even 250 lap races ran at some of the bigger dirt (and very dusty) venues throughout the Midwest. Usually, most of these races were run on a Saturday or Sunday afternoon when the temperatures were in the 90’s.

Starting in the mid-1960’s, as summer was starting to wind down and fall was on its way, the Minnesota State Fair in St. Paul would host two of the bigger long endurance races for the IMCA new model stock cars on the half-mile asphalt. As was the rule back then, the more laps, the bigger the prize and both of these races, the Northland 300 and the North Star 500, were two of the higher paying races on the IMCA national circuit each year.

The North Star 500 was considered the grand daddy of the IMCA stock car season. It has an interesting history, but I’ll save that for another time…

The Northland 300 was usually scheduled on or near Labor Day weekend and normally, the 500-lap race would follow a day or so after. You could probably say that the 300-lap race was “merely” a warm-up before the big one.

The Northland 300 race started in 1966 but upon further research, the first 300-lap race at the fairgrounds was actually held the year before. The aptly-named Paul Bunyan 400 was run in June of 1965. It was actually two races; a 50-mile race (100-lap) for the IMCA sprint cars and a 150-mile race (300-lap) for the IMCA stock cars. Harold Smith of Dayton, Ohio won the sprint car portion of the program in the afternoon while Ramo Stott of Keokuk, Iowa led all 300 laps in taking the stock car nightcap. A crowd of 13,723 packed the grandstands to see what I’m sure was a full day of racing.

With the great success that it had, the next year, Northland Oil Company jumped on board to sponsor the race and the Paul Bunyan name, while catchy, was tucked away.

Amazingly, it was Derr’s first victory in over three years at the half-mile track. The win was worth $1,250 to the six-time IMCA national champion but more importantly, vaulted him back into the IMCA point lead over his fellow townsman Ramo Stott; a point’s lead he would not relinquish on his way to his seventh national championship.

Stott, a victim of a prerace warm-up mishap, which forced his regular ‘66 Plymouth out of commission with a bent frame and busted radiator, was plagued with car trouble throughout the race and actually competed in three different cars, all of which were borrowed or begged. He would finish seventh in a car originally driven by Hank Melborn of Kansas City.

Soon to be NASCAR star Dave Marcis of Wausau, Wis., would finish behind Derr at the finish line followed by Bill Mueller and Norm Setran, both of Minneapolis, and Phil Cronin of Houston, Tex.

As nice a guy as Ramo Stott was, he showed up with a chip on his shoulder and looking for revenge when the Northland 300 rolled around next year.

On September 2, 1967, he not only got his revenge on Derr, whipping his arch-rival by two laps when the checkers flew, but he also set a new world record in the process. In qualifying, Stott set a new one-lap record on a half-mile by timing in at 22.68 seconds, erasing the old mark set two years ago at the same track.

After wrecking his car the year before, the victory was satisfying to Stott. “I wrecked my car here last year during warm-ups,” he mentioned. “I was running really well at the time and I can’t help but feel that wreck cost me the national championship.”

“I actually prefer asphalt to dirt tracks,” he pointed out. “I’ve always run well on them and I guess today was no exception.” Stott would collect $1,250 for his dominating performance.

Stott’s car, according to one driver who wished to remain anonymous, was a “picture of perfection” on this day. He lapped Derr twice, the first time on the 180th lap. He gave up the lead to Derr on lap 207 when he pitted briefly for a tire change but came roaring back to grab the top spot back from Derr only two laps later. Stott would increase his lead to two laps by lap 246.

Despite the whipping he received, Derr would hang on to second place while veteran Ole Brua of Albert Lea would take third. Wisconsin asphalt ace Jim Sauter of Necedah would grab fourth and 1966 IMCA rookie of the year, Bob Malechek of Marshalltown, Iowa would round out the top five. 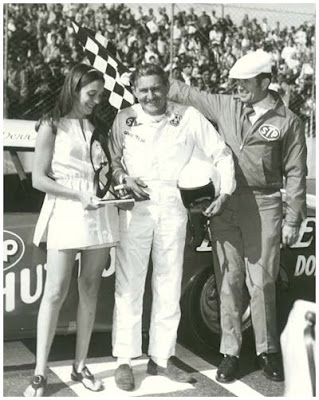 
On Saturday, August 31, 1968, Ernie Derr was back in victory lane at the Northland 300. In what was a mediocre race at best, Derr set a new IMCA record on the half-mile completing the 300 laps in 2 hours, 3 minutes and 38 seconds. Driving a 1968 factory-built Dodge Charger, the victory netted a Derr a first-place check for $1,400.

Stott, after dismantling Derr the year before, was a non-factor in the race. He led the event at the beginning but yielded the lead to Derr around the 50-lap mark. Midway through the race, Stott would have to pull to the infield to change a tire and would spend the rest of his day playing catch-up.

In fact, the only “excitement” of the day happened when three members of Norm Setran’s crew were burned at the midway point of the race when his ’68 Ford Torino burst into flames while refueling.

None of the pit crew were seriously injured and miraculously, Setran (and race car) was able to continue and was soon back on the track. Engine trouble later on would finish his day.

In 1969, Ramo Stott left IMCA for greener pastures (ARCA), leaving the old fox, Ernie Derr, to have it all to himself. When the Northland 300 rolled around on August 24th, he was the overwhelming favorite to claim his third victory.

Derr, however, would lose his brakes early in the contest, which would end his chances. In fact, the top five drivers in points for IMCA didn’t fair well at all. Darrell Dake, a top-five IMCA pilot, was in the top five most of the day until his rear end went out and he too, finished on the hook. Cedar Rapids, Irv Janey had the best showing that afternoon, finishing seventh.

Marv Marzofka took advantage of what was an “off day” for the IMCA stable of hot shoes to grab the victory. Hailing from Nekoosa, Wis., Marzofka was no stranger to half-mile asphalt ovals and he showed why. He not only took home the $1,700 first place prize money but also broke the half-mile mark set by Derr a year earlier by powering his 1969 Mercury Cyclone around 300 times in 2 hours, one minute and 14 seconds.

Marzofka enjoyed himself so much at the ’69 race he made sure the event was on his social calendar for the 1970 season. Driving a 1969 Ford Torino, Marzofka timed in fastest among the 40 cars entered with a clocking of 21.68 seconds.

When the checkers waved, it was Marzofka out front again for the second year in a row. Finishing the race in 2 hours six minutes and 20 seconds, Marzofka cashed in $1,825 for his efforts that Saturday afternoon, August 29th. 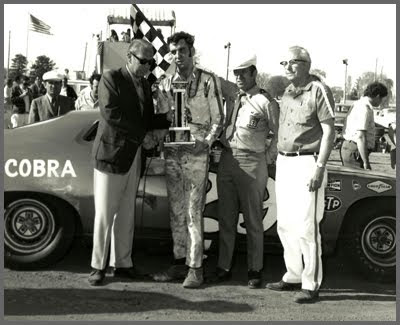 Ron Hutcherson of Keokuk, Iowa would win the Northland 300 on August 28, 1971 and then score the 250-lap victory in Des Moines, Iowa (shown here in victory lane)the next day. - Photo courtesy of Lee Ackerman

After being “shut out” for two year in a row, IMCA drivers got back on track for the 1971 Northland 300 race. When Keokuk, Iowa’s Ron Hutcherson pulled into town on Saturday, August 28th, he was on a hot streak. When “Hutch” left St. Paul later that evening, he hadn’t cooled off any. Hutcherson led most of the race, touring the half-mile pavement in 2 hours, three minutes and 42 seconds and taking home $1,825 of a total $11,000 purse.

Not satisfied with one win for the weekend, Hutcherson packed up his gear immediately after the race and headed four hours south to Des Moines, Iowa. That hot and steamy afternoon, he promptly led 217 of 250 laps in picking up the win on the half-mile dirt of the state fairgrounds. He won by two laps over a pair of Derr’s, Mike and Ernie, picking up a check for $1,250 in the process.

If you stop and think about it, Hutcherson raced 550 laps in a 24-hour period, something that would be unheard of in today’s era. He also competed on both asphalt and dirt in that same time frame…and won both of them in dominating fashion.

The seventh annual (and final) Northland 300 would take place on August 27, 1972. One of the odds-on favorites for the race that year was Dick Trickle of Wisconsin Rapids, Wis. Trickle was having a season that most drivers could only dream of. When he pulled his rig into St. Paul, Trickle was already sitting at an incredible 54 feature victories on the season. 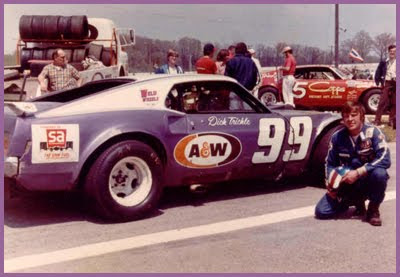 
The 30-year-old speedster made his appearance at the historic half-mile a memorable one making short work of a stellar field that afternoon and winning handily. Front-row starter Jim Sauter grabbed the initial lead only to be passed by Trickle on the 28th circuit. From there, Trickle would gun his 1970 Mach I Mustang around for the remaining 272 laps on his way to win number 55. He would earn $2,000 for the victory plus an additional $100 for setting fast time.

Try as he might for a third straight victory, but Marv Marzofka would have to settle for second place while Tom Reffner of Rudolph, Wis., grabbed third and Jim Sauter would take fourth.

Trickle would go on to amass 67 feature wins that season besting the old mark of 58 feature wins by Ramo Stott.

The Northland 300 was a unique race in the sense that it was an IMCA-sanctioned event, but it didn’t necessarily mean that an IMCA-sanctioned driver ended up in victory lane. It started as an “south of the border” IMCA-dominated race in the early years but as their top stars (Derr, Stott and Hutcherson) moved on to other sanctions of racing, it became much more of a northern dominated (Marzofka, Trickle) event.

Still, it was as star-studded as they came. If you consider that three of the greatest short track drivers ever to get behind the wheel of a race car, Derr, Stott and Trickle, all have their name etched on that Northland 300 trophy.

There aren’t many big-name race events that can boast of that worthy honor.