ARCA Takes to the Dirt in Nebraska 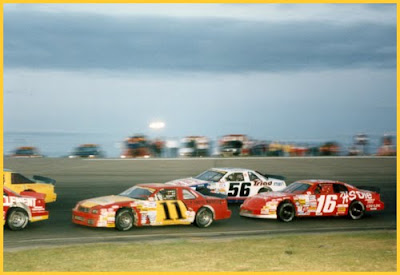 Andy Hillenburg (11) races with Tim Steele (16) at I-80 Speedway in Greenwood, Neb., on June 25, 1995. Hillenburg would win the 1995 series title and Steele would claim the ARCA championship three times in his career. - Photo courtesy of Lee Ackerman

by Lee Ackerman
Omaha, Neb. - On June 24 & 25, 1995 drivers from thirteen states descended on I-80 Speedway near Greenwood, Nebraska for a race sanctioned by the Automobile Racing Club of America (ARCA). This would be the first and so far only appearance by ARCA in the Cornhusker State. ARCA is a stepping stone to NASCAR. Many drivers have went on from ARCA to successful careers in NASCAR, the most notable being 1968 & 69 ARCA champion, the late Benny Parsons who would win the 1973 Winston Cup Championship. While most of ARCA’s races are run on asphalt tracks, they still occasionally run a race on the dirt. Several Midwest dirt track stars were entered in the event and for the most part made a good showing. The event would carry a purse of $98,390.

Qualifying was held on Saturday, June 24 with Midwest star Bob Hill of Story City, Iowa the 1993 NASCAR Busch All-Star Tour Champion setting fast time at 82.988 miles per hour in the Clement Monte Carlo. Harris DeVane of Cuthbert, Georgia qualified second in his Ford Thunderbird, Eric Smith of Bloomington, Illinois put his Thunderbird in third place, and Washington, Missouri’s Ed Dixon a veteran of the Midwest dirt tracks qualified his Pontiac Grand Prix fourth. Beatrice driver Johnny Saathoff (who would go on to become one of the nation’s best modified drivers) qualified in 15th starting position in Bob Hill’s back up car, and Leon Zeitner of Omaha qualified Steve Kosiski’s Olds Cutlass in 23rd place. Kosiski was racing Friday and Saturday at the Route 66 Shootout in Joplin, Missouri.

On Sunday, June 25 a crowd estimated at 4,500 turned out at I-80 despite threatening weather, which included a short rain delay, to watch the ARCA Conoco 200. In support action, Joe Kosiski of Omaha won the 25-lap dirt late model feature. A field of 36 drivers was scheduled to take the green in the Conoco 200 with local star Steve Kosiski relegated to starting last because someone else had to qualify his car.

Pole-sitter Bob Hill grabbed the lead and led the first 37 laps before retiring with a broken axle. Hill would return to the race many laps down and complete 177 laps finishing the race in 26th place. After the race Hill would say, “We were just cruising. The car was good. I was just putting in laps; I wasn’t pushing it at all. It just broke apart.” Fourth starting Ed Dixon of Washington, Missouri another dirt track specialist grabbed the lead and held the lead until pitting on lap 113 under the yellow flag. Frank Kimmel of Jeffersonville, Indiana, who would become "Mr. ARCA" in later years by winning 8 ARCA Championships(and he’s still going strong) assumed the lead. Kimmel held the lead until Dixon got by him on lap 149 and held on for the win.

The drive of the day was put on by Omaha’s Steve Kosiski as he roared thru the field from his last starting position passing cars left and right and had moved all the way up to third by the he also pitted under yellow at lap 113. Kosiski came out of the pits in seventh place and by lap 173 was back up to third place where he entered into a battle for second place with Kimmel. In the closing laps of the race, Kosiski said, “I just got a nice roll coming off the corner and carried it in far enough to put me along side him.” Kosiski went on to take the position from Kimmel.

At the end of the race it was Dixon, Steve Kosiski, Kimmel, Harris DeVane of Cuthbert, Georgia, and Concord, North Carolina’s Andy Hillenberg rounding at the top five. Hillenberg who won the ARCA Daytona 200 to start the season would take his Fast Track Driving School Chevrolet on to the 1995 ARCA National Driving Championship in his rookie season with the series.


Dixon commented after the race, “It was a slick race. We had a little rain fall, but it tacked up real well and it just ended up great.” Kosiski commented after the race, “Practice, when I wasn’t here, kind of made everybody gun shy to run the middle and the top. I could see the track was different from what I was told. So I rode the middle of the track and with everybody kind of hugging the bottom, the drivers had to set and brake for each other. I just went around them.”

Other notable drivers who participated in the event were Tim Steele, the 1993 ARCA Champion (he would also later win the championship again in 1996 and 1997). Steele qualified his Ford Thunderbird in 25th starting position. The Cooperville, Michigan native would have to settle for a 23rd place finish as his Thunderbird expired with engine failure after 188 laps.

Bobby Bowsher of Springfield, Ohio, the 1992 & 1994 ARCA Champion faired better as he qualified his Ford Thunderbird in 9th starting position and ended up running all 200 laps logging a 6th place finish.

The race lasted 1 hour 43 minutes and 25 seconds with Dixon’s margin at the checkered flag being about 1 second. There were 8 cautions for a total of 42 laps with Hill, Dixon, Kimmel and Dixon again being the only race leaders.