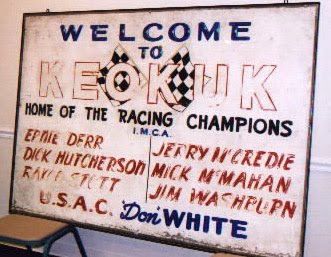 Keokuk, Iowa – Keokuk is not exactly a name that conjures up visions of famed auto races, like the names of Indianapolis or Daytona or Atlanta or Ontario, Calif.

But this southeastern Iowa town of nearly 15,000 persons has produced at least one national stock car champion in each of the past 17 years and 20 in the past 22 years - 25 championships in all.

Say the word "Keokuk" anywhere on the nation's stock car racing tracks and most of the drivers will know that you are talking about the home of champion drivers.

How did Keokuk produce so many champions - more than most big cities in the nation?

Perhaps it all started in 1948 when Don White became interested in stock car racing while watching his father Gene work on cars in his garage.

The younger White started by driving a "Junker” at Burlington and two nearby Illinois tracks,

Then one night he went up to Davenport to watch the prestigious International Motor Contest Association races. White decided right there, "That's for me."

Ernie Derr was bitten by the racing bug next and it wasn't long before the White - Derr battles on the-track became widely publicized and this attention apparently sparked an interest by others in Keokuk.

The two aren't winning as many races as they once did but Derr, who will be 53 on November 29th, - still hasn't quit.

White, 48, is trying to extend his achievement of being the all-time feature winner in the United States Auto Club (he has won 50) stock car circuit.

Two of Derr’s boys, Mike and Russ, both in their 20s, are the youngest drivers from Keokuk to be involved in national competition.

Dick Hutcherson (42), who now builds stock cars in Charlotte, N.C., opened his career at the Keokuk track in 1956 and started racing late-models in 1959.

Dick may be the best driver ever at Keokuk, although that subject would spark one tremendous argument. He won IMCA championships in 1963 – 64 and then was asked by the Ford Motor Co., to compete in NASCAR (National Association of Stock Car Racing). Dick, who has never finished below third in point standings at any time during his career when he raced full-time, was third in 1965 and second in '67 in NASCAR points.

Ramo Stott (40) had some wild races with Dick at Keokuk's quarter-mile track back in the '50s. In IMCA competition Stott was always a bridesmaid, never a bride. But when he left for ARCA in 1970, he proved he could be a champion, capturing titles that year and in ‘71.

Not all Keokuk drivers credit White and Derr for their interest in racing. Gordon Blankenship and his brother Lem report their interest stemmed from helping Stott work on his jalopy racer in the '50s.

"Their dad, Pete Blankenship, lived near the Keokuk track, explains Ramo. “I left my car at their place and Pete and the boys helped me work on it when we weren't playing pinochle. Racing was a lot more, fun in those days."

When Lem grew up, he worked in Ramo's shop and later drove one of Ramo's late model cars in USAC.

Derr, who has won more than 300 features, and White are hard-pressed to explain why Keokuk drivers have been so successful.

"The most successful race drivers are those who not only have the ability to, drive and the desire and determination to win but are the ones who build and maintain their own cars," says White.

The top drivers from Keokuk have those credentials. Derr points out those four drivers - himself, White, Stott and Dick Hutcherson – were factory-backed at one time.

“That should say something about the quality of drivers here," he says. Manufacturers backed only those drivers who are in the top five to 10.

“Heck, I’d like to name my new garage (where he builds and maintains his race cars) the ‘Dodge House’, they (Dodge) helped pay for it," laughs Derr.