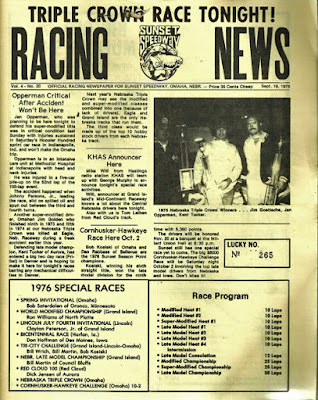 By Lee Ackerman
Omaha, Neb. - In 1973 Lyle Kline and Gaylen Brotherson, co-owners of Sunset Speedway, came up with an idea for a State Championship race. The race was called the Nebraska Triple Crown Championships and featured championships in 3 separate divisions, Late Models, Modifieds and Sprint Cars. Drivers from tracks all over the state of Nebraska were eligible for the event which would pay a total purse of $5,000.

The inaugural event was on Sept. 14, 1973 with wins going to Bill Wrich of Kennard, Neb., in the Late Models, Wilbert Hecke of Kearney in the Modifieds and Dick Sutcliffe of Kansas City, Mo., in the Sprint Cars. Seventy-five drivers signed in for the event, representing Cornhusker State tracks in Lexington, Red Cloud, Grand Island, Hastings, Lincoln, Eagle, York Norfolk, South Sioux City and Nebraska City as well as Sunset.

Kline and Brotherson were excited about the outcome of the first event, “We were very pleased with the entire program,” said Kline. Brotherson added, “It came off beautifully due to the drivers, who were experienced drivers and who knew how to react to a foreign track.” The top five in Late Models were Wrich, Bob Kosiski, Randy Sterner, Glenn Robey and Keith Leithoff. Following Hecke home in the Modified feature were Don Weyhrich, Ken McCarty, Gene Brudigan and Jim Goettsche. Don Maxwell, Wayne Holz, Gary Dunkle and Vince Kelley rounded out the top 5 behind Sutcliffe in the Sprint Car main. 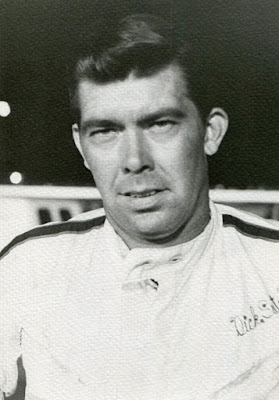 Dick Sutcliffe of Greenwood, Mo., was a two-time Nebraska Triple Crown winner ('73 & '74) in the sprint car division.
On September 15, 1974, at the second running of the event, veteran Sprint Car driver Dick Sutcliffe showed that he hadn’t forgotten the way around Sunset Speedway as he successfully defended his Sprint Car championship. Lloyd Beckman, Ed Bowes, Wayne Holz and Jim Golden followed. Dick Sutcliffe was inducted into the National Sprint Car Hall of Fame in 2001.
New champions were crowned in the other two divisions. Dean Ward of Grand Island passed defending Modified champion Willie Hecke with three laps to go to claim the top prize in the Modified feature. Ron Williams, Lynn Grabill and Gene Brudigan rounded out the top 5.
If you were looking for a dark horse to win one of the championships, the fans got it in the 50-lap Late Model feature. Aurora, Nebraska’s Kent Tucker grabbed the lead and looked like a sure winner until he and another competitor took each other out with five laps to go. Perennial Sunset Speedway point champion Bob Kosiski was a contender until the halfway mark when his engine let go. Twenty-four year-old rookie driver Jerry Wancewicz took the lead with five to go and held on to beat Ron Tilley for the win and his biggest win to date. Wayne Propp, Keith Leithoff and Bill Martin rounded out the top 5. 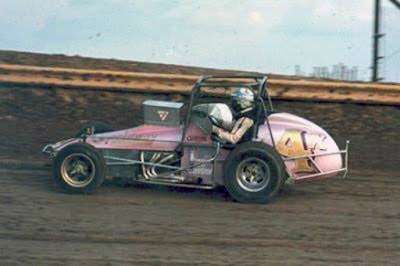 Jan Opperman, piloting the Speedway Motors 4x, dominated a stellar field of sprint cars in the 1975 Nebraska Triple Crown Championships.
The 1975 edition of the race featured a driver who became a racing legend. Jan Opperman had been at Sunset in 1974 at the USAC Midget race but his ride hadn’t made it so he had not raced at Sunset prior to the ‘76 Triple Crown. It really didn’t matter much as Opperman, at the wheel of the Speedway Motors 4x, started deep in the field and had the lead by the first lap. Opperman went on to Sprint Car portion of the event followed by a pair of South Dakota hot shoes in Roger Larson and Darrell Dawley. Rounding out the top five were Dick Morris and Eldon Rhoten. Jan Opperman raced twice at the Indianapolis 500 before being badly injured in the 1976 Hoosier Hundred. He was a member of the inaugural classes inducted into the National Sprint Car Hall of Fame and the Nebraska Auto Racing Hall of Fame.


In Late Model action, Aurora’s Kent Tucker picked up his first win at Sunset in taking the 50-lap late model feature. Ed Morris, Jerry Wancewicz, Mike Houston and Glen Robey rounded out the top 5. In the Modified portion of the show it was Grand Island’s Jim Goettsche winning over the Buck 98 of Don Weyrich of Norfolk followed by Ken McCarty. 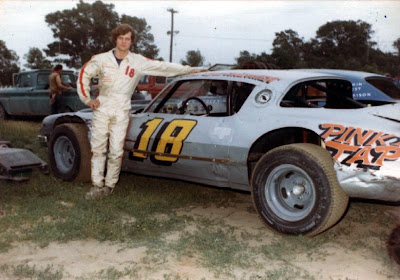 Tom Bartholomew of Waterloo, Iowa took home top honors in the 50-lap late model feature of the 1976 Nebraska Triple Crown.
On September 12, 1976, a crowd 1,810 was on hand for the fourth running of the Triple Crown.
In Sprint Car action, Des Moines Lenard McCarl appeared to be the car to beat but experienced mechanical problems. Lincoln’s Lonnie Jensen picked up his first Triple Crown win. Minnesota’s Jerry Windom, Norfolk’s Kim Lingenfelter, North Platte’s Ron Williams and Lincoln’s Gary Dunkle would follow.
Tom Bartholomew of Waterloo, Iowa picked up the 50-lap Late Model feature as he defeated Bob Kosiski, Randy Sterner, Don Styskal and Ron Tilley. Heats went to Bob Kosiski, Jerry Wancewicz, Bill Chrisman and Al Druesdow. Larry Molzen of Le Mars, Iowa wheeled his #00 Modified to the win with eight starting Bob Layne of Kansas City finishing second and Kim Lingenfelter third.
1977 was the final year of the Triple Crown and there certainly were some fireworks in the Late Model feature as Ron Tilley and Dave Chase seemed to disagree over some real estate. At the end of the 35-lap late model feature it was the old veteran Bill Wrich of Kennard, who came from near the back of the pack to catch Kent Tucker with two laps to go and take home the win. Jerry Wancewicz, Bill Chrisman and young Joe Kosiski rounded out the top five.
In the Modified feature, 1975 race winner Jim Goettsche had to hold off the hard-charging Bobby Layne to preserve the win. Mike Shafer, Randy Droescher and Ray Haase followed. In the Sprint car portion, it was Don Weyhrich moving up the Sprint Car ranks from the Modifieds who put his famed $1.98 in the winner’s circle. Defending race champion Lonnie Jensen was second with Bill Mellenberndt, Rich Brahmer and Jim Goettsche doing double duty rounding out the top five.
During the race’s five-year history, it provided eastern Nebraska race fans with some fast, exciting year end racing.