Despite rain in the Soup, the 2009 Alphabet race was a classic 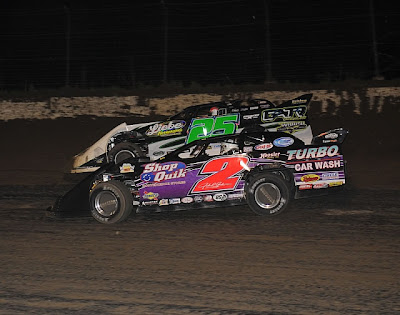 John Anderson (2) and Chad Simpson (25) do battle during the main event of the Alphabet Soup Race at I-80 Speedway. - Lloyd Collins Photo
by Lee Ackerman
Omaha, Neb. - One of the biggest dirt late model races of the year in the heartland is the annual Alphabet Soup Race at I-80 Speedway near Greenwood, Neb., on Memorial Day Sunday. This year (2009) it was postponed for over 2 hours because of rain showers, but the rain did nothing other than make for one heck of a race. Promoter Ed Kosiski’s crew took over after the showers that hit just after the first session of hot laps and gave the drivers and fans a great, tacky track.

The race gets its name from acronyms of the different regional racing series that participate in the annual event. This year the soup was made up of the World Dirt Racing League (WDRL), the Midwest Late Model Racing Association (MLRA) and the National Championship Racing Association (NCRA). Sixty three late models were on hand for this year’s version of the Soup race. This meant seven heat races. Despite a somewhat wet track at the restart of activities, as the night wore on the racing surface would get better and better. Heat one would be a run-a-way as John Anderson took off from the pole position and and simply left the rest of the field behind. Aaron Seabaugh and Joe Kosiski would finish second and third. Heat two would go to multiple-time MLRA champion Alan Vaughn of Belton, Missouri. Vaughn would won out over another multi-time champion of both the MLRA and NCRA in “the Shark” Al Purkey. Jerry Warner would pick up the win in heat 3 with the best run coming from “the Joker” Mike Collins of Council Bluffs who charged up from his seventh starting position to grab second. Ronnie Wallace used the outside front row starting position to his advantage and went on to take heat 4. “The Marquette Missile” Kyle Berck charged from his ninth starting position to take second. Defending WDRL champion Chad Simpson came from outside row 2 to take the fifth heat over Missouri’s David Turner who started eighth. Jeremy Grady would pick up heat six over Jason O’Brien. I-80 regular Craig Preble would win the final heat with Aurora’s Mike Wiarda starting 7th and finishing second.

Since cars transferring from the heats to the feature was determined by passing points and not necessarily how they finished in the heats the following 8 cars, who had earned the most total points in the heats would transfer to the pole dash which was ran later in the evening. Those cars were Mike Collins, Chad Simpson, David Turner, Kyle Berck, Mike Wiarda, Alan Vaughn, Ronnie Wallace and Jeremy Grady. Ten other cars transferred to the feature from the heats for a total of 18. With 63 late models in the pits it would require 3 consolations races to finish filling the field. Only the top 2 from each consolation race would transfer to the feature. Because only two cars from each consolation race transferred to the A this provided the fans with some great racing and it would not be unusual in these races to see three and fours cars fighting for the last transfer position as the track had become very race.

Consolation 1 went to Josh Most driving a Bryant Goldsmith back up car with Travis Dickes also transferring. Wisconsin’s John Kaanta, (who had been edged out by Chad Simpson for the 2008 WDRL title) would take consy number two with Shawn Hawker in tow. The final consolation would go to Omaha racing legend Joe Kosiski with Bryant Goldsmith nailing down the 24th and last qualified position. The Iowa-Illinois Taylor Insulation Pole Dash to determine the first four rows of the feature so Mike Collins take the lead from the pole and hold on to grab the pole position for the upcoming 50-lap feature. Kyle Berck would finish second, David Turner third and Mike Wiarda fourth. To fill out the field to a starting field of 30 cars for the 50 lap main event, each of the three sanctioning bodies added two provisional.

The stage was set and a near capacity was about to witness what many would say was the best race they had ever watched at I-80. Sanctioning body officials would also agree it was one of the best races they had ever sanctioned. As they came down for the green it was Mike Collins on the pole flanked by Kyle Berck, Collins jumped into the lead and would maintain that position for 16 laps looking like he may be the man to beat. Chad Simpson was able to get by Collins in lapped traffic but a caution flag put Collins back in front. On the restart Simpson grabbed the lead and was soon by himself out front. Meanwhile behind Simpson a war was been waged between Anderson, Berck and Collins. The three swapped positions over and over again before Collins fell out and would retire from the race.

“We led for 16 laps and I was running fourth battling with Kyle (Berck), when my crank trigger went out,” said Collins. “The front four had pulled away so I think I could have probably finished fourth.” continues Collins.

Then it became a battle for the lead with Simpson, Anderson and Berck in a three way battle with the lead changing but Simpson always holding on to the lead at the line. Then with just six laps to go with Simpson being pressured hard by Anderson and Berck, he jumped the cushion in turn three and four and destroyed his right rear tire and came to a stop in turn four. Simpson would head to the pits and replace the right rear and rejoin the field. On the restart Anderson would be at the point followed by Berck and Al Purkey who had came from his 12th starting position. At the drop of the green, a six-lap shootout commenced, but with four to go Simpson and Eckrich got together coming out of four and Simpson went spinning down the front stretch. John Kaanta had no place to go and ended up hitting the spinning Simpson head on ending Kaanta’s evening. On the restart, Anderson was able to hold off a hard charging Berck and pick up the win bringing to an end one of the best 50 laps of racing seen in the heartland in sometime. Al Purkey would finish third, Alan Vaughn would finish fourth and Denny Eckrich, who had started 25th would finish 5th. 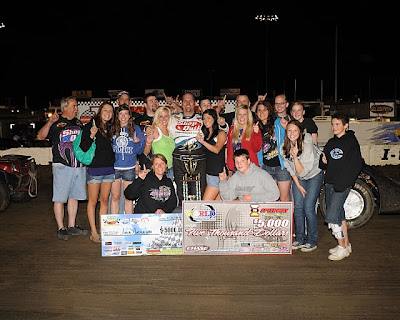 Family and friends help Alphabet Soup Race winner John Anderson celebrate in victory lane. - Lloyd Collins Photo
“That was a phenomenal race the way it played out. We had to battle through lapped traffic on a fine line.” Recalls John Anderson. “I was following Berck and he was fighting it out with Simpson. Just being in that battled was awesome.” Despite a long night, the near capacity crowd was treated to some outstanding and unforgettable racing on a track that allowed for drivers to swap positions all night long. Many fans would state it was one of the best races they had ever witnessed. It truly was a race to remember.