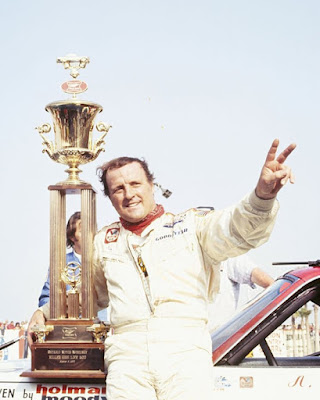 Foyt, Allison and Baker staged a torrid duel for the last 45 laps.

Winner of the Daytona 500 last month, Foyt went into the lead to stay in his Wood Brothers-prepared 1971 Mercury with 15 laps to go after a final pit stop for gas by the trio.

Allison, Hueytown, Ala., was runner-up in a 1972 Chevrolet Monte Carlo, 4.2 seconds back, while Baker, Charlotte, N.C., finished third in his 1972 STP Dodge, nine seconds behind.

“It was a tough day,” Foyt said. “It was a tossup who was going to get that one.”

Foyt had a 15-second lead over Allison before Cecil Gordon of Horse Shoe, N.C., hit the turn four wall on lap 149 and spun into the infield. The yellow flag enabled Allison and Baker to close behind the leader.

When the green flag flew on lap 155, Foyt, Allison and Baker began their thrilling duel to the finish.

When the top three drivers got back on the track, Foyt was in front by 2.9-seconds and never relinquished the lead before the crowd of 68,498 in 80-degree weather.

Richard Petty, NASCAR’s golden boy from Randleman, N.C., lost any chance of victory on human error after pitting on lap 131 for tires and gas. He was the leader up to that point.

After Petty went back on the track, he found that his right rear wheel was no on tight and had to take it slowly before going back in the next time around. Petty, who wound up fourth, was a lap back when he got out again and never made the lap up.