The El Kahir Shrine Race: Racing So Kids Can Walk 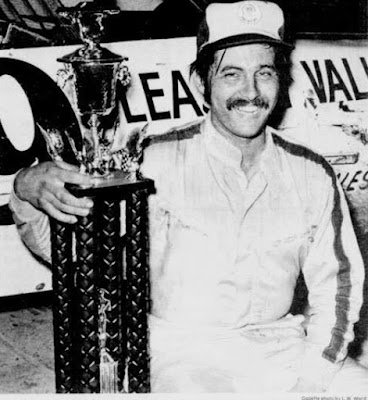 by Lee Ackerman
Cedar Rapids, Iowa - In 1978, the El Kahir Shriners teamed with Promoter Al Frieden and Hawkeye Downs to create the El Kahir Shrine Race with proceeds from the event going to the Shriners’ Children’s Hospital. The first race took place on Tuesday, August 1, 1978.

Fifth-eight late models signed in for the event which paid the winner of the 50-lap feature $1,250. Veteran Ed Sanger of Waterloo got things off to a fast start in time trials as he set a new track record of 23.671 seconds. Bill Beckman of Lisbon was not far behind at 23.779 seconds. Former time trial record holder Curt Hansen of Dike’s evening ended early when he broke a steering arm in qualifying and crashed into the retaining wall ending his night.

Ed Sanger and Bill Beckman lead the field to the green but it wasn’t long and it became apparent the man on the move was Joe Merryfield. By lap 10, the Des Moines chauffeur was up to fifth. By lap 15, he was fourth. On lap 19, he got together with Denny Osborn of Cedar Falls and ended up in the infield. Starter Engel DeKoch ruled a “no-fault” restart. On the restart, Merryfield took second and moved past leader Bill Rice on the 30th lap.

Merryfield was the class of the field with J.J. Smith getting by Rice on lap 45, but unable to run down Merryfield. Following Merryfield and Smith to the line were Rice, Walton and Ed Sanger. 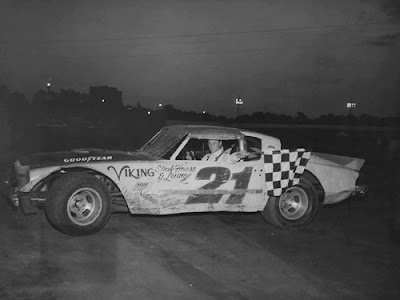 Verlin Eaker won the 1979 El Kahir Shrine race.
Going into the second annual El Kahir Shrine race held on July 31, 1979, one driver had dominated the big events at Hawkeye Downs ever since winning the inaugural Yankee Dirt Classic the previous September. That driver was Mechanicsville’s Verlin Eaker.
Since winning the Yankee at Hawkeye Downs he had added the Miller 100 and the Winston 50 to his trophy case. There would be no reason to believe that he would not be the man to beat in the El Kahir race.

Time trials saw the always tough Leon Plank of Mondovi, Wisconsin set fast time at 23.47 seconds. Bill Zwanziger, Red Dralle, Steve Keppler, Mike Niffenegger and Eaker would round out the top six. Fortunately for the field the top six was not be inverted and it was a heads up start.

Zwanziger grabbed the lead from his outside pole position and stayed there for most of the race. By lap 30, Eaker had moved up to challenge and the two put on a side by side battle that brought the fans to their feet. Finally, on lap 43 Eaker edged to the lead and remained there for the rest of the 50-lap event. On the last lap, Curt Hansen slipped by Zwanziger for second. Steve Keppler of Marion would finish fourth and Plank fifth. The capacity crowd had been treated to another great race at Hawkeye Downs.

In 1980 the format for the race was changed. There were no heat races, just time trials, a trophy dash, a B feature followed by a 100-lap feature. One thing that did not change however was the fact that an Iowa driver who had previously won the World 100, once again won the El Kahir race.

A new track record was set during time trials as Dick Schiltz posted a lap of 23.172 seconds. Marion’s Fred Horn posted a 23.344 just missing the old track record. Fifth fast qualifier Ken Walton won the 6-lap trophy dash with Leon Plank finishing second. A 20-lap B feature was then run to fill the remaining spots in the feature not decided by time trials. Bill McArdle of Hazel Green, Wisconsin won the event with Bob Schulte also advancing to the 100-lap A feature.

The A feature turned out to be not only a great race but may have been decided by carbon monoxide. Ken Walton got the jump from his outside pole position and led the first 12 laps before being passed by Curt Hansen. The Hansen pass for the lead was assisted by the fact that Walton rammed a slowing Mel Morris allowing Hansen to get by on the inside. Hansen and Walton then started pulling away from the field but on lap 23 Hansen’s night was over as he went pit side with mechanical gremlins. 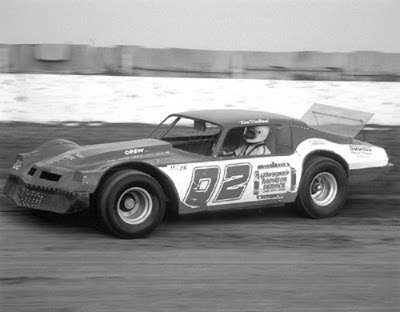 Walton continued to lead the race. The race was interrupted by rain near the half-way point causing it to go under caution for several laps and created vision problems for some of the drivers because of wet visors. The race resumed on lap 55 with Schiltz passing Walton for the lead one lap later. On lap 90, Schiltz suddenly got into the wall hard allowing Walton to pass and go on to take the win. Schlitz held on to second with Wisconsin’s Peter Parker, Tom Hearst and Duane Steffe of Colona, Illinois rounding out the top five.

Things got a bit bizarre after the race. Schiltz went across the scales, then loaded his car but he could not get out of his race car. Schiltz was administered oxygen and taken to Mercy Hospital and later released. It turns out that Schiltz had driven the last 20 laps in a dazed condition because of being overcome by carbon monoxide gas and could hardly remember the last 20 laps.

“Both Curt and Dick were faster than I there at the end,” Walton said after the race. “I ran steady the whole 100 laps and that’s what counted tonight. The rain definitely changed the track. Before the rain, I was running a high groove, but after it ended, I was down on the bottom. It didn’t look like much to the people maybe, but it (the rain) was enough to change the track.” 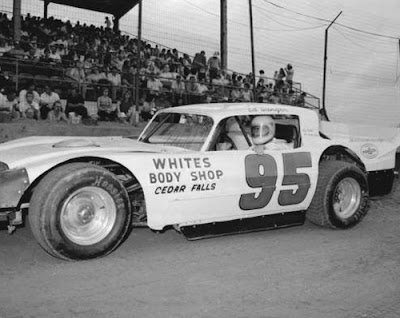 In 1981, both the format for the race and the track hosting the race changed. One thing did not change, for the fourth year in a row a former World 100 winner went to victory lane. The race was moved to the Independence Motor Speedway and they ran no time trials. Ed Sanger, Rick Wendling of Hazleton and Greg Kastli of Waterloo won the heats with Dick Schiltz winning the consolation race.

The 50-lap feature was all Ed Sanger. Sanger took the lead at the drop of the green and was simply gone. Sanger was in lapped traffic within a few laps and pulled away from the field to score an easy victory. Greg Kastli came home with a solid second place finish. The real battle was for third with four drivers battling to the end for that spot. Rick Wendling came away with the spot followed by Gary Tigges of Durango, Red Dralle of Evansdale and Schiltz. Those were the only cars on the track not lapped by Sanger.

Schiltz, who missed his heat race because his crew was making changes to the car, then won the consolation event and started 16th in the feature and made it up to sixth.

The 1981 race drew considerably less cars than the previous three years and may have been a factor in it being the last year of the race. Whatever the reason for its demise, the El Kahir Shrine race provided some great racing and more importantly raised money for a great cause.