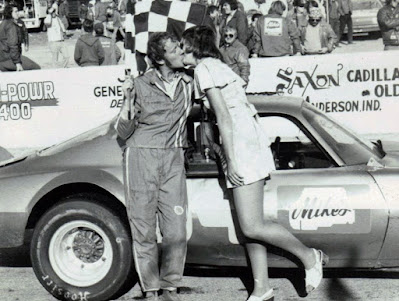 Bob Senneker receives a kiss in victory lane at Winchester.

He dominated action in the 24-car feature event, racing past really leader Jack Shanklin on lap 4 and steadily increasing the margin on the remainder of the field from that point.

Senneker’s only serious challenger all day long was Larry Moore of Dayton, Ohio, who also broke the old single lap world mark of 17.93 seconds (held jointly by Vernon Schrock and Ed VanderLaan) in qualifying with a 17.907 second lap. Moore kept Senneker in sight until he blew a right front tire on lap 67, necessitating a pit stop.

Mickey Flora, of Muncie, Ind., mounted a daring charge by starting deep in the pack and fighting his way to third position in a blue brand-new Ford Falcon out of Jody Ridley’s shop in Chatsworth, Ga. A broken distributor gear sidelined him at 36 laps.

Behind Senneker and Moore, however, was a scrap for position throughout the race involving Carl Smith, Harold Scott and Moose Myers. Smith finally took charge until the post race inspection revealed he was short of the required weight, resulting in a post-race disqualification.