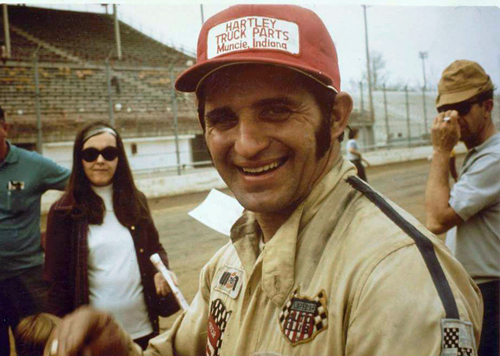 Ramo Stott was all smiles after winning at Sedalia

(April 29, 1973) – Drivers from , all driving Dodges, swept the first three spots on Sunday afternoon in the annual 100, won in a record time by Ramo Stott.


With some 6,000 fans looking on, Don White took third place, two laps behind the leaders.


The 100-miler was run without caution flags and provided Stott his second consecutive USAC victory. He won the 100-lap feature at on Saturday night.


Jack Bowsher of , led the first 57 laps before his Ford Torino blew a head gasket. Bowsher had earned the pole position by qualifying with a lap record of 38.17 seconds.


Al Unser of , completed only two laps in his Rudy Hoerr Ford before dropping out with a faulty oil pump. The two-time 500 winner finished 19th at .