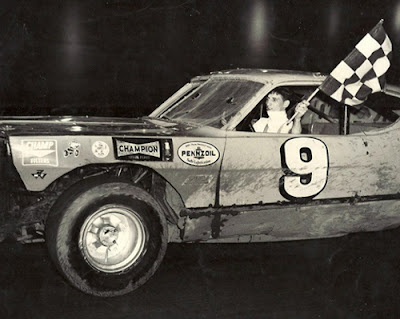 The youthful driver picked up not only the trophy for the feature win, but also took the "Race of Champions" - the event which pitted point champions from various tracks against each other.

A field of 52 entries crowded the Boone track making the final race of the season the biggest held this year.

Ramo Stott, the heralded point champion of the ARCA circuit from Keokuk, ran away from the field in the second heat, but couldn't stay with Hansen in the feature or the "Race of Champions."

In the feature Stott was set back by a spinout, but steadily gained ground to finish a fairly distant second.

Both Hansen and Denny Hovinga, Laurens ran ahead of Stott in the clash between the point champions.

Hansen was the season point leader at the Marshalltown track and Hovinga topped the field at the Boone Speedway and the Kossuth Speedway in Algona.

Running fourth in that event was a sportsman car chauffeured by Glenn Woodard, Des Moines, who was the point champion in his class at the Boone Speedway this season. Woodard was scheduled to start on the pole, but was late in coming out and had to start at the back.

Some of the point champions scheduled to run the special event were hindered by car trouble. Mike Chapman, the Alta point champion from Whiting, had his car give out and was going to run the Champions race with the car of Darreld Bunkofske, Algona, but that car also wasn't well, so he sat out the event.

Del McDowall, an Ames driver and point champion at the Stuart oval this year had his car on the sidelines and drove the car normally wheeled by Mike Keen, Marshalltown.

In the third heat, Arlo Dorenbush, Boone, got tangled up in the number two turn and his car was out for the night. To run the "Race of Champions”, he climbed behind the wheel of Wes Smith's Ford from Story City. Dorenbush finished fifth and McDowall was sixth in the race.

Stott went to a different rear end gear ration for the feature after spinning his wheels through most of the early events, but still didn't come up with a combination that could keep up with Hansen.

To make it a full night of winning, Hansen also captured the third heat, taking the lead with five laps to go.

Hovinga came within two hundredths of a second of the track record in the time trials as he flashed around the quarter-mile oval in 17.35 seconds.

That event saw 26 cars take the track, but one dropped out on the parade lap, leaving 25 to take the green flag. It took four restarts and 30 minutes to get the race completed.