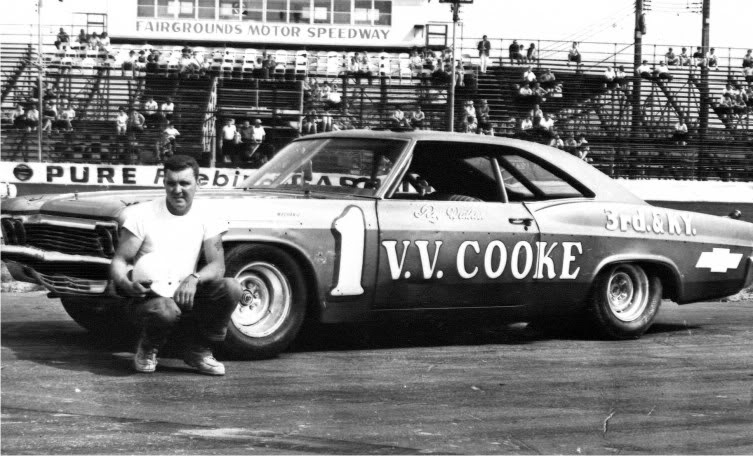 Roy Wathen, shown here at Fairgrounds Motor Speedway in Louisville Ky., won the inaugural Salem 500 with the help of Jerry Norris. - John Potts Photo
(October 20, 1968) – Roy Wathen of , didn’t have any idea he could do it, but he did.


Wathen, with some help from relief driver Jerry Norris, also of , won the $2,000 first prize in the initial running of the 500 for the Automobile Racing Club of America late model stock cars.


“I had no intentions of winning when I got here,” said a smiling Wathen after the 250-mile event on the high banks of the half-mile Salem Speedway. “But everything seemed to break right.”


When Norris got behind the wheel in relief of Wathen’s 1966 Chevrolet, there were about 150 laps to go and he was some 12 laps behind.


“It wasn’t that I was fatigued,” Wathen said. “But I had driven some 350 laps and my neck was sort of stiff and Jerry was there, so I let him take over.”


And through a series of misfortunes to the leaders, Norris wound up winning the race by a whopping seven laps over Clyde Parker of Farmington, Michigan.


First, Benny Parsons, the 1968 ARCA national champion, blew a tire, which ultimately knocked the oil pan off of his 1968 Ford and sent him to the sidelines on lap 419. Parsons was 5 laps ahead at the time.


Then Iggy Katona of , moved into the lead. But the six-time ARCA champion, who had a 6-lap lead, developed engine woes and had to make an unscheduled pit stop.


And when Katona’s car wouldn’t start, Bill Lemon of , in a sportsman-like gesture, gave him a friendly push in his ’68 Ford. By the time Katona got his car fired up, Cleo Ashley of , driving a ‘67 Mercury, had taken over the top spot on lap 439.


Katona, however, regained the lead on lap 468 and four laps later, Ashley tagged the fence on the north turn with a mighty wallop. “The car simply fell apart, Ashley said afterwards. “The gear shift came off in my hand, the clutch was out and my cotton-pickin crew kept signaling for me to come to the pits. Hell, I couldn’t have if I’d wanted to."


On lap 487, Katona’s engine up and died. Although the gallant Lemon tried twice more – for a total of 8 laps – to get him started, the effort was to no avail as Norris swept into first place and stayed there.


Les Snow of , the second fastest qualifier behind Parsons, led the first 180 laps before he and Parsons made scheduled pit stops. Jesse Baird of , inherited the lead briefly before pitting his ’66 Dodge and Snow regained the advantage on lap 216 when a blowout sent him back to the pits. The rear suspension failed on his ’67 a few laps later and he was finished for the day.


Baird, who was sidelined until lap 323 with clutch problems, actually spun on his first stop into the pits, accidently hitting a bystander and sending the poor fellow flying through the air. Somehow – the man wasn’t hurt – and that was as close to an injury all afternoon long.


Jim Robinson of , finished third; Katona amazingly got the engine fired up and back on the track to finished fourth; and Ashley, after “falling apart”, got his car pieced back together well enough to scrounge up a top five finish.


The race, which drew an estimated 7,500 fans, was the largest crowd in quite some time.