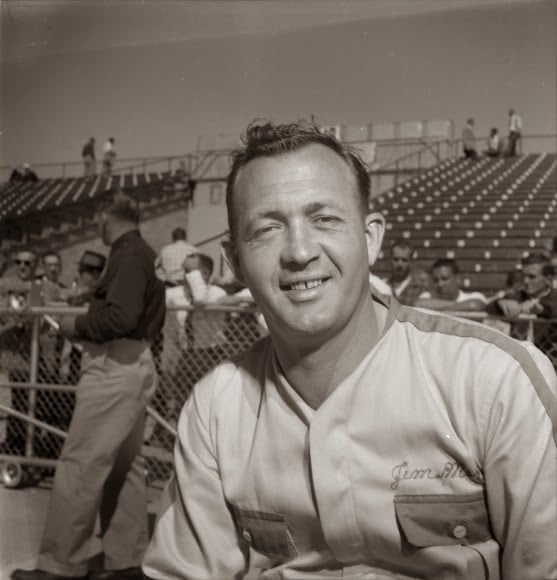 Jim McWithey
by Bob Speedy
Anderson, Ind. (March 13, 1971) - The city of Anderson, Indiana, can point with great pride the accomplishments of several area athletes that have participated in the professional ranks. Carl Erskine and Joe Campbell are probably recalled the quickest in the minds of our sports oriented citizens.

Jim McWithey, one of the better race drivers of the late fifties and early sixties, has also brought recognition to Anderson.

Born on July 4, 1927, this natural firecracker started his brilliant career in 1949 with the roaring roadsters of the Mutual Racing Association here in Anderson. He stayed with the MRA for three years where he ran in three “Little 500’s” finishing third in one, fifth in another and dropped out of the third race with some bent up equipment. 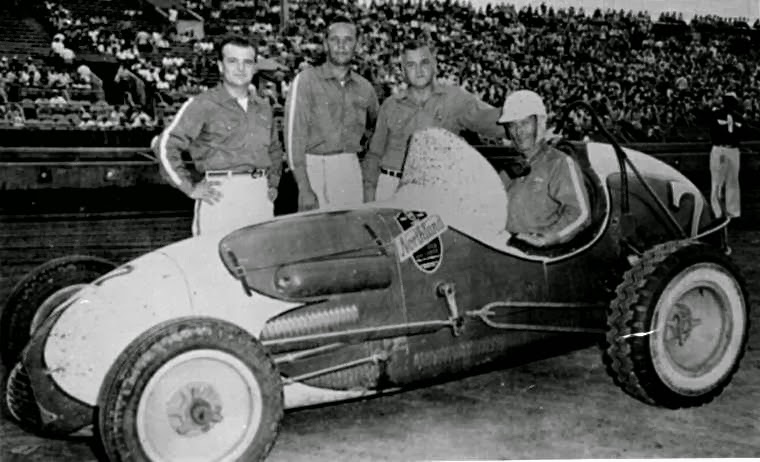 Jim McWithey - Don Radbruch Collection
McWithey then turned to the sprint cars as a driver for Diz Wilson on the Central States Racing Association circuit. After a successful year with this group Jim moved up to IMCA where he set several track records including tracks at Memphis, Tennessee, St. Paul, Minnesota and Des Moines, Iowa. After winning several features during his IMCA days Jim decided to turn to the USAC trail.

With the USAC sprint division he became one of the top competitors setting records at such tracks as Salem, Terre Haute, and Winchester in Indiana, and Reading and Williams Grove in Pennsylvania. Jim was almost unstoppable on the dirt at Langhorne.

One of Jim’s victories that stands out in this writer’s mind came at Terre Haute’s half mile dirt oval on August 16, 1959, when McWithey won the feature, beating out seven-time sprint car champion Tommy Hinnershitz. Ed Elision finished third in that event. A year earlier at the same track on June 22nd, Jim set a new track record of 24.03, a time that would be fast enough to get into any feature event today, won the first heat over Eddie Sachs and finished third in the feature behind Sachs and Hinnershitz.

During his USAC sprint car days he finished fifth in point standings in 1957 and third the next two years. Jim drove the Columbus Indiana Auto Supply car in ‘57 and wheeled the Bob Estes owned sprinter in ‘53 and ‘59. Chief mechanic for the Estes car was Jud Phillips who later turned the wrenches for Bobby Unser’s winning machine at the 1958 Indianapolis 100.

McWithey’s first championship ride came at Indianapolis in 1957. Because of the wet month that year, Jim did not get to practice enough in the Dayton Steel Foundry special so he did not qualify for the race. He came back to Indy in ‘58 and unfortunately crashed tie Federal Engineering car during qualifications. 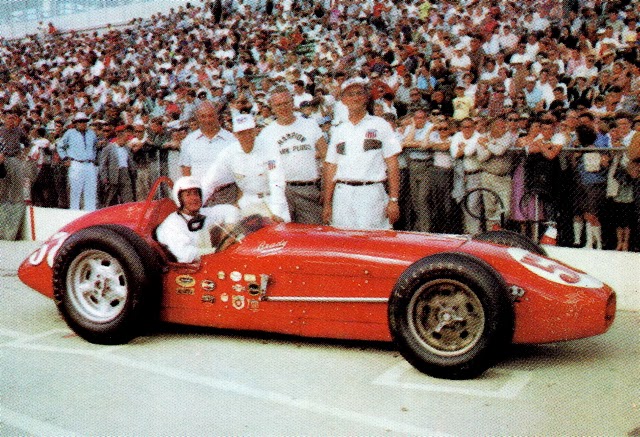 Bill McWithey at Indianapolis behind the wheel of Ray Brady's roadster
In 1959 he joined the Ray Brady team out of Norristown, Pennsylvania with Bill Cheesman his chief mechanic. Jim qualified the roadster in 33rd, or the “bubble” as some call it, and then impressed a lot of people with a fine 13th place finish. This gained him membership in the elite 100 mile per hour club of which there are only 63 living members.

Again in 1960 Jim started on the tail of the Indy line up and completed 66 laps before a broken brake line on the beautiful orange colored Hoover Motor Express Special forced him out of the event. He ran the Hoover car on the championship trail that year and finished the season 8th in point standings.

In 1961 Jim ran a limited number of championship events and finished the year 16th in the point chase. In the fall of ’61 a bothersome thyroid condition ended his driving career. He was never injured in a race car, with his most serious accident happening at DeGraff, Ohio, when he flipped a roadster while racing with the Mutual Racing Association.

With over a hundred career wins to his credit, Jim was truly one of the best to ever strap himself into a race car.

“Of all of the drivers I ran against,” recalls Jim, “I believe A. J. Foyt was the best. Don Branson was perhaps me best sprint driver with Tommy Hinnershitz being right up there with to be best. Of today’s drivers on the sprint trail, Larry Dickson is about the best around. He proved that when he broke Branson’s record for feature wins.”

Asked to compare the drivers of his days with today’s sprint chauffeurs, Jim claims, “The drivers I ran against would all do good in today’s races. The equipment we used was much heavier and harder to handle than today’s cars. I really don’t believe the speeds on the sprint trail have increased all that much, although the cars today are much later.

His most exciting moment in auto racing?

“Qualifying for the Indy 500 is about a big a thrill a race driver can have. Being able to finish the race and gaining membership in the 100 mile per hour club is something that doesn’t happen to every one, so this was just as exciting.”