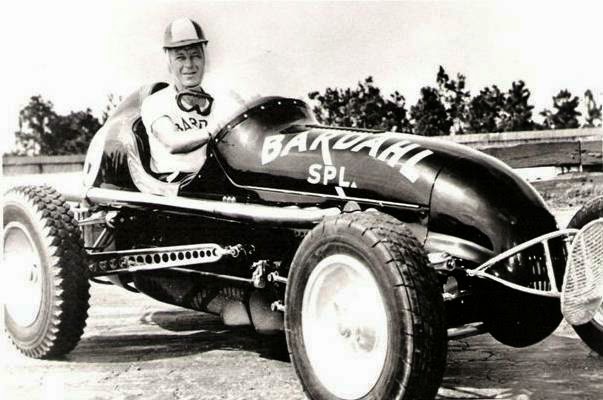 Frank Luptow in the Bardahl Special - Don Radbruch Collection
by Lee Ackerman
Omaha, Neb. - On July 1, 1951, the IMCA Big Cars invaded the Belleville High Banks for what would be the first of a decade long series of races at the famed facility. In some years during that decade the series would race the legendary high banks as many as four times.

The crowd of nearly 7,000 fans on July 1 would certainly get their monies worth as three IMCA World records would not only be broken but shattered. A fourth record would certainly have fallen if not for a serious incident in the east corner.


Frank Luptow of Tampa, Florida, the two-time and defending IMCA champion (who would run away with the 1951 title) quickly got things started in time trials when he drove his famous #9 Offenhauser around the half-time high banks turning a lap of 20.14 which broke the then existing IMCA half-mile record by an astonishing 3.4 seconds.


Luptow would then follow this up by winning the first heat and breaking the IMCA record for 7 laps (3.5 miles) by over 9 seconds. The new record did not stand for long however as Bobby Grim of Indianapolis, Indiana wheeled the soon to be legendary Hector Honore #2 around the 7 laps of heat two in an incredible time of 2 minutes 34.5 seconds shattering Luptow’s time by 14 seconds. Things were a bit slower when Art Dischinger of won the third heat in a time that was 18 seconds slower than Grim’s new record.


After Fritz Tegtmeier won the 3-lap invitational handicap, ’ Jack Ryan set a new IMCA record for 8 laps in winning the semi-feature in 3 minutes 14.40 seconds, 8 seconds faster than the existing record for that distance.


A new track record would most likely have been set in the 20-lap feature had it not been for a fourth lap incident where Russ Beighley of Lincoln, Nebraska got into the east fence and took out a 40 foot section. Beighley was taken to the local hospital but was later released. Luptow would win the feature event with Grim second and Herschel Wagner finishing third.


On August 28 Luptow and the IMCA Big Car drivers returned to for the North Central Kansas Free Fair Races and Luptow and his famed #9 left with another IMCA record. In the 20-lap feature Luptow shattered the IMCA record that distance by over 18 seconds. Luptow would outdistance Bobby Grim and Bill Holland of to win the feature event. Grim would set fast time but nearly a half second off Luptow’s 20.14 while Luptow, Grim and ’s Gordon Shuck won heats.


Two days later the fans were back at expecting a great three-way battle between Luptow, Grim and . Unfortunately, that did not happen. First, Luptow burned out a wheel bearing and did not race in the feature and then after battling for 12 laps in the feature, Grim blew a tire and (the 1949 500 winner) drove away to the win. 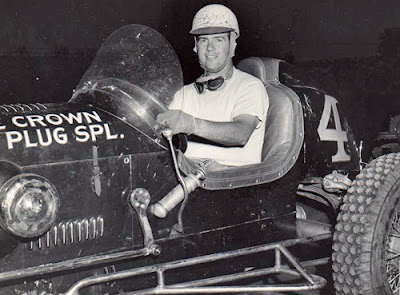 The Big Cars returned to on May 30, 1952, on what was to become an annual Memorial Day tradition at the High Banks. An estimated 5,000 fans turned out for the event. Many of the same drivers from the year before were on hand once again including Bill Holland. Holland returned behind the wheel of the Blue Crown Special and would not only win the feature for the second straight time at Belleville but also lower the 20-lap IMCA record by 8 seconds turning the distance in 7 minutes 14.26 seconds.


did not win without stiff competition, however. First it was ’s Jimmy Campbell who put up a fierce battle for 12 laps before dropping out of the race with falling oil pressure. After Campbell’s demise, Kansas City’s Bob Slater behind the wheel of the #42 Heath Offy moved up to battle Holland, pulling his cream and maroon ride up beside Holland several times but failing each time to make the pass.


Slater would end up settling for second in the feature with ’ Charley Irons in third. Earlier in the day, , Slater and Irons had captured heat race wins. Mac McHenry of Wichita took the match race aboard the Les King Offy and ’s Lowell Blume won the semi. One driver who had a disappointing afternoon was Bobby Grim who broke a crankshaft in the Honore Offy during hot laps and was forced to set out the days’ action.


A Big Car race scheduled for the High Banks on June 26 was apparently rained out.


On August 26 the Big Cars returned to for two days of racing during the Fair and Bill Holland made it three in a row taking the Blue Crown Special to victory lane once again. would win the 20-lap event in 7 minutes 45.53 seconds with Bobby Grim finishing second and Herschel Wagner third. Earlier in the day Grim had set fast time with a close second. Heats went to Don Branson of , , and Phil Mocca of .


Two days later the Big Cars returned for their second fair date and finally somebody put a stop to the Bill Holland win streak. Jimmy Campbell brought his Offy home in first place before another standing room crowd. As could be expected right on ’s heels were Bill Holland and Bobby Grim who finished second and third in a feature that it was later determined was given the checkered flag one lap earlier eliminating any chance of a new record.


Earlier in the day Jimmy Wegescheider had won the first heat and the match race with the other heats going to Don Branson and Gordon Shuck. The semi feature was won by Phil Mocca.


During the first two years of IMCA Big Car racing at the Belleville High Banks, action had pretty much been dominated by Frank Luptow and then Bill Holland. But looming on the horizon was a crafty old mechanic, two drivers and a Black Offenhauser that was about to race themselves into racing history. From 1953 through the last IMCA Big Car race at in 1963 one word could be used to describe their performance. DOMINATION!