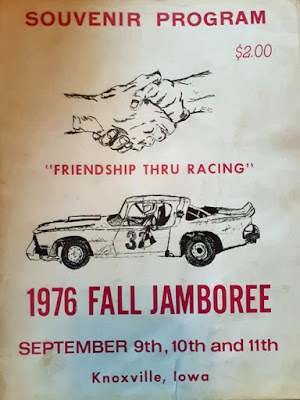 by Lee Ackerman
Knoxville, Iowa - One of the biggest Dirt Late Model races of the year is the annual Knoxville Late Nationals at the historical Knoxville Raceway. The current Late Model Nationals is not the first time that Knoxville has had a big fall race for Late Models. Back in the 1970’s promoter Gail Miller held a fall Late Model race at the famed half-mile track on the Marion County Fairgrounds. The event was called the Knoxville Fall Jamboree.

The first Knoxville Fall Jamboree held on Saturday, September 13, 1975 had a bizarre ending. First of all the show was running behind schedule so Promoter Gail Miller cut the feature from its scheduled 50 laps to 30 laps because of a 12:30 am curfew. Curt Hansen of Dike took the initial lead in the feature. Darrell Dake of Cedar Rapids took the lead on the 23rd lap and then it happened, a big accident that included race leader Dake. Darrell Dake’s car was totally demolished. The race was called and Dake was declared the winner and he pocketed $2,000. 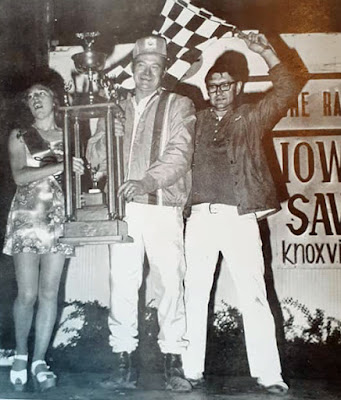 
Curt Hansen was awarded second, Ed Sanger of Waterloo third, Kent Tucker of Aurora, Nebraska fourth and Fred Horn of Marion fifth. On lap 2 Don Hoffman of Des Moines went through the fence in turn 3 and took out the light pole. Earlier Hoffman had set a new track record for Late Models in qualifying at 23.566 seconds. Hoffman then won the trophy dash with Sanger second and Verlin Eaker of Mechanicsville third.

“I remember thinking Dake got in the third turn wall and they had a 10:30 curfew and its like 10:15 I got this thing won “remembers Curt Hansen, “ They had the wrecker hooked up to the front of Darrell then the back and then they brought out another wrecker and I guess time ran out.”

Heat wins went to Galen Schaefer of Topeka, Kansas, John Connolly of Eldridge, Iowa, Ron Prymek of Des Moines and Joe Wallace of Peyton, Colorado. The consolation event went to Don Styskal of Fremont, Nebraska. In the B feature it was Dan Dickey of Packwood defeating Roger Dolan of Lisbon and Bill Zwanziger of Waterloo.

The two-day affair also included Sportsman and they had their problems as well. First on lap 12 of the feature a big 15 car melee resulted in the flag stand pole being split in to. Then on lap 14 cars out of the 36 car starting field took out two light poles on the backstretch. At this point the Sportsman feature was called complete and Dan Beaver of Tracy, Iowa, who had taken the lead from Rocky Hodges of Des Moines, was declared the winner.

The incident on the backstretch that took out the light poles created an emergency situation as far as lighting was concerned and the solution was to use the headlights of numerous automobiles to provide lighting on the backstretch. If these incidents weren’t weird enough, a person was transported to the hospital after he accidently set himself on fire trying to start a fire with some firewood to keep himself warm. Legend has it that one driver even borrowed a chainsaw to cut up wood to keep warm. 278 cars signed into the initial running of the Fall Jamboree which will always be remembered for all the strange things that went on. 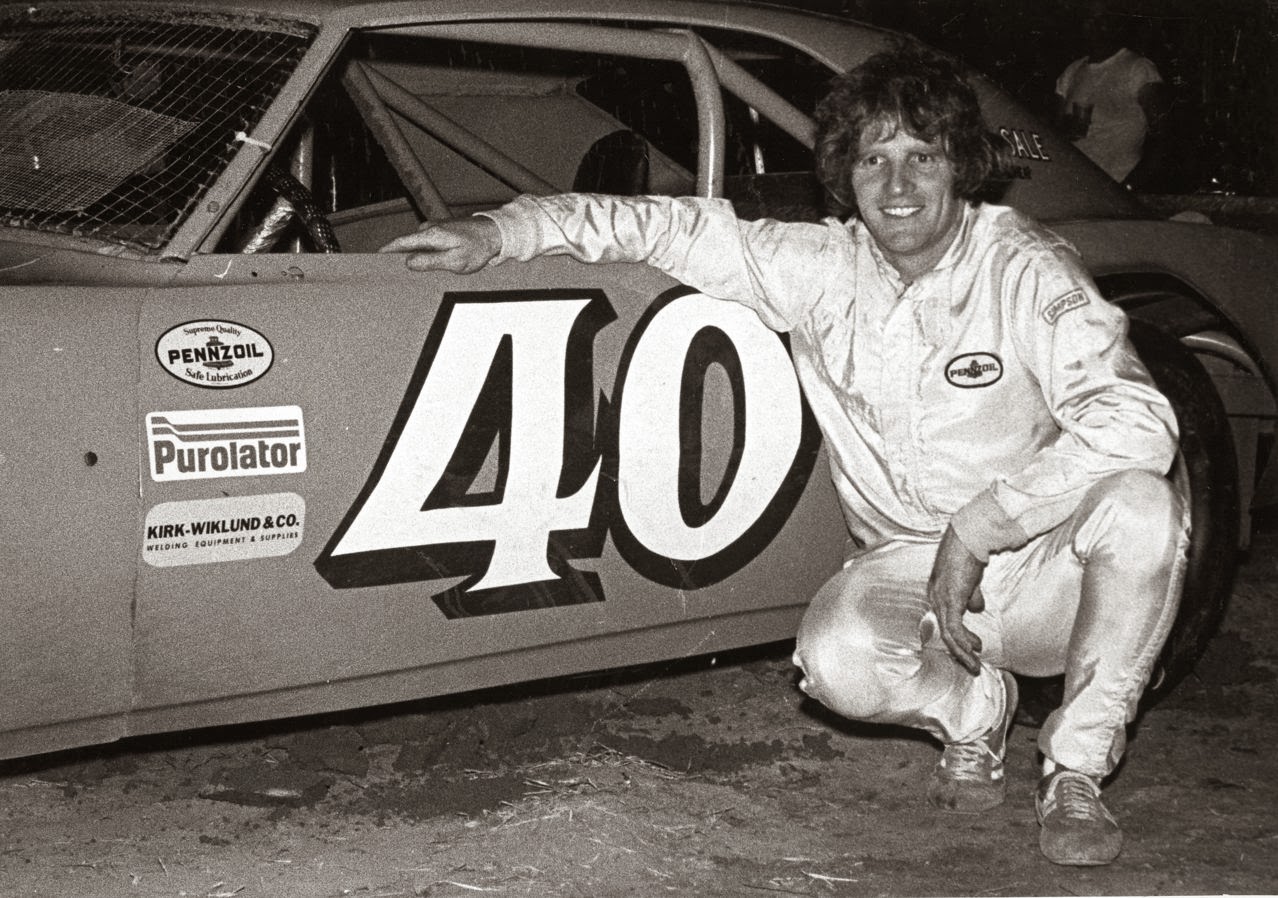 
In 1976 Joe Wallace now racing out of Kansas City, Missouri returned to the Fall Jamboree and made up for his disappointing showing of the year before. When the smoke cleared Wallace was in victory lane with a big check for $4,000. Wallace led the entire 50 laps of the September 11 event. Steve Keppler of Marion held second throughout the event and took home $2,000 for his efforts. Don Hoffman of Des Moines started deep in the field and finished third. Joe Merryfield of Des Moines was fourth and fast qualifier Dave Srock finished fifth.

Jerry Wancewicz of Omaha, Nebraska won the B feature with Bill Martin of Council Bluffs second and John Oswaldt of Kansas City third.

The accompanying Sportsman feature saw Gary Crawford of Independence, Iowa take the lead on lap six and lead the remainder of the way. Denny Osborn of Cedar Falls was second, Herb Shannon of Peoria, Illinois third, Rocky Hodges of Des Moines fourth and the legendary Ernie Derr of Keokuk fifth.

On Thursday, September 9, Dave Srock of Pennsylvania had set fast time. Joe Merryfield won the dash over Dave Chase and Bill Zwanziger. Heats were won by Ken Walton of Viola over Kent Tucker, Verlin Eaker over John Connolly and Doug Kenimer of Dahlonega, Georgia over Bill Rice of Des Moines.

On Friday night Don Hoffman had ran a flawless heat race defeating Galen Schafer by about quarter of a lap. Fred Knapp of Des Moines won the second heat and Curt Hansen of Dike the third heat. 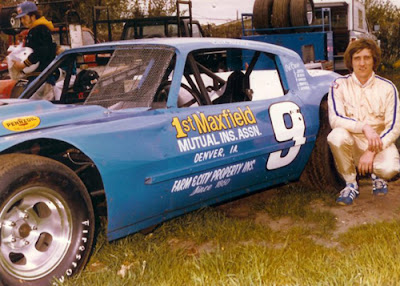 Curt Hansen was the Fall Jamboree champion in 1977.


1977 would be the third and last of the Fall Jamborees and it was only fitting that the richest stock car race in Iowa was won by the state’s most successful driver that year. Curt Hansen of Dike would win the third Fall Jamboree. Hansen had to battle early on in the 50 lap feature with Joe Merryfield of Des Moines. Merryfield would however be taken from contention with a flat tire. Hansen would then build a comfortable lead but with 19 laps remaining a caution bunched everybody up.

On the restart Hansen had to battle a hard charging Fred Horn of Marion and Horn would give Hansen all he wanted. Several times Horn was beside Hansen only to see Hansen edge him by several car lengths at the checkers. Hansen had qualified second for the event and he would leave Knoxville with over $4,000. Following Hansen and Horn were Don Hoffman of Des Moines, Terry Bivins of Shawnee Mission, Kansas, Tom Steuding of Altoona, Wisconsin, Ron Jackson of Burlington, Don Styskal of Fremont and the defending race winner Joe Wallace of Kansas City.

Waterloo’s Dick Schiltz won the 35-lap Sportsman feature and took home the first place money of $2,000. Schilitz and Denny Osborn of Cedar Falls battled for the lead throughout much of the race before Osborn crashed into the second turn wall with just four laps remaining. Keokuk’s Lem Blankenship finished second and Rocky Hodges of Des Moines third.

In 2004 the Late Models would one again return to the storied half-mile in Knoxville for a fall classic, the Knoxville Late Model Nationals. That event has quickly became one of the annual Crown Jewels of Dirt Late Model racing and has provided dirt late model fans with many great moments, perhaps none more exciting than in 2008 when Darrell Lanigan passed Jimmy Owens for the win as they raced to the checkers on Friday night and then Tim McCredie duplicated that feat the following night passing Josh Richards for the win just before the flag stand.

Knoxville may be sprint car territory but over years the late models have shown they can put on a great show at the famed half-mile as well.