NSCA promoted sprint car races and later late model races throughout the from 1978 thru 1984. In 1985 the NSCA Sprint Car series became the regional arm of the World of Outlaws. One of the concepts of the NSCA was to have an eight member board of directors for each division. These boards were made up of four drivers and four car owners. These groups established the rules for racing within each division.


The series scheduled several races in the later part of June 1983 and those are the focus of this story simply because this writer was able to attend the last two of these. The race scheduled for June 26 in was rained out. 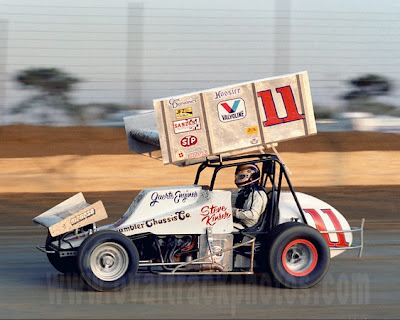 
Things started off with the Annual Casey’s General Stores Missouri Sprint Car Nationals at the Missouri State Fairgrounds in . The King of the Outlaws Steve Kinser would set fast time of 19.883 seconds aboard the C.K. Spurlock Gambler House Car normally driven by Doug Wolfgang.


Saturday night ended up being a very interesting night. First off, Bob Lawton was hit by a sprint car during the packing of the track sending him to the local hospital with a broken leg. Then rain delayed the start of the show till 10 pm. In heat race action it was Randy Smith, Bobby Layne, David Dwyer and Ricky Hood picking up wins. Gates would claim the B feature over Sonny Smyser.


The 25-lap feature once again saw “the King” Steve Kinser come out on top of a race that saw Layne take a wild flip that brought out the red. At the end of the event it was Kinser besting Wolfgang, Hood, Smith and Sernett.


The next night the action moved to Lakeside Speedway in and a race that yours truly fondly remembers because it took only 1 hour and 50 minutes to run the program from start to finish. Thirty cars were on hand for the event that saw John Sernett set fast time at 19.389 seconds 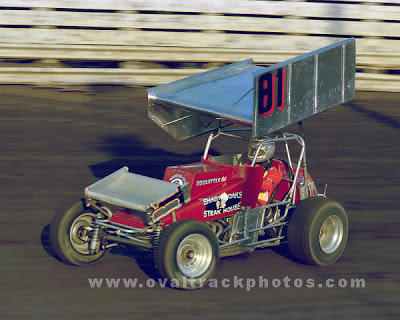 
The A feature would see a local driver hold off the big names to take home the $2,000 first prize. ’s T. J. Giddings driving the #81 Marty Johnson/Shady Oaks Steakhouse car would start on the pole and hold both Steve Kinser in the Gambler House car and Doug Wolfgang in the Nance Speed Shop House car for the win. Finishing behind Giddings, Kinser and Wolfgang were Ricky Hood and fast qualifier John Sernett.


The following Friday night before a near capacity crowd the NSCA Sprinters would test out the 1/3-mile high banks of  Eagle Raceway just east of Lincoln, Nebraska. Just 18 Sprinters showed up for the event which saw Randy Smith of   driving the #55 Jensen Construction Sprinter set fast time at 14.057 seconds with Jr. Parkinson and Bob Thoman second and third in time trials.


Bob Thoman driving the #87 car would win the dash over Rocky Hodges in the Casey’s General Store #47. Joe Wade driving the #12 sprinter would use the pole position to good advantage in taking the first heat. Woody Woodard would take the second heat from his fourth starting position and Jr. Parkinson was never headed in winning the third heat from the pole.


Sixteen cars would take the green flag in the A feature with Dan Shorney and late arriving T. J. Giddings scratching. Woody Woodward would take command of the feature from his outside front row starting position and would hold off the challenges of Bob Thoman for the first half of the race and appeared to have things well in hand until a lap 20 red flag thrown for a turn one altercations between Hodges, Parkinson and Gene Brudigan.


On the restart Woodward again seemed to have things in hand when he experienced mechanical problems on the next to last lap and Randy Smith inherited the lead and took the win. Seventh starting Mike Pinkney would finish second followed by Thoman, and Brett Lacey who started in the final row.


Randy Smith would go on to win the 1983 NSCA Sprint Car Championship, but the series was in its final stages and would fade from the scene after running as the World of Outlaw Regional Series in 1985. During its day however, the NSCA provided Midwest race fans with some great racing action.