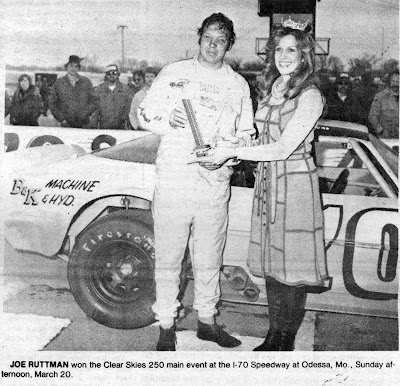 (March 20, 1977) – Joe Ruttman of , led from start to finish in the 100-lap main at I-70 Speedway on Sunday, March 20 to take the top prize in the first annual “Clear Skies 250”, which served as the track’s season opening event as well as the first race on the American Speed Association’s Circuit of Champions late model series.


Ruttman also won one of the 75-lap qualifying events, which helped give the event a total of 250 laps. He took home $2,275 for the afternoon of work.


In the first 75-lapper, Ruttman jumped from the outside pole into the lead but was over hauled by polesitter Tom Reffner on the second round.


Reffner, of , had earned the pole with a 17.74 second clocking around the high-banked half-mile, identical to that of Tom Maier of Maier earned the pole position for the second 75-lap segment.


Reffner led the first 37 laps until his Hornet experienced handling problems, which the pit crew traced to tire compounds, and he retired from the race after six more laps.


On the same lap, Larry Phillips of , took over the lead in his Camaro, but held on for only two laps before Ruttman pushed his own Camaro to the front, this time for good. Phillips would also develop problems and would fall out of the running.


Ruttman raced on to a comfortable win in the preliminary, with Don Gregory of , placing second and Ed Hoffman of , taking fourth. Both drove Camaros.


In the second 75-lap qualifier, Maier took the lead at the drop of the green but problems with soft tire compound forced him to slow his pace after only 14 laps. Mike Eddy of , would then inherit the top spot.


Eddy would go on to win handily, beating Maier to the checkered flag by seven seconds. Despite tire problems, Maier was able to hold off Dick Trickle of , who finished third driving a Mustang.


Although Ruttman led every lap of the 100-lap main event and won by almost half a lap, he had far from an easy time of it.


For two-thirds of the race, it was hard-charging Mike Eddy that kept the 3,000 plus fans on the edge of their seats as he tried inside and then outside in repeated attempts to get around Ruttman.


On lap 64, however, Eddy slowed visibly as the two front runners raced down the front stretch and on the next lap he was in the pits with a blown engine.

As the twosome had been nearly half a lap ahead of the rest of the field, Ruttman was left with a sizeable margin. Ed Hoffman took over second spot until he retired with engine failure on lap 84.


Don Gregory took over Hoffman’s position but was too far back to mount any sort of challenge to Ruttman. Trickle would finish third, nearly half a lap behind the winner and the last car on the lead lap.


Junior Hanley of Burlington, Ontario, Canada, took fourth, a lap back, and Dave Watson of , finished fifth, being credited with 98 laps.