1958 - Bettenhausen: No Limit on Indianapolis Speed 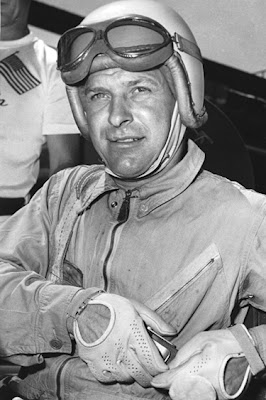 Cedar Rapids, Iowa (November 23, 1958) - Tony Bettenhausen, described recently as an “aging tiger” in the treacherous business of racing autos, doesn’t agree with the experts who think the famed Indianapolis track has reached its limit for producing speed.

“There is no limit to speed at Indianapolis,” says Tony, a vigorous 44-year-old who last month won his second national driving championship.

“It's simply a case of engineering,” he explains. “Besides developing more speed, the construction of the cars must constantly change so the speed can be used.”

Bettenhausen, a two-time national driving champ and a 12-time contender at Indianapolis, was in Cedar Rapids on Thursday and Friday to speak on highway safety, as part of a nationwide program sponsored by the Champion Spark Plug Company.

Bettenhausen is a member of the famed Champion 100 Mile-an-Hour Club, has driven more miles on the Indianapolis Speedway than any other active driver, and travels from 35,000 to 40,000 miles a year on the nation’s highways.

“Highway safety is the same as race track safety,” Tony tells student groups. “The key points are the condition of your car, mental alertness and courtesy.”

Tony is one of the best known and best liked of the nation’s top drivers, and he has come a long way since, his early days of racing when: he was tabbed as “cement head”.

“It's a funny thing,” he explains. “I won my first national title in 1951 when I won 8 of 11 championship races. I won the title for the second time this year and didn’t win a race. But I finished second 4 times and was among the top 5 in all but one race.”

Despite the age of 44, Bettenhausen is going back to Indianapolis next spring. The farm boy from Tinley Park, Ill., has never won a “500” mile title, although he finished second in 1955 and fourth a year ago.

“I'll be driving the same car next year,” Tony explains, “but it will be for a new owner. Also, it has been completely changed. The motor will be on its side next spring. A lot of the cars will change the position of the motor.”

Bettenhausen is a farmer when he isn’t driving. He was born on a farm near Tinley Park, and he and his family still live in the same farm home.

The farm was largely responsible for Bettenhausen becoming a driver 23 years ago.

“I just got tired of horses and the old, hard way of doing things. I bought a race car when I was 20 and started driving when I was 21."