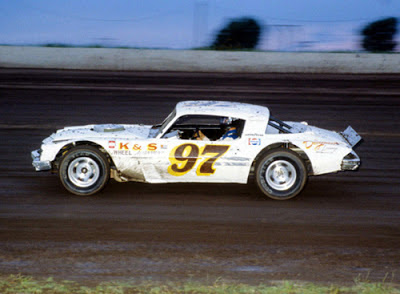 Dick Schiltz at the North Dakota State Fair in Minot - 1979.


by Lee Ackerman
Minot, N.D. - In the late 70’s and early 80’s Iowa drivers were dominating in the world of dirt late model racing. Iowa drivers won four World 100 titles in six years in the 70’s. What does that have to do with North Dakota? Well for three years starting in 1978 they ran a series of racing during the North Dakota State Fair in Minot and drivers from the Hawkeye state seemed to do pretty well.

On July 22 & 23, 1978 they ran the first of the races billed as the North Dakota State Fair Championship Races at the State Fairgrounds in Minot. Heats were won by Don Bender of Regan, North Dakota, Jack McDonald of Eldridge, North Dakota and Howard Nelson of Carrington, North Dakota. Des Moines, Iowa’s Joe Merryfield won the Trophy Dash and Bob Moody of Williston, North Dakota won the consolation.

When it came to “A” feature time, it was Joe Merryfield making a pass on the last lap to nail down the win. Don Bender was second, Howard Nelson third. Larry Seckerson of Jamestown, North Dakota was fourth and Dan Herman of Bismarck, North Dakota fifth.

Night two of the races saw Roy Miller of Minot, Don Bender and Bob Simmers of Jamestown pick up heat wins. Jack McDonald would win the dash and Bob Moody once again won the dash. In the feature it was all Joe Merryfield as he drove his Sanger Camaro to a half lap win after taking the lead on lap 26 of the 50 lap feature. John Gaule of Minot was second, Larry Seckerson third, Paul Schulz of Washburn fourth and Howard Nelson fifth.

Merryfield would earn $2,000 for winning the first North Dakota State Fair Late Model Championships and the 1975 World 100 champion would take the trophy back to Iowa.

Joe Merryfield must have passed the word about Minot when he got back to Iowa because the 1979 version of the North Dakota State Championships saw several Iowa drivers plus drivers from Nebraska, Wisconsin, Minnesota and Canada.

While North Dakota drivers dominated the heat races in 1978 that was not the case in 1979. On Thursday July 19, round one of a three night series, heats were won by Jim Bruggeman of White Bear Lake, Minnesota, Verlin Eaker of Mechanicsville, Iowa, Tom Corcoran of Grand Forks, North Dakota and Clayton Petersen, Jr., of Grand Island, Nebraska. The two consolation races went to Pete Parker of Kaukauna, Wisconsin and Don Hoffman of Des Moines, Iowa.

By winning the second consolation race, Don Hoffman and his Pizza Hut #2 got the privilege of starting ninth row outside. Hoffman would survive two caution flags and two red flags but he took the lead on lap 37 when race leader Leon Plan of Mondovi, Wisconsin slowed with mechanical problems. Hoffman had to survive a tangle with Bruggeman which sent Hoffman off turn two with a cut tire. He was however allowed to change the tire under the red flag and go on to win the feature and $2,000.

Clayton Petersen, Jr., would finish second, Thunder Bay, Ontario’s Tom Nesbitt third, Bruggeman would hold on for fourth and Steve Egersdorf of St. Paul, Minnesota would round out the top five.

Sunday’s finale was highlighted by an amazing pass on lap 45 by Gary Crawford as he passed Ed Sanger coming out of turn four. Crawford would go on to win the 50-lap feature and also the North Dakota State Championship. Sanger would finish second in the race and tie Don Hoffman for second in points. Hoffman would run third in the feature followed by Eaker in fourth giving Hawkeye drivers the top four spots. Bob Moody of Williston, North Dakota would finish fifth and give home state fans something to cheer about. Gary Crawford would win $5,000 for his efforts.

The 1980 version of the race became the North Dakota State Fair International Late Model Dirt Track Championship. Races were scheduled at Minot on July 19, 20 & 24 with a race also scheduled for July 22 at Winnipeg, Manitoba Speedway.

Things kicked off Saturday, July 19 and this time North Dakota drivers were ready to take back their territory. Marlyn Seidler of Underwood, North Dakota started on the pole and lead all the way in the 50-lap feature to take home his 13th win of the season. Jack McDonald was second with Huron, South Dakota’s Dennis Selting third, Fargo, North Dakota’s Mitch Johnson fourth and Bob Shryock of Estherville, Iowa fifth.

On Sunday night, Paul Schulz of Washburn, North Dakota grabbed the lead at the start but on lap eight Dennis Selting driving a 1980 Ford Thunderbird powered by a small-block Chevrolet took over the lead of the race. Selting held off Iowa hot shoe Dick Schiltz by a car length for the win. “The lapped cars made thing real tough tonight,” said Schiltz after the race. Schiltz would finish second, Em Fretheim third, Paul Schulz fourth and Ed Sanger fifth.

On Tuesday it was north of the border and a controversial ending. Over 7,000 fans were on hand for round three of the series and it would come down to a pair of Hawkeye state drivers. Dick Schiltz would take the lead from fellow Waterloo, Iowa resident Ed Sanger on lap 45 and go on to win the feature by about five car lengths. Following Schiltz and Sanger to the line were, Jim Bruggeman and Mitch Johnson.

After the race there were a number of questions raised about Schiltz’s car as well as other cars. Sanger claimed Schiltz had removed 500 pounds from his car before the race. Unfortunately, the track did not have a scale to weigh cars and insure they met the 3,000 pound minimum weight. They would be weighed once back in Minot.

The weight issue followed the cars back to Minot for the finale.

After the final checkered flew at Minot, veteran Ed Sanger was a happy man and grinning from ear to ear. During the feature race Sanger had been leading when Dick Schiltz passed him on lap 38 as they came by lapped traffic. Schiltz went on to take the checkered flag and most spectators left thinking Schiltz had won the race. However, Nodak Racing Club Officials required the top 10 cars to be weighed. Schiltz was found to way only 2,845 pounds, 155 pounds light. He was disqualified and the victory given to second place Sanger.

“He knew he had to be light to win tonight,” Sanger commented, “They didn’t weigh the cars last year on the final night and I don’t think Dick thought they would tonight.”

Meanwhile Schiltz contended, “I know that the scales have been changed,” argued a bitter Schiltz, “We set the car up on the same scale and it weighed over 3,100 pounds.”

Following Sanger in the official finish of the race were Red Dralle of Waterloo, Iowa, Steve Egersdorf, Maryln Seidler and Em Freitheim.

Sanger would not only pick up the win but also capture the title for the North Dakota State Fair Championship. He would end up with $4,850 prize money for the four nights. Bob Shryock would finish second in the series and Red Dralle third. A total of 45 cars took place in the four day series. They represented seven states and two Canadian provinces

For three years the North Dakota State Championship races had brought some great racing to the Dakotas. It had gone from largely a state race in the first year to a regional affair the last two years. But as they had in some many areas of the country, Iowa drivers would dominate the event.