The Big Cars at the Wapello County Fair

by Lee Ackerman
Eldon, Iowa - Growing up on a farm in Central Nebraska, the highlight of the year was going to the Nebraska State Fair and that meant the Big Cars of International Motor Contest Association (IMCA). This was back in the mid-50’s when IMCA was king and you better get your ticket for the races early because the huge grandstand would sell out. Every year I would buy an IMCA yearbook and memorize them. I knew about every track that the Big Cars raced at and one of those tracks that I remember was the Wapello County Fair in Eldon, Iowa.

Doing a little research in Alan Brown’s fabulous book “The History of American Speedways, Past and Present” I find that racing occurred at the Fairgrounds in Eldon from 1934 through August 21, 1941. Since all IMCA record prior to World War II have unfortunately been lost to history, we will start our story with the first IMCA Big Car race at Eldon after World War II, that being on August 22, 1946. 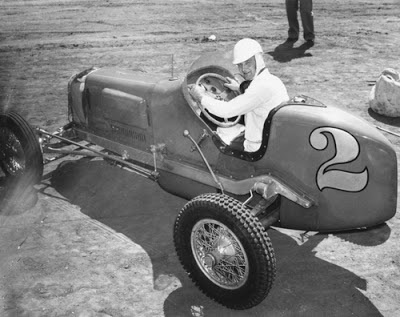 
While results for many years after the war are hard to find I do know that the winner of that August 22 race was Kent, Ohio’s Deb Snyder driving the Dunlap Offy #2. Snyder would be crowned the IMCA Big Car Champion in both 1952 & 1953. Snyder would retire following the 1954 racing season a holder of 87 track records.

On August 21, 1947, it would be Emory Collins of LeMars, Iowa driving his own famed #7 Offy picking up the win at Eldon. In 1947 Collins was in the middle of a three year reign as IMCA Champion winning the title in 1938, 1946, 1947 and 1948. Collins would return to victory lane at Eldon on August 25, 1949. Like Snyder, Collins would survive the fate of so many of his fellow competitors killed in action and retire in 1951 to live out his life back in LeMars. 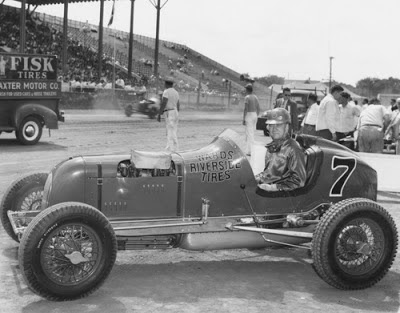 In 1948, it was yet another IMCA champion going to victory lane at Eldon when Frank Luptow of Tampa, Florida wheeled the #3 Lovitti Offy to a win. Luptow would rule the IMCA Big Car scene from 1949 through 1951. Luptow would return to victory lane at Eldon on August 24, 1950. Unfortunately for Luptow, he did not survive the sport being fatally injured in a NASCAR race at the Lakewood Speedway in Atlanta, Georgia on September 21, 1952.

Bill Holland of Chicago, Illinois winner of the 1951 Eldon Big Car Race did not win an IMCA national championship but he did win the biggest race of them all, the 1949 Indianapolis 500. Holland would make it through his racing career, retiring and living until 1984.

Jimmy Campbell of Bates City, Missouri won the 1952 race in his own #25 Offy and would finish second to Snyder in IMCA points. In 1953, Dick Ferguson of Chicago, Illinois drove Les King’s # K2 Offenhauser to the win at Eldon. 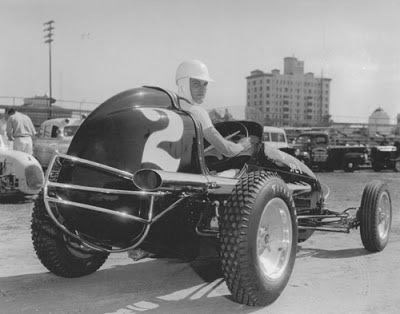 
That brings us to 1954 and into the picture steps a physically small sized mechanic-car owner from Pekin, Illinois named Hector Honore. Honore may have been small in stature but he carried a whale of wrench because for the next nine years his legendary #2 Black Deuce would grace victory lane at Eldon. For five years (1954-58) Bobby Grim of Indianapolis would drive the legendary Bardahl Special to victory lane.

After Grim departed for Indy Cars, Pete Folse of Tampa, Florida would win the annual Fair event at Eldon in 1959 thru 1962. Honore and his two drivers would win seven straight IMCA Big Car Champions, four with Grim (55-58) and then three with Folse (1959-61). When you think of IMCA Big Cars the first car that comes to mind is the Hector Honore Offenhauser. 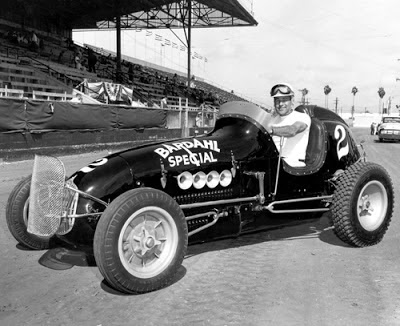 Pete Folse would continue with the Black Deuce's domination of the Wapello County Fair, winning there in 1959, '60, '61, and '62. - Bob Mays Collection


Finally on August 8, 1963, the original outlaw, Gordon Wooley of Waco, Texas drove the Calvin/Young #8 Chevy (Yes, I said Chevy) to victory lane at Eldon on his way to winning the IMCA national title. Ironically, Wooley won in three different mounts on his way to the championship.

Chevrolet would be the dominant power plant from that time forward, in 1964 it was Greg Weld winning in the Butler #40. Jerry Richert would drive the #63 Wagner Chevy home to victory lane in 1965, 1966 and again in 1970. In 1967 it was Springfield, Illinois’ Jim Moughan winning behind the wheel of the Merle Heath Chevy #42. 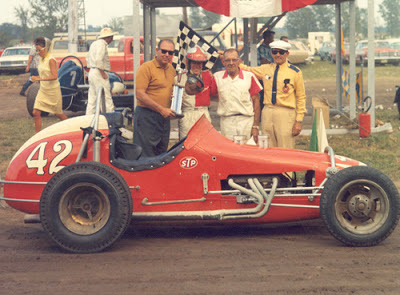 
In 1968 Norm Paul of Auburn, California decided to come to the Midwest and try his hand at the IMCA Fair Circuit and promptly put the Jerry Pittman #98 in victory lane at Eldon. In 1969, local fans got to cheer a local driver to victory lane when John Babb of Ottumwa took the win in Bob Trostle’s Corn Belt #19. 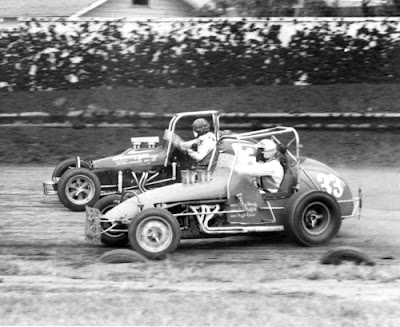 Jerry Blundy of Galesburg, Illinois behind the wheel of the Mel Moffitt #33 won the Eldon race in 1971 on his way to his second straight IMCA national crown. In 1972 IMCA added a second race at Eldon. This race would be over Memorial Day Weekend and Ray Lee Goodwin of Kansas City, Missouri drove the Gary Swenson #24 to victory lane in that race both in 1972 & 1973. At the annual Fair in race in 1972 the Corn Belt #19 was back in victory lane this time with Greenwood, Missouri’s Dick Sutcliffe behind the wheel. 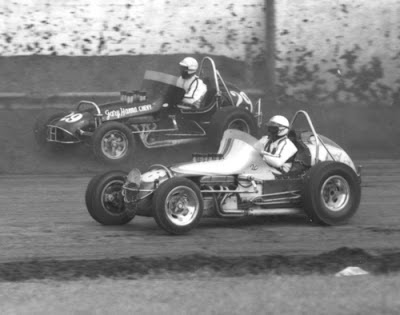 
1975 would see Des Moines driver Ralph Blackett win the May race in the Springer #28 and Jan Opperman of Noxom, Montana win the Wapello County Fair race in Speedy Bill Smith’s famed #4X. 1976 would be the last year of the IMCA at Eldon (The series folded following the 1977 season). Gary Scott of Holt Summit, Missouri took the May race in the Hassler#10X and Gene Gennetten of Parkville, Missouri would be the final name added to the list as he won the August race in his own #3. 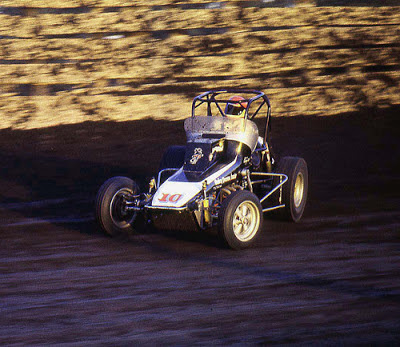 Gary Scott of Holts Summit, Mo., would be the final IMCA sprint car winner at the Wapello County Fairgrounds in 1976. - Bob Mays Collection


For 30 years after World War II the legendary cars and drivers of the IMCA Big Car Series visited the big half-mile facility at Eldon, Iowa providing local race fans with some of the best dirt track racing in the country.