by Kyle Ealy
Cedar Rapids, Iowa – It was a unique three-race event that covered three tracks in three states in three days. Some of the best late model drivers from a four-state area gathered to compete in the Triple Crown Dirt Track Championships in late fall of 1971.

The three tracks that would play host to these races; Tri-Oval Speedway in Fountain City, Wis., Farley (Iowa) Raceway and Freeport (Ill.) Raceway were all a little different in shape and length, so drivers would have to be on top of their game not only on the track but in the set-up of the car.

One driver summed it up best when describing the three tracks, “Tri-Oval is a demanding track, primarily because of its shape but also because it forces the driver to work. This is one track where driving skill probably is more important than the car. Farley requires a big powerful machine. The most horsepower usually wins there. Freeport requires a car that handles perfectly, because there’s usually only one groove.”

An eye-popping purse of $4,000 would be shelled out at each event including a $1,500 point fund bringing the total purse to over $13,000. Points would be earned at each race and whoever accumulated the most points over the three events would be crowned champion.

The format to the race was unique. The top five point drivers at each track would be guaranteed a spot in the 30-car feature. Thus, half the field had been selected by the time the action begun. The other 15 cars wilt come as the result of time trials and heat races.

There was one catch however; the times posted by the 15 cars already guaranteed a spot in the feature would determine their starting position. “That means you’ll have to go all out,” remarked one driver. “If you want a good starting spot, you’ll have to run fast under time.”

The ever-so tricky Tri-Oval track was the first leg of the event and on September 24th, approximately 75 drivers checked into the pit area ready to do battle. It was a chilly night, better suited for high school football than auto racing, but 2,500 braved the autumn air to watch the best in the Midwest compete.

After earning the pole position and then dominating the 50-lap feature, Ed Sanger declared that Tri-Oval would be the most challenging of the three tracks.

“I felt this was the place you had to do well if you want a shot at winning the crown,” Sanger noted after the race. “It’s the most demanding of the three tracks we’ll race this weekend. It requires more of the driver. I consider it an exceptional start for me.”

Exceptional may have been an understatement on Sanger’s part. He earned the pole position with a time of 21.47 seconds and proceeded to power out front at the drop of the green. “Fast” Eddie out dueled Tri-Oval track champion Dave Noble of Blooming Prairie, Minn., using the preferred high line throughout the contest. The only time Sanger left the groove, was to lap slower moving vehicles.

Sanger steadily crept up on the back of the pack and eventually got jammed behind four slower cars. Always the opportunist, Noble spied a small opening and crept through, into the lead. But his moment of triumph was short lived as two laps later, Sanger pushed ahead by using the inside lane while coming out of the west turn. 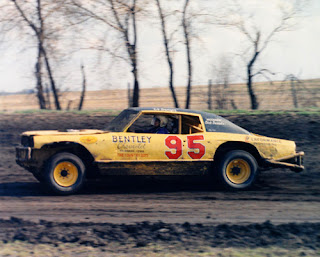 Ed Sanger of Waterloo, Iowa would score the victory at Tri-Oval Speedway in Fountain City, Wis., on September 24. Sanger would go on to win the overall title a week later.

Over the final 35 laps, Sanger kept charging, and Noble’s challenge faded during the stretch run. Sanger collected $700 for the victory plus lap money and a beautiful 5-foot trophy.

Noble would settle for second, with Bill Zwanziger of Waterloo, Iowa in third, John Connolly of Delhi, Iowa fourth and Cecil Henderson of Dakota, Minn., rounding out the top five.

The second leg of the race was supposed to occur at Farley the following night, Saturday, September 25th. But as it happens, when attempting to put on a special race event either early or late in the season, Mother Nature puts a sudden halt to any and all activities. The race was postponed until the following Saturday.

On Sunday, September 26th, drivers and fans converged upon the half-mile of the Stephenson County Fairgrounds in Freeport, Ill. It had rained most of Saturday and Sunday morning and afternoon, but that didn’t seem to deter any of the drivers. Well over 100 cars checked in for the evening, all of them wanting a slice of the cash pie being offered.

The evening’s program was delayed 80 to 90 minutes before time trials were able to get off the ground, and surprisingly, despite all of the rain, the track was in better than average shape.

One guy who thought the track was just right was Bill Beckman of Lisbon, Iowa. Beckman, who finished a respectable sixth on at Fountain City, had things going his way on the half-mile at Freeport.

Like Ed Sanger on Friday night, Beckman set fast time in qualifying and darted off to the lead from the pole position for the 50-lap main event. Beckman was never in any serious trouble during the race and picked up the winner’s share of the purse, $750. Sanger remained hot, finishing second behind Beckman and extending his overall point’s lead for the $1,500 bonus. 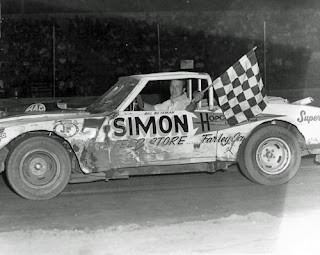 
In addition to Beckman winning the feature and Sanger building up his point’s lead, the biggest excitement this evening was the owner of Freeport Raceway being arrested for going past curfew and breaking the noise ordinance.

Frank Larson of Loves Park, Ill., was arrested on multiple charges by the Stephenson County Sheriff’s department, of which two of the charges included conducting auto races after 11 p.m. and refusing to stop the race when advised of a sheriff's order that the race be halted.

Freeport Raceway had been the object of many complaints of noise during the summer’s Sunday evening racing programs. Those complaints culminated in the county board’s hiring sound engineers for about $1,000 to measure the sound levels at the races.

Larson mentioned that because of the rain delay, the event was late in getting started. When the authorities showed up, Larson explained to them that the 50-lap feature had “between 5 and 10 minutes left” and asked for a little more time. Captain Gerald Hille of the Stephenson County Sheriff’s Department asked him to stop the race, right there and then, but Larson wouldn’t and didn’t comply. The checkers waved on the feature at 11:20 p.m.

As Bill Beckman was presented his trophy in victory lane, Frank Larson was getting handcuffed and escorted off the grounds in a squad car.

“Once you start a race, you’re not going to get those fellows off the track,” Larson would say later. Race drivers from as far away as New York, Colorado and Canada came for Sunday’s race, and neither drivers nor fans would have agreed to a cancellation without the possibility of a major disturbance,” Larson added.

The following Saturday, October 2nd, the third and final event of the Triple Crown Dirt Track Championships finally got underway at Farley Raceway. Owner Irv Valentine had the track in great shape and once again, the car count was excellent with close to 90 late models checking in.

As was with the first two races, the winner of the race came from the pole position and completely dominated the championship feature. A stellar crowd was on hand with fans from Iowa, Illinois, Minnesota and Wisconsin there to witness the grand finale. 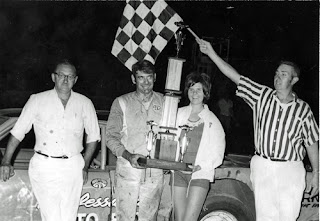 Fred Horn receives the checkers and trophy after winning the third and final leg at Farley, Iowa on October 2. Track owner Irv Valentine is on the left. - Beetle Bailey Photo/Kyle Ealy Collection


Fred Horn of Marion, Iowa, who set the evening’s fast time at 23.77 seconds, took the lead immediately and despite being threatened seriously twice in the race, maintained the top spot throughout. Ed Sanger was the first to attempt to unseat Horn but lost his footing on the track, losing two spots in the process. Darrell Dake gave Horn a good run for the money just past the midway point of the race, but again, Horn had too much motor.

Irv Janey of Cedar Rapids, Iowa would follow Horn across the start/finish line a quarter of a lap behind for runner-up honors with Dake, Bill Zwanziger and Terry Ryan of Davenport, Iowa rounding out the top five.

Sanger, after two strong runs the weekend before, would finish a disappointing seventh after experiencing engine problems. Sanger, however, would still accumulate 43 total points to take the $1,500 bonus and claim the overall title to the Triple Crown Dirt Track Championships. Noble and Zwanziger would finish tied for second place with 29 points apiece. 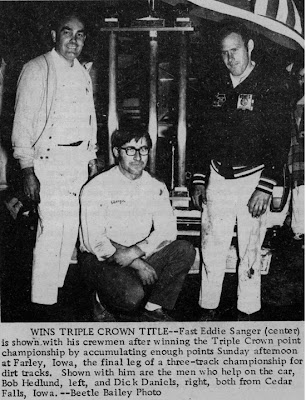 The 1971 Triple Crown Dirt Track Championships had a little bit of everything for everyone...

It was a three-day event that would last a little more than a week - each race had a dominating winner - one track had a race owner, whose motto was “the show must go on”, did just that and went to jail for it.

And it drew the best late model drivers from near and far to compete.