The Black Deuce: King of the Belleville High Banks 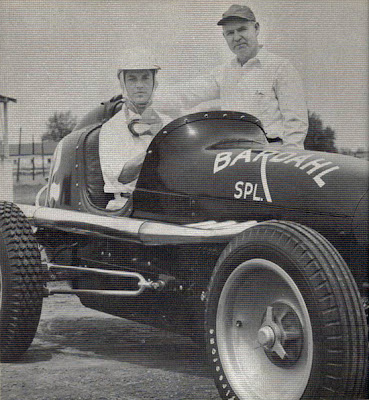 by Lee Ackerman
Belleville, Kan. - In the mid 1950’s a young farm boy from Central Nebraska started attending the Nebraska State Fair in Lincoln on an almost annual basis. The highlight of those one day trips were the IMCA Big Car races playing before a sold out grandstand of over 15,000 fans. It was here that the first seeds of a love affair with auto racing were sewn.

If you ever heard its sound you will never forget it, the sound of the Offenhauser with its one of a kind roar. It was here that a love affair with racing began. It was here that a certain car captivated the young boy’s mind as it did to so many others. Anybody who was lucky enough to attend IMCA Big Cars in the 50’s and early 60’s will never forgot the rooster tail of dirt that was propelled into those white wooden fences by those cars. But one car would standout; it was black and carried the number 2. On the side of the hood it said the Bardahl Special but to race fans it will always be remembered as the Hector Honore Offenhauser.

A couple hours southwest of Lincoln, sits one of the scariest race tracks ever built. The legendary Belleville High Banks. In the six IMCA races held at Belleville in 1951 and 1952 the Black Deuce, with Bobby Grim behind the wheel, either came up just short of a win or experienced mechanical problems.

On May 30, 1953 the largest crowd ever to attend a race at the High Banks, more than 6,000 race fans overflowed the facility to watch Grim and the Black Deuce steadily improve throughout the contest. Starting with a third in time trials, a second in the heat and the first feature win at Belleville in the 20-lap “Bill Holland Trophy Dash.” It does not appear that Grim returned to Belleville for fair races on September 1st.

The following May Grim was leading the feature and engaged in a wheel to wheel battle with Bob Slater when the two locked wheels sending the Black Deuce into the south turn fence. Grim suffered an injured shoulder which would keep him out of action for about a month and the Honore Offy suffered extensive damage estimated at $2,000.

For the July 1, 1954 event, Grim did not return to Belleville but the Honore Offy was back with Don Branson behind the wheel and they teamed up to win the 25-lap feature in record time. It would be the start of a big series of wins for the Black Deuce at Belleville.

Bobby Grim returned to Belleville to pilot the Honore Offy on September 1st and he must have figured out how to get rid of the gremlins at Belleville because he would not only score a clean sweep and set a new track record in the 25-lap feature, it would be the first of his six feature wins in the next 8 IMCA events at the high banks.

In 1955 Grim won both IMCA events held Belleville, first driving away from the field in the 20-lap Memorial Day event, then returning in September to sweep every event he entered finishing with a smashing win in the 25-lap feature. In 1956 it appears that Grim and Hector Honore passed on both events at Belleville most likely racing choosing to race at the Iowa State Fairgrounds on the August 30.

Bobby Grim would race the Hector Honore Offenhauser for two more years 1957 and 1958 before receiving the call to go Indy car racing. That would mean three more appearance for the team at Belleville and three more wins. At the annual Memorial Day race in 1957 Grim thrilled the 6,000 fans in attendance with a clean sweep.

The next Memorial Day Grim won only one event but it was the 25-lap feature. On August 27, 1958 Grim returned to Belleville for the final time and once again registered a clean sweep, setting fast time winning his heat with a last lap pass of Red Amick, winning the dash and the 20-lap main event. Bobby Grim had indeed overcome the gremlins of Belleville and would win the last six features that he competed in.

The year 1959 would see Bobby Grim at Indianapolis, and a veteran named Pete Folse from Tampa, Florida would sit behind the wheel of the Black Deuce. There may have been a new chauffeur in the car but the results would be the same. Six times Folse would race the now legendary Black #2 at Belleville and six times he would come away with a feature win.

Actually Folse had to battle the rain and a tough competitor by the name of Jim Hurtibuse to come out on top in the Memorial Day 1959 event. Rains the night before and in the morning delayed the start of the event by 1 hour and 15 minutes. Hurtibuse would set fast time and win his heat with Folse winning his heat and the trophy dash. Hurtibuse then actually led the race and the duel between the two until retiring from the event.

On September 3, 1959, Folse scored his second feature win at the Belleville High Banks taking the 20-lap feature event. He had to work hard for a clean sweep on May 30, 1960 edging out Barry Hays of Topeka at the line to win the trophy dash before winning the 20-lap feature.

After scoring another win on September 2, 1960, the IMCA Big Cars would not return to the High Banks until May 30, 1963 for what would be there final appearance. After 25 laps in the feature Folse and the Black Deuce were in victory lane once again.

Few cars have every dominated a racing facility in a national series as did Hector Honore and the Black Deuce. It really didn’t matter who was behind the wheel, the car and the little mechanic from Pana, Illinois named Hector Honore usually ended up in victory lane.