Gordon Woolley: Even an Outlaw can win a Championship 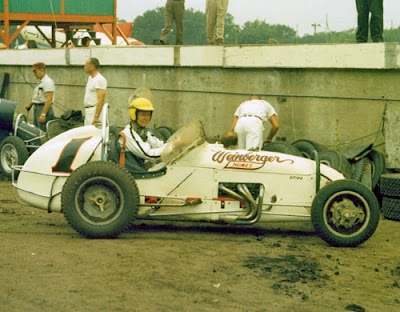 
by Lee Ackerman
Omaha, Neb. - The dictionary defines an outlaw as “someone outside the law.” In auto racing, the term has usually been used to describe someone who did not run regularly with sanctioning bodies but just ran wherever he wanted to. One of the first drivers that I can remember that fits that description to the letter was Gordon Woolley.

Woolley started racing jalopies in the 1940’s in his hometown of Waco, Texas and moved on from there. He would later become known for his black boots, scarlet driving suit and yellow helmet. But he was best known as a “real racer”, one who would race anywhere and everywhere with anyone and the miles he put on his vehicles to get from racetrack to racetrack showed it.

For years he drove all over the country as a driver for hire. He would be gone for weeks at a time. It was said that he always returned home with two suitcases; one filled with all the money he had won and the other with dirty clothes.

Woolley began racing with IMCA in 1960. The IMCA Sprint car series was a steppingstone to USAC and the Indy 500 back in those days. He would finish 10th in points that first year with IMCA winning at Northwest Missouri State Fairgrounds in Bethany. In 1961 he finished 11th in points after a serious accident in mid-season winning at Meyer Speedway in Houston. Consistency, but no wins got Gordon an 8th in IMCA points in 1962. During these years Woolley would race many other places as he was too independent to be tied down to one circuit.

Woolley started the 1963 season driving the Chet Wilson Chevy. As was tradition, the IMCA Sprint Car season started at the Florida State Fairgrounds in Tampa. On February 9, Gordon qualified sixth and then finished third in the second heat. He was running second to Pete Folse in Hector Honore Offy when Folse experienced a problem and Woolley shot by and took the win. It would be the highlight of the four race meet for Woolley and he left Tampa in seventh place in the points after Folse won the last three races.

By the time the IMCA Sprint series raced again on the Winchester High Banks on May 12, Woolley had switched rides and was now behind the wheel of the Colvin-Young Chevy. He would finish fourth in his first outing in that car. Five days later at Illiana Speedway he would qualify third and finish third. On May 25 at Sun Valley Speedway in Anderson, Indiana it was the 15th running of the grueling “Little 500.” Gordon continued his consistency and came home third.

At Des Moines on June 2 he ran second to a Johnny White in the Weinberger Chevy in the Hawkeye Futurity. A sixth at Dayton and a fourth back at Winchester and another runner up to White and Woolley was still holding down third place behind White and Folse. White made it four wins in a row at Hawkeye Downs on July 4 and was starting to build a substantial lead over Folse and Woolley.

After 17 days off, the series went to Winchester again with Woolley getting a fifth and White tenth. On July 26 the series entered the fair stage and with races almost daily. In fact they ran at both Champaign, Illinois and Minot, North Dakota on the 26th. Folse won at Minot with White third and Wooley fourth at Champaign. Folse won again at Chippewa Falls, Wisconsin on the 28th with White second in the Lempelius Offy. Wooley would finish 10th in the Goodrich Chevrolet.

Woolley got back on track at Lacrosse, Wisconsin winning in the Colvin-Young Chevy. White responded by winning one of two shows at Knoxville, Illinois. Woolley beat Folse at Eldon, Iowa. Then a strange thing happened. Johnny White bolted to USAC and Gordon Woolley ended up in the Weinberger Chevy. In his first outing in the car he won the feature at Ionia, Michigan. That same day, Folse won at Springfield, Missouri. Suddenly the IMCA championship had become a battle between Woolley and Folse. Could Woolley give Chevrolet an IMCA Championship or would the Hector Honore Offy win its eighth championship in nine years.

Woolley won again at Wausau, Wisconsin with Folse fourth. Woolley lost a wheel the first day at Sedalia but came back to set a new track record on the mile and run second to Al Unser in the feature. Woolley now had a 241 point lead.

From this point in the season the wins for Woolley and Folse slowed down as the competition got even stronger as big name drivers migrated to the Midwest to run the busy fair season. In fact, Folse would not garner another IMCA feature win the rest of the season. On August 24 Woolley would pick up a big win at the Iowa State Fair in Des Moines. New Mexico’s Al Unser would take home the 50 miler on the mile at Sedalia the following day.

Woolley would continue to pick up wins during the busy big fair season winning on September 5 at the Nebraska State Fair in Lincoln and then again the following week at Topeka and finally on September 15 at Muskogee, Oklahoma. Woolley would pick up one last win this time on the paved facility in Nashville, Tennessee and coast to the 1963 IMCA Sprint Car Championship. His win would give Chevrolet their first IMCA Sprint Car Championship and would bring to an end the long reign of the Offenhauser.

By this time in his career, the lanky Texas was averaging 60,000 miles a year going to and from race tracks. He preferred the dirt tracks to the high banked paved ovals of USAC. He did get a chance in USAC Sprints in 1964 but it was short lived. “I got out of the car to get a drink of water, and when I got back, the owner had another driver sitting in the car.” said Woolley.

In 1964 Woolley also would get an offer for Indy in the Dayton Walther car but it didn’t work out. “My chance didn’t work out. I guess I wasn’t suppose to race at Indy. A lot of guys I knew never got a chance to take the rookie test. I know I could have raced if I hadn’t hurt me eye.” Woolley recalled later.

Woolley would return to racing in IMCA finishing 13th in the IMCA standings in 1964, picking up a win and then 3rd the following season in Hector Honore’s Black Deuce registered several wins and also picked up a CRA win at El Centro in the Pop Miller car.

Woolley would continue to race with IMCA off and on throughout his career but also you could find him hitting more outlaw shows as well. 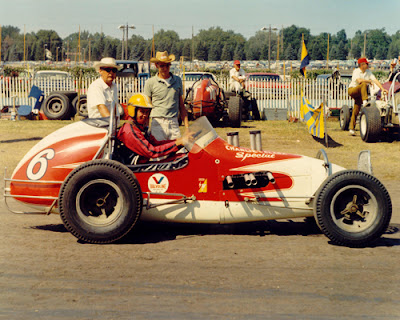 
In 1972 Woolley would race his final Sprint Car race at the Devil’s Bowl in Mesquite, Texas, although he would continue to drive stock cars in the Waco area. The World of Outlaws did not arrive on the seen until 1978 and before that there was Jan Opperman, Bobby Allen and others. But before them there was Gordon Woolley, “A True Outlaw.”

Special thanks to the National Sprint Car Hall of Fame & Museum for letting me use some of their materials for this story.