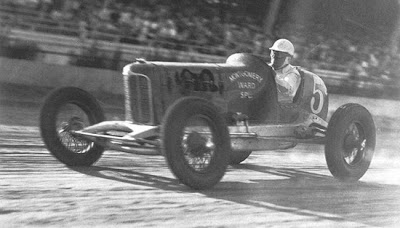 Chicago, Ill. (January 24, 1938) - Gus Schrader of Cedar Rapids, Iowa, five times world dirt track racing champion, has issued a challenge “to any driver in the world” for a series of match races on dirt with a $5,000 side bet.


Backed by the Racing Corporation of America which contends it stages 75 per cent of all dirt track racing in the United States, the 48-year-old veteran will defend his title either on half mile or mile tracks - or both.

Schrader has been racing 24 years. He holds approximately half the dirt track records in existence and for five years has been the kingpin of the racing circuit under the sanction of the International Motor Contest Association.

If his challenge is accepted, it will be the first similar series since Sid Haugdahl defeated Ralph De Palma three out of five races at Ascot in 1923.

The sandy-haired Iowan won his dirt track title against the toughest sort of opposition. Racing for the RCA, which now is headed by John A. Sloan Jr., “Gloomy Gus” met picked drivers on a circuit, traveling to 41 cities from Massachusetts to Montana and Minnesota to Florida.

Sloan is the son of the late J. Alex Sloan, pioneer-racing promoter, who broke with the American Automobile Association to found the International Motor Contest Association. J. Alex was credited with making Barney Oldfield famous; he picked Leon Duray off a street corner and made him a threat in the 500-mile classic at Indianapolis, and gave first opportunities to Tommy Milton, Sid Haugdahl and others.

Sloan and his troop operated before 2,545,821 spectators in 1931 and completed their fourth consecutive year without a fatality either to driver or spectators.

“We have plenty of crashes, but few fatalities,” Sloan said. “When there's a crash our drivers know what to do. It’s the inexperienced driver who begins to panic that causes most of the trouble around a racetrack. We won't let them race until they’re ready for fast competition.”