Bob Welborn - The King of the Convertibles 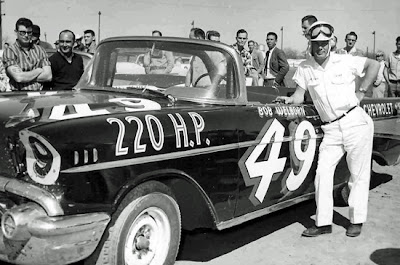 Omaha, Neb. - In 1952 The Society of Autosport, Fellowship and Education (SAFE) was founded by Chuck Scharf. It started racing in the Chicago area but over the next couple of years expanded its operation. In 1955 the series toured the country as an all convertible series called the Circuit of Champions “All Stars.” In December of 1955 SAFE merged with NASCAR and in 1956 NASCAR started its own convertible series which ran through the 1959 season. When we look back on the NASCAR convertible series, one name comes to mind, Bob Welborn. Welborn was the King of Convertibles.

Bob Welborn of Denton, N.C., may have been too logical for his own good. He won the first NASCAR championship race ever held at the Daytona International Speedway. It was the first 100 mile preliminary championship. In winning, Welborn averaged 143.198 mph. At Daytona he never won much else.

It was in 1956 that Welborn found his niche in the newly formed NASCAR convertible series. Bob reasoned that the convertibles were going to take over the sport because the fans could see the driver. Bob got himself a Chevy factory ride when the company came into racing. Welborn would compete in 45 of the 47 events winning for the first time at the Champion Speedway in Fayetteville, N.C., on April 8, 1956 driving a 56’ Chevy. He would finish the season with 3 wins and the series championship. In 1956 Bob competed in only six Grand National events.

In 1957, behind the wheel of a 57’ Chevy, Welborn would once again rule the convertible series grabbing 9 poles while running all 36 events. He would win six times including 5 in a row and grab his second straight convertible series championship. Bob would compete in only 4 Grand National events in 1957 but driving his own car won his first Grand National event the Old Dominion 500 at Martinsville on October 6. 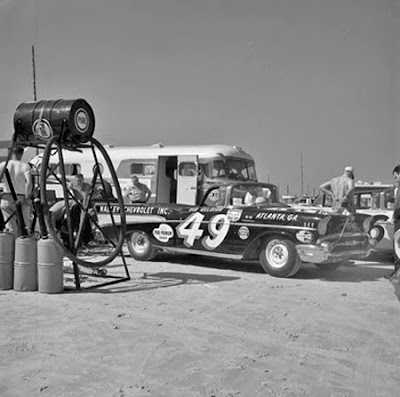 In 1958, still behind the wheel of a 57’ Chevrolet, he dominated the 19-race schedule in the convertible series grabbing 6 poles and winning 8 events and his third straight series championship. He also had a great year in the Grand National ranks racing in just 18 events he scored 5 wins behind the wheel of Julian Petty’s 57 Chevrolet winning at Fayetteville, Martinsville, Greensboro, Winston-Salem and Myrtle Beach.

By 1959 Welborn realized the convertible series was on its last legs having been rendered obsolete because of the superspeedways where the aerodynamics were simply not as good on convertibles. He did not compete for the title setting out the first two races and competing in only 11 of 15 events. Still in his faithful 57’ Chevy he won two more races and a pole. During his convertible series career Welborn competed in 111 events won 19 races, 18 poles and 3 of the 4 championships.

In the Grand National division that year he entered 29 of 44 events driving both a 57’ Chevy and a 59’ Chevy. He started the season with a bang wheeling Julian Petty’s 57 to a win in the season opener at Fayetteville. Then driving his own 59’ Chevy he won the 100 mile qualifier at Daytona to earn the pole. Unfortunately he retired after 75 laps with engine problems. Bob would record 5 poles that year winning 3 races as he added a late season win at Weaverville, NC.

From 1960 through 1964 Bob would race in 68 Grand National events scoring 14 top fives but no wins or poles. At the end of the 1963 season reasoning that racing at reached its plateau he retired He did run 3 races in 1964 with two top five finishes. Another reason was that he watched as his kind of race tracks disappeared and were replaced by the superspeedways. His forte was the short tracks and not the superspeedways. During his Grand National career he ran in 183 races scoring 9 wins and 7 poles. During his career he would hold over 20 track records in different divisions.

It is difficult to think of Bob Welborn without remembering the ever-present cigar in his month. That cigar was the key to the man. If it was small and frayed from chewing, Welborn had problems. If the cigar was new and full and he puffed on it, Welborn was doing well. But he was most dangerous when he held it in his fingers because even if he was talking he was also thinking and he had found an edge on you or other rivals.

In 1982, Bob was inducted into the National Motorsports Press Association’s Hall of Fame. He was also named one of NASCAR’s 50 Greatest Drivers. Bob passed away on August 10, 1997. One thing is for sure when you think of the NASCAR Convertible Series, the first name that comes to mind is Bob Welborn. 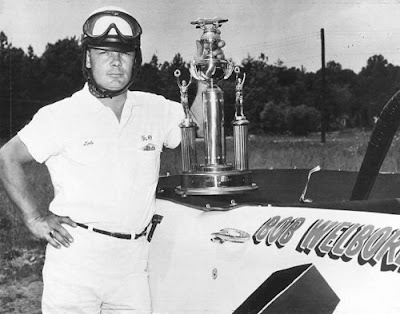 Bob Welborn racks up another win.