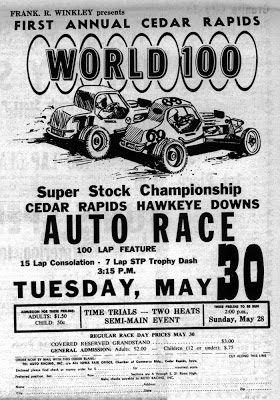 
By Kyle Ealy
Cedar Rapids, Iowa – In 1971, promoter Earl Baltes created an event like no other. The very best drivers from all parts of the United States would come together in Rossburg, Ohio and compete against each other in a 100-lap race at his track; Eldora Speedway.

As we all know, the event was a smashing success from the beginning and developed into one of the crown jewels of grass roots racing. It was called the World 100.

Frank Winkley and his Auto Racing Inc., was a long-time promoter of IMCA stock cars, big cars (sprints) and midgets on the “fair circuit” for many years. Hawkeye Downs Speedway was, among others, one his venues in which he promoted events. One of the more popular events he promoted there was the Hawkeye 200 for IMCA stock cars held in late April.

In January of 1968, “Wink” as he was called, signed a contract with the All Iowa Fairboard and took over the weekly racing program there, which had gone into decline over the past few years.

When Winkley came aboard in January, he announced that a new race for super modifieds would be held on Memorial Day Weekend. And this wouldn’t be just any race…

Instead of the standard 25-lap feature that super modifieds were accustomed to, the feature would go 100 times around the quarter-mile. Winkley also set the purse much higher than what cars of this nature ran for; $4,200. His thinking was with the higher purse, he would lure the very best talent in the world of super modified racing.

It would be a two-day event with time trials and preliminary events on Wednesday, May 30th with the consolation, STP trophy dash and 100-lap main event on Thursday, May 31st.

With 100 laps of racing, fuel consumption would be the biggest concern for drivers. Jerry Blundy played the role of a miser with his gasoline and captured the feature. The Galesburg, Ill., veteran, in his 19th season of auto racing, measured practically every drop of fuel that went into his tank prior to the 100-lapper. 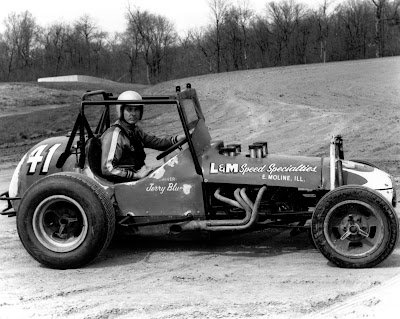 
Jerry Blundy had enjoyed a big night in the preliminaries Wednesday, when he set the fastest qualifying time. But he admitted before the feature his strategy was merely to make sure he finished the race. He let someone else set the pace. Any fuel worries Jerry possessed were for naught, however. At the end of the marathon he still had "about 10 gallons" remaining.

Blundy's big advantage actually was the fact he didn't have to pit for fuel. "I started to worry about my strategy," he said. "For awhile I didn't know if it was going to work."

For the first 50 laps it was a battle between Earl Wagner, who held the lead, and Russ Laursen and Blundy, who exchanged second place three times in that distance. Only a car length separated the trio most of that time.

Blundy made his bid for the lead on lap 65, dipping down inside Wagner on turn four to move out in front. Three laps later, Wagner headed for the pits for fuel and a tire change. Then, on the 70th circuit, Laursen made the first of his two fuel stops which proved disastrous.

In the meanwhile, Lee Kunzman of Guttenberg had made his move from the rear of the pack and zipped into second when Wagner and Laursen made their stops. Kunzman, the former Downs late model ace, finished on the same lap with Blundy although he ran out of fuel on the final tour.

Blundy took home a sizable paycheck for his two nights of work. Jerry won $750, including $500 for winning the main event. The near-capacity crowd not only appreciated Blundy’s victory but the skills displayed by the other top finishers.

For Winkley though, the race was not a success. Only 11 cars showed up after it had been advertised that no less than 24 drivers had already filed entries and a field of 30 was expected when the usual late-comers arrived.

Winkley was beside himself when he discovered the number of absent drivers. "I'm slowly losing faith in a driver's word," Winkley was quoted in the Cedar Rapids Evening Gazette. "A signed entry form is the same as a contract and it should be honored by both parties at all times”.

“I wish I had an explanation for it. I don’t know if the drivers (who failed to appear) found a better deal somewhere else,” a disgusted Winkley told the paper. “We do know that a few attended the funeral of a friend and competitor, Harry Kern in St. Paul late Wednesday afternoon.” Kern had been killed a week before in the Little 500, the same race many of the missing drivers had competed in.

"If I knew this was going to happen, I would have cancelled the program. But I had close to $1,000 already invested in advance publicity.”

Then “Wink” made an unprecedented move. It was a move that made him one of the best promoters of his era. He took the microphone prior to the first race and announced that all adults would be granted a $1 admission ticket to be applied toward any future race that season at Hawkeye Downs.

Over 3,400 tickets were shelled out for the event but Winkley felt he had to make the gesture and nobody argued with it. "I don't think it was a matter of guts," he said. “It simply was necessary. I don't want the race fans to feel like they've been taken.”

Despite the low car count and losing a little money, Winkley was encouraged by the competitiveness of the race and the crowd response. “We’ll definitely have this race again next season,” Winkley mentioned. “I won’t let a good idea die”.

But unfortunately, the idea did die along with a great promoter. Two months later, while coming home from a race, Frank Winkley lost control of his vehicle on a two-lane highway near his home of Minneapolis and was killed instantly. Verna Winkley, his widow, took over the reins for the 1969 season but didn’t continue on with the super modified special for one reason or another.

The original World 100, like a lot of other Frank Winkley promoted races of that era, was history. But it is just that, a piece of history that an innovative promoter can lay claim to as being the first with the idea.