1989 - Five races, five faces in All Star tilt at Volusia

by Kyle Ealy
Barberville, Fla. (February 8-12, 1989) - An all star cast of top-notch sprint car drivers headlined the All Star Sprint Winternationals at Volusia County Speedway.
But unlike previous years, the winners were not the familiar household names you come to expect in victory lane. Steve Kinser, Sammy Swindell, Dave Blaney and Jack Hewitt were all in attendance but new names dotted the headlines at the end of the five consecutive nights of racing. 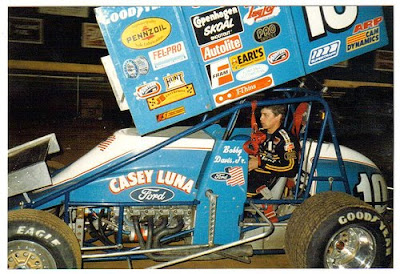 Bobby Davis Jr., piloting the Casey Luna Gambler, won the opening night of the All Star Sprints Winternationals at Volusia County Speedway. Davis would go on to win the World of Outlaws title that season as well.

On Wednesday night February 8th, Bobby Davis Jr. was the class of the 20-car field and took home the $3,000 payday shelled out by track owner Dickie Murphy. Davis started on the front row opposite Robbi Stanley and quickly darted out to the lead and never slipped in the 20-lapper.

Davis was so fast that prior to the first and only caution flag that waved on lap 16, he had put top-name drivers such as Danny Lasoski, Jac Haudenschild and Steve Smith Jr. a lap down. When the checkers waved, he had added Bobby Allen, Kenny Jacobs and Rocky Hodges to that list.
Fast qualifier Sammy Swindell grabbed runner-up honors while Keith Kauffman, Stanley and Randy Kinser rounded out the top-five.
"We had a pretty good run tonight," Davis said in victory lane after the race. "Pretty good" was an understatement.
The next night, Thursday, February 9th, the biggest upset of the five nights would occur. Steve Stambaugh, running the Apple Chevrolet sponsored Gambler for only the second time, shocked a chilled crowd, finishing first ahead of four of the top drivers in the country.
Jac Haudenschild jumped into the lead of the $3,000-to-win 20 lap event. It was a matter of three laps later when Sammy Swindell, driving a brand new Gaerte-powered Challenger, took charge on the outside of turns three and four, taking the point coming down the front stretch. 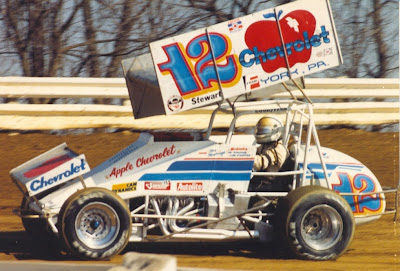 Steve Stambaugh shocked a chilly crowd by capturing the second night of the All Star Sprints Winternationals. Stambaugh passed Sammy Swindell and then held off a stellar field of sprint car drivers to post the victory.

Just as Swindell looked to be on his way to a "sure" win, the chassis mysteriously stopped working on lap 8. Stambaugh, now running second after starting fifth, sped past the fading Swindell and never looked back in picking up the win in what would be the shocker of all five races. Stambaugh held off Haudenschild, previous night's winner Bobby Davis Jr., the fading Swindell and Bobby Allen.
Friday night, February 9th, yet another new winner in victory lane. The newly-formed Petitte-Cook sprint car team with Keith Kauffman behind the wheel, snared the $3,000 first-place money out of Steve Stambaugh's hands.
Stambaugh started on the pole with Kauffman to the outside of him. Dave Blaney and Sammy Swindell were settled in on the second row with Fred Rahmer and Bobby Allen next.
It was Kauffman who surged into the lead with Stambaugh, Swindell and Blaney following. As lapped traffic quickly came into play, Stambaugh poured it on and passed Kauffman on lap 7. What should of been "money in the bank" for Stambaugh was quickly withdrawn when a drive line failed and he pulled into the pits on lap 17 as Kauffman happily took over the top spot and held it to the checkers.
Swindell held strong for second while Rahmer enjoyed his best finish of the tour in third. Bobby Allen, the only driver to crack 15 seconds in time trials, crossed the finish line in fourth ahead of Dave Blaney.
The '89 Winternationals hadn't been too kind to Frankie Kerr. He had been battling pneumonia for the past couple of days, which had kept him on the sidelines. On Saturday, February 11th, Kerr spent most of the day in bed but managed to get himself up and despite getting to the track late, qualified sixth fastest out of 58 cars. After qualifying in his heat, Kerr started on the pole opposite Keith Kauffman.
The difference between Kerr and everyone else that night was the tire and shock set-up. Track owner Dickie Murphy used a citrus pulp mixture in his track preparation each night and like every other evening, it had the driver's guessing on proper set-up. Kerr guessed right; "We went with ProShocks and Goodyear's tonight. The compound was probably too hard, but it worked."
Kerr qualified through his heat, started on the pole and completely dominated the 30-lap, $5,000 to win main event. Bobby Davis Jr., Bobby Allen, Dave Blaney and Danny Lasoski tried to keep up with Kerr but it was to no avail.
It was just what the doctor ordered...
The finale, on Sunday evening, February 12th, produced the fifth new face to to the winner's circle. Once again, a driver who hadn't had the best of luck on their trip down south, took the win. "I would have been happy just to win a heat, things have been that bed, said Kenny Jacobs, after earning $5,000 in a thrilling 30-lap finale wrapping up the Winternationals. 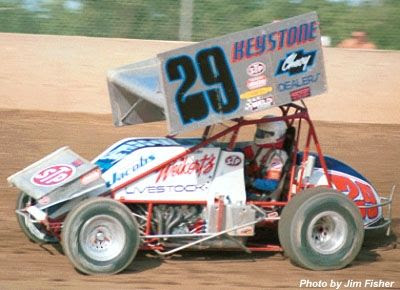 Jacobs started on the front row opposite Tommy Estes who immediately grabbed the lead and looked like another "sure" winner this night. Estes, piloting the J & J built, Bill Beaman owned sprinter, took charge at the drop of the green and built his lead up to five seconds in no time.
But, like Swindell a few nights before, Estes mysteriously slowed and Jacobs, who was running second, caught up to Estes, went to the bottom and easily sped past him into the lead. A battle ensued between Estes, Swindell and Dave Blaney for second allowing Jacobs to widen his lead.
However, with 5 laps to go, a yellow came out bunching the group together for what would shape up to be a helluva finish.
Jacobs started on the inside with Swindell on the outside and Blaney waiting for the chance to take either or both. Swindell tried to take the lead from Jacobs on the front stretch but ran out of room, climbing the wall in front of the flag stand. Swindell miraculously managed to come back down on the track but lost several spots in the process.
Jacobs crossed the finish line pumping his fists in the air with Blaney, Jac Haudenschild, Tommy Estes and Keith Kauffman following behind.
Even though it was "see your breath" weather for the five nights, race fans "held their breath" for five nights of thrilling, suspense filled racing at the 1989 All Star Sprints Winternationals.