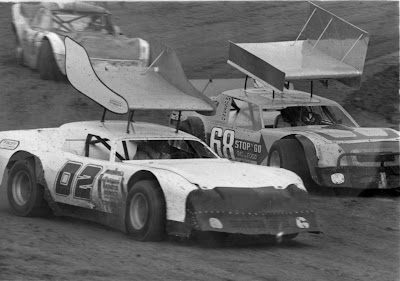 Omaha, Neb. - It came about almost by accident. The idea was an extension of the “run what you brung” rules of the Snowfly Nationals held in Topeka, Kan. In November 1979, they ran the SnowFly Nationals at Mid-American Fairgrounds.” It was to be the last major dirt late model race of the decade,” says Promoter Mike Means.

In 1981 Means became the promoter for a new series called the “National Outlaw Stock Car Association.” Unfortunately the season had one major adversary, the weather. The series opener was to be “the 1st Annual Ozark Outlaw Nationals” to be held at 65 Raceway Park in Branson, Mo., on March 20 through 22. When the event was finally put in the record books on April 5, it was done so under threatening skies and with a certain amount of controversy.

Changing weather conditions and a fluctuating wind made the track hard to predict and presented a real challenge to the drivers. The feature would see Larry Phillips on the pole (Phillips had won the feature the night before in Tucson, Arizona). The outside front row would have Billy Moyer Jr. off a second place finish the night before in the Frostbuster 10,000 at the Missouri State Fairgrounds in Sedalia. The two would put on an outstanding battle for 25 laps before the race was stopped because of a driver being struck in the face by a rock. That driver was John Seets of Peoria, Ill.

On the restart Joe Merryfield of Des Moines had moved up from the back of the pack to join the battle. With just 11 laps to go Moyer and Ken Schrader tangled in turn 4, caused by dusty track conditions when a car entered the infield. After some discussion, Moyer was given his position at the front of the pack back. From that point on it was Moyer and Merryfield battling to the end with Moyer edging out Merryfield at the checkers. 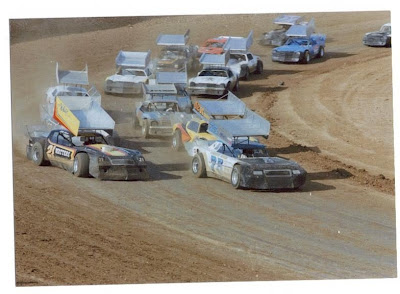 The race judges then got together and after more discussion awarded the race to Merryfield with Springfield, Missouri’s Jake Deemer second, Larry Phillips third and Billy Moyer Jr. was awarded fourth place. A special feature of the NOSCA show was the “Outlaw Shootout” a series of one-on-one races among the top eight qualifiers. Larry Phillips would pick up the $200 first prize with Kansas City’s Gene Claxton finishing second.

On Monday, May 25, round two of the NOSCA season was completed at the Missouri State Fairgrounds in Sedalia. Gene Claxton of Kansas City, Mo., was fast qualifier. Roger “The Racing Lawyer” Thompson of Junction City, Kan., would lead the first 29 ½ laps before being trapped by a lapped car and Kevin Gundaker would slip by and take the lead and the win. Ken Walton would finish third, Don Hoffman fourth and Joe Merryfield fifth. The race would be called the “Missouri Outlaw Stock Car Classic.”

The next scheduled race for NOSCA was to be held on Sunday, June 21 at Tri-City Speedway in Granite City, Ill. The weatherman decided to change that and the event was rescheduled for July 12. Kevin Gundaker continued his winning ways by posting a clean sweep. He set fast time, won his heat and then came back to lead the entire 30 laps of the feature event driving his familiar #11 Camaro. Steve Kosiski would finish second, Bo Smith third, Ken Walton fourth and Larry Phillips fifth.

Action moved to Fun Valley Speedway in Hutchinson, Kan., the next weekend. On Friday night, Kansas driver Clarence Bontrager would set fast time with Larry Phillips setting second quick time. Heats would go to Steve Kosiski and Phillips. On Saturday night Phillips would take the lead from his outside front row starting position and drive a flawless race in taking his winged Interstate Towing Camaro to victory land and a $2,000 first prize. Dhon Hauserman of Wichita would came from the third row to finish second followed by Joe Kosiski, Steve Kosiski and the pole setting Bontranger. 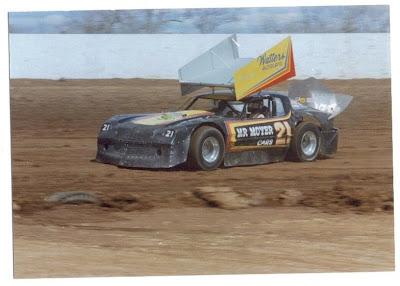 
After a mix up in booking dates and more bad weather, round five of the series was completed on Sunday, August 23 at the Oklahoma State Fairgrounds in Oklahoma City. After completing the first night of racing on August 15, heavy rains forced a one week postponement of the second day of the two day show.

Buck Cadwell of Arnett, Okla., would set a new track record in qualifying as he turned the half mile in 22.90 seconds over one and a half seconds off the old record of 24.58 seconds. The outlaw shootout was won by Ken Walton over fast qualifier Cadwell. Last chance qualifiers went to Larry Phillips and Junior Slay.

In the feature event of the day it was Ken Walton adding another $2,000 to the $200 he picked up in the shootout making it a $2,200 pay day. Following Walton to the line was Larry Phillips, Roger Thompson, Dhon Hauserman and Ferris Collier.

The next round of the NOSCA season was to be the North Iowa Outlaw Stock Nationals to be held on September 5 and 6 at the Mason City Speedway in Mason City, Iowa. That event does not appear to have been held.

The final event of the NOSCA racing season was to have been a three day affair to be held October 2, 3 and 4th at George Butland’s Colorado National Speedway. That event was cancelled when the money behind the NOSCA series disappeared.

“The thing I remember about running with the wing on the car is you had to take drive out of the car so you could get through the corners,” recalls Joe Kosiski. “It was tough on equipment and you could easily blow a motor,” remembers Steve Kosiski.

So ended, the one year life of the Winged Outlaw Late Models called the National Outlaw Stock Car Association. Weather and the lack of funding put a premature end to a novel concept.