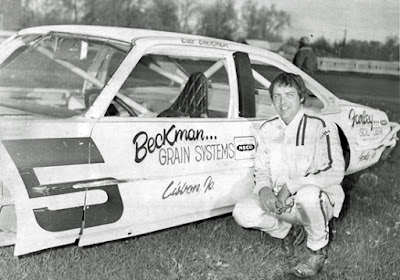 by Pete Temple
Monticello Express Sports Editor
Monticello, Iowa - Bill Beckman didn’t know how much he would love driving a dirt track racecar until he climbed into one.
It was 1967. Beckman’s neighbor in Lisbon, renowned Eastern Iowa driver Roger Dolan, was testing a car during a practice session the day before the opening night of racing at Hawkeye Downs.

In a detailed, fascinating memoir penned by Beckman himself, just weeks before his Dec. 5 death at the age of 80, he describes what happened next.

“Roger got out of the car and handed his helmet to me and said, ‘Get in the car. I want to watch it. And don’t run into anyone!’ ” Beckman wrote.

“I was nervous. I started slow for a couple of laps (and) got the feel of it. Then I nailed it. I had lots of fast street cars, but this was a thrill. It was so much fun the flagman had to run out on the track with a red flag to stop me.

Beckman, who lived in Monticello for much of his life, was a graduate of Sacred Heart High School in 1960. 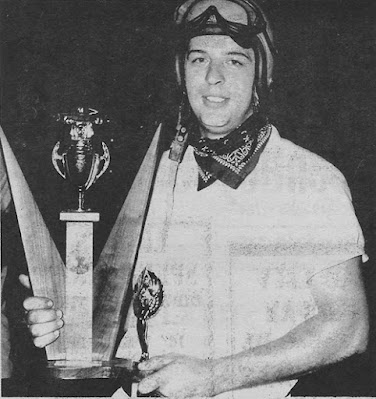 Bill Beckman holds his trophy after winning the Novice championship at Cedar Rapids in 1968.

His racing career lasted 30 years. During that time, Beckman won the Dubuque season championship, was Tri-State champion in Davenport, and was fast qualifier for Davenport’s National Dirt Track Championship.

He won season championships in Tipton and Cedar Rapids, and won races at Hawkeye Downs, Maquoketa, Vinton, Tri-State and Farley.

Beckman lived in Lisbon for most of his racing career, and earned the nickname “Lisbon Leadfoot.”

He competed in Iowa, Illinois, Nebraska, Ohio, Wisconsin and Missouri.

It all culminated in his induction into the Iowa Dirt Track Racing Hall of Fame this past Nov. 12, less than four weeks before his passing.

Getting started
The morning after the 1967 practice session, Dolan pulled into Beckman’s driveway, saw a 1954 Ford sitting there, and told him, “That’s your racecar.”

Despite financial concerns, Beckman wrote that “The next Friday night I was at the racetrack with a 1954 Ford with a 239, two-barrel carb. We got second.”

On two occasions that season, Beckman recalled, other drivers protested that he was driving an illegal car. The first time, he wrote, “the other drivers were saying the car was illegal because the rulebook said cars had to be 1955 or newer. Well, Roger talked to the promoter. He looked at the car and said, ‘It’s a nice car and he can race it.’ ”

The second time, Beckman had to comply and make it a ’55.

“We went back home and cut the body off and made it into a convertible with a 55¼ (-inch) panel, which was the only difference between a ’54 and ’55.”

The memoir, which served as Beckman’s nomination form for the Hall of Fame, details several instances of winning races, working on vehicles, buying and selling auto bodies, motors and parts, and winning more races.

After winning an early-season feature race at Hawkeye Downs, the car went on to win championships in Cedar Rapids and Tipton, as well as fair features in Tipton, Cedar Rapids, Maquoketa and Vinton.

Help from Petty
Beckman’s 1969 season was derailed by a ruptured appendix. He got back on track, literally, in 1970, largely due to a career-changing conversation with NASCAR hall-of-famer Richard Petty.

“In 1970 my friend Ben Jamieson and I teamed up and built a ’69 Camaro convertible,” Beckman wrote. “The first six races I spun out a lot. We didn’t know what to do with the 108-inch wheelbase.

“On a Saturday morning while sitting around the garage, Bill (Jilovec) said, “Why don’t you call Petty? When I did, Richard answered the phone.”

Petty suggested a new set of Chrysler springs, which Beckman agreed to purchase.

“Richard said, ‘Bill, those springs will put that little Camaro right on the program.’ He told me what I had to do, and I had the torch and welder to complete the job,” Beckman wrote.

“What a man he was then, and continues to be today. This car went on to win many races. It beat (Eastern Iowa legend) Ernie Derr twice, at both the Cedar Rapids and Tristate (tracks).

“At the end of the season, I won three races at Erv Valentine’s new Farley Speedway; $970 the first night, $810 the second night, and $760 the third night. Those were big purses back then.”

A movie car
Beckman took a detour from his racing career, so to speak, when he was hired to build a car for a Steve McQueen movie that was being filmed in Florida. Part of the process involved building a roll cage off to the side of the car, so that a cameraman could ride along outside the vehicle.

“I was there for a month,” he wrote. “I had a great time doing what I love, being around cars, and meeting tons of great people.

Beckman wrote that after a divorce in 1973, he sold his racecar and went to work at Star Engineering, while helping other drivers maintain their cars on the side.

More success
He and Ben Jamieson then bought a car from Larry Moore, and put a Horn motor in it.

“This car was a rocket. Driving the car was a win-win-win for us!” Beckman wrote. “We won seven times at Freeport (Ill.). At one point we won nine in a row at West Liberty, Freeport, Eldon and Davenport.”

Along with his success, Beckman also displayed sportsmanship in defeat.

“On the 10th night Johnny Johnson beat me by two feet at Elton in the 50-lap midseason championship,” he wrote. “I started on the pole and Johnny was outside pole. He got the jump on me at the start, and he never made a mistake. Great job Johnny!”

He and Jamieson lost two motors that year, causing Beckman to sell the car.

“I decided to change my focus from racing to my grain bin business (Beckman Grain Systems, Monticello),” Beckman wrote. “I did drive Terry Jamieson’s modified car off and on for a while, but by this time I was in my late 50s. I was getting tired.

“It seems like you just can’t quit. It was difficult because it is not easy to give up something that I loved so much.”

‘A great run’
In his memoir, Beckman also thanked those who helped him, and in particular, “my brother Paul for the endless hours he spent being the best working crew chief and for being with me every step of the way.

“My racing accomplishments would not have happened without great sponsors, and all the great friends who supported me through the years.

“My racing career has been one of the most rewarding experiences I have ever had. Fun, fun, fun! I had a great run.” 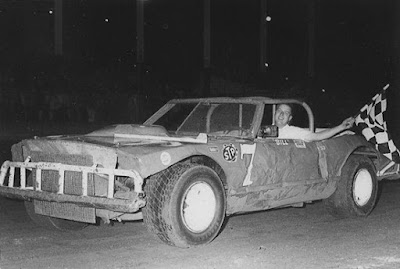 Bill Beckman takes a victory lap at Davenport in 1970.