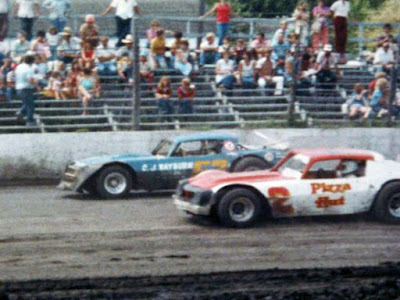 Don Hoffman (2) and Joe Kosiski (53) battle during the Gold Cup Invitational. Kosiski would win the inaugural race in 1980, while Hoffman would be victorious in 1982. - Jerry Adams Photo
by Lee Ackerman

Corning, Iowa - On April 19, 1980, the Adams County Speedway in Corning, Iowa staged the first of what would be four annual season openers called the Gold Cup Invitational. The event was for Dirt Late Models and Limited Sportsman. That first event drew more than 40 late models in a shootout that featured more than $5,000 in prize money.

The four heat races were won by Don Hoffman of Des Moines, Rex Nun of Lincoln, Nebraska, Bob Shryock of Estherville, Iowa and Joe Kosiski of Omaha, Nebraska. How about the C Feature! The drivers that finished first and second in the C Feature are both inductees in the National Dirt Late Model Hall of Fame. Billy Moyer, Jr. then living in Des Moines won the event and Steve Kosiski of Omaha finished second.

In the B feature, Moyer would drive through the entire feature to win that event as well. Following Moyer to the line were Phil Bivins of Nebraska City, Ray Lipsey of Lincoln, Nebraska, and Larry Hiatt of New Market.

In the 40-lap feature, Don Hoffman jumped into the lead at the start and appeared headed to a convincing win, when at about the midway point of the race he stalled in turn two. “I hit a hole in the track between one and two and when I hit the throttle the motor just died.” said Hoffman after the race.

Joe Kosiski picked up the lead with Hoffman’s misfortune and led the rest of the way to pick up the victory. Shryock finished second Denny Hovinga of Pocahontas was third and Nun fourth. Despite his bad luck, Hoffman refired and raced his way up to a fifth-place finish. 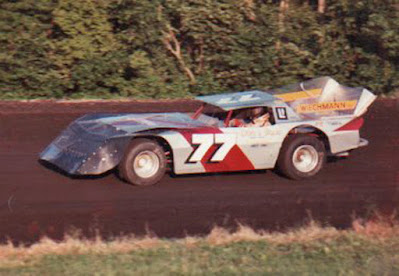 Al Urhammer won the 1981 Gold Cup Invitational. - Jerry Adams Photo
Mother Nature came close to claiming the victory in the Second Annual Gold Cup. First, on Saturday night she brought a halt to activities after the third heat race and then on Sunday she postponed the starting time from 2 pm until 5:45. Heat races went to Al Druesedow of Omaha, Martin Bennett of Des Moines, Billy Moyer and Dwaine Hansen of Lakefield, Minnesota.

When they waved the green flag to start the race, outside polesitter Al Urhammer jumped into the lead and from thereon was never seriously challenged for the win despite some real battles for position behind him. Defending race winner Joe Kosiski made a late charge to take second from Jerry Wancewicz with Bill Martin fourth and Al Druesedow fifth.

While it was a mild, sunny day for the Third Annual Gold Cup held on April 17, 1982, nevertheless the weather did play a factor in the night’s events. The track became increasingly greasy during the night and that combined with it being the first time out for many of the drivers accounted for quite a number of wrecks and mishaps that eliminated a number of contenders.

The late model feature turned out to be quite a race with Walton and Hoffman on the front row and Moyer, Jr right behind. When the race went green, Hoffman grabbed the lead with Walton following all the way back to fifth, but immediately Walton started working his way back through the field to challenge Hoffman.

Around lap 15, Walton took the lead and held it for some time thru several restarts. Late in the race Walton made one mistake and Hoffman capitalized on it and charged to the lead and held on to the checkered flags. Walton was able to hold off a serious challenge from Moyer for second with Bill Martin and Joe Kosiski rounding out the top five. 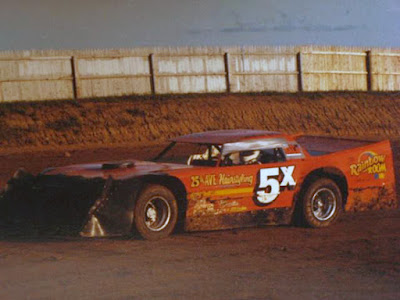 Sam Jacobs was an upset winner of the Gold Cup Invitational in 1983. - Jerry Adams Photo

Sam Jacobs of Columbus, Nebraska was the surprising winner of the fourth and what would be the last Corning Gold Cup Invitational. The April 23, 1983, event saw a good field of cars compete in four heat races.

Mike Smith of Ellsworth bested Bill Wrich of Kennard, Nebraska, and Corning’s Jack Viner to take the B feature.

Weyhrich took the lead at the start of the event, but the fourth starting Jacobs took the lead early in the event and despite getting into a lapped car later in the event, he was able to hold off the challenges of Weyhrich and take home the win. Weyhrich came home a comfortable second with Robey, Hill and Mark rounding out the top five.