1964: The Keokuk Connection and a Perfect Season in IMCA Stock Car Racing


The remaining three giants of Keokuk racing, Dick Hutcherson, Ernie Derr and Ramo Stott had finished the 1963 IMCA racing finishing first, second and third in the points, (Hutcherson, Stott and Derr) and had managed to win 51 of the 56 features contested along the way. But no one could imagine what the three were going to accomplish in 1964.


The 1964 IMCA Late Model Stock Car season turned out to be one of the most remarkable accomplished in sports.  At the end of that season, the series had contested 56 races and ALL 56 were won by one of three drivers hailing from an unassuming Iowa river town on the Mississippi River called Keokuk. 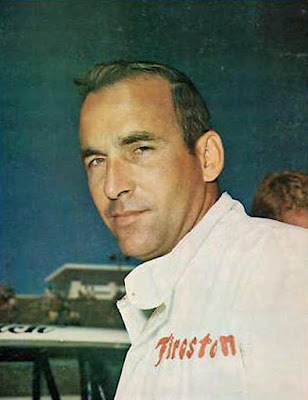 Dick Hutcherson
A record crowd of 10,000 fans welcomed the series to the annual season opener at the Louisiana State Fairgrounds in Shreveport. Dick Hutcherson in his new 1964 Ford broke Ernie Derr’s track qualifying record with a lap of 26.08 and appeared to have things under control until a faulty distributor condenser forced him to cut down his speed and he ended up finishing third. Ernie Derr took control of the race on lap 56 and go on to win the race with Ramo Stott finishing second. Derr was driving a 1964 Dodge as his new 1964 Plymouth had not yet arrived.


Hutcherson countered with a win on May 2 at Knoxville, Iowa, winning the 200-lap feature with pressure from Stott throughout most of the race. Hutcherson set a new IMCA qualifying record as well as new marks at 50, 75 and 100 miles. Ernie Derr countered by winning a 250-lap affair at Hawkeye Downs in Cedar Rapids, but Hutcherson slipped by Stott early in the Memorial Day Classic at Topeka and went on to best Stott for the win. Derr appeared to have third nailed down until an axle went out.


The next day, Derr and Stott each scored a 50-lap win back at Hawkeye Downs. Hutcherson countered again with wins at Memphis, Mo., and Donnellson, Iowa. The trio swapped wins back and forth over the next several races with Stott winning the annual 200-lap Kansas International at Topeka, on the 4th of July holding off Hutcherson by a nose. Ernie Derr was six seconds back in third. At this point in the season, Hutcherson held a 213 point lead over Derr with Stott just 13 points further back.


The drivers were greeted by a wet and heavy track at the Iowa State Fairgrounds in Des Moines on July 12 for the annual running of the Iowa International 300. Stott led most of the first 150 laps, but for safety reasons, the race was halted and regarded. After the restart, Hutcherson took to the heavy and wet track like a duck to water and drove away to the win before 15,000 fans. Bob Reynolds of Edmonds, Okla., got by Stott for second, with Derr, finishing fourth. 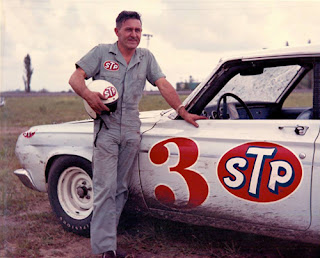 
Not only did the win increase Dick Hutcherson’s point lead, but he then set off and proceeded to win eight more races in a row, with two wins each at Minot, N.D., Fargo, N.D., Cresco, Iowa and Hibbing, Minn., in a run that put the championship pretty much out of reach. The second Fargo show saw Hutcherson wage a tremendous dogfight with both Stott and Derr in the 100-lap affair before Derr retired with a blown rear end and Stott with a broken distributor wire.


Finally, at the Southern Iowa Fair in Oskaloosa on August 5, Ernie Derr broke Hutcherson’s streak by winning the 100 lap race with Hutcherson and Stott following in second and third. The victory started a bit of a winning streak for Derr as starting with the win at Oskaloosa he would win seven of the next eight, with Stott winning at La Crosse, Wis.


August 22nd brought the series back to Des Moines for the Iowa State Fair and Hutcherson regained his momentum by winning their and then followed by with two wins at the Missouri State Fair, one on the half-mile and one on the mile. Stott then won back at Des Moines in a 250-lap affair.


It was then off to the annual trek to the Minnesota State Fair in St. Paul. But in 1964 something had changed. The track had been paved. Some IMCA driver had trouble with the unfamiliar racing surface, Dick Hutcherson wasn’t one of them. He set fast time all three days they were held and then went on to win three of the four features, with Stott winning the other.  The final of these races was the North Star 400, scheduled for 400 laps it was cut short by rain at the 375 lap mark, with who else, but Hutcherson at the front of the field.


Back on the dirt the trio swapped wins again, with Stott winning five times, Hutcherson 4 times and Derr twice leading up to the last four races of the season to be held back at Shreveport. 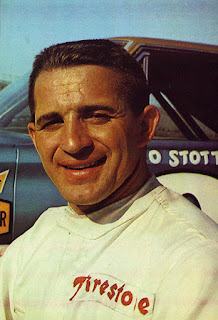 
The four events held at Shreveport can be summed up in one name; Dick Hutcherson. Hutcherson won all four features. The last race of the season proved to be an exciting one as Derr, Stott, Hutcherson and Lenny Funk all held the lead at one time or another. Hutcherson took over the lead for good with 10 laps remaining when Stott had to pit for refueling in the 150-lap race.


This ended, one of the most amazing seasons in auto racing history.  Dick Hutcherson won 29 times on his way to winning his second straight IMCA championship. Ramo Stott won 12 times and finished second in the points with Ernie Derr recording 15 wins and third place in the championship race.


Dick Hutcherson left IMCA following the 1964 season and headed south to NASCAR country.  In 1965, he won nine races in the Holman-Moody Ford and finished second to Ned Jarrett it what is now the Nextel Cup series. Dick would win 22 poles and score 14 wins before retiring at the end of the 1968 season. Later he would be a successful crew chief and then go on to co-found Hutcherson-Pagan Racing. If you ever attend a race of one of NASCAR’s three major series you can count on seeing the Brown and Orange Hutcherson-Pagan hauler somewhere in the pits.


Ramo Stott stayed in IMCA four more years finishing second each of those years to Ernie Derr. In 1965 and 1966 the two combined to win 72 of the 74 IMCA Stock Car races held. Stott would leave IMCA after the 1968 season and go on to race in ARCA and USAC. Stott would win the ARCA Championship back-to-back in 1970 and 1971 and then win the USAC Stock Car Championship in 1975. He would also claim the pole position for the 1976 Daytona 500.


Ernie Derr remained a regular in the IMCA series through the 1971 season. While he did race a few times in other series, he is remembered mostly for his accomplishments in IMCA. Those accomplishments include a staggering 328 career wins and 12 championships. When you mention IMCA stock car racing, the first name that has to come to mind is; Ernie Derr.


In the 29 year history of the IMCA Stock Car Series (1949-1977), Keokuk drivers won 18 championships. From 1953 thru Ernie Derr’s retirement following the 1971 season, only with Johnny Beauchamp’s championships in 1956 and 1957 did the championship go to a driver who did not hail from Keokuk.