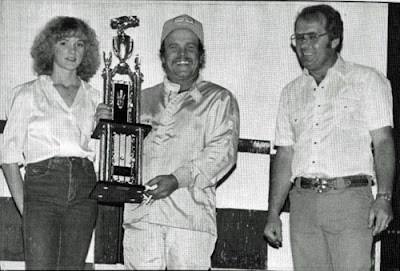 Jerry Holtkamp of Williams, Iowa, was a two-time winner of the All-Star race (1978 and '81). - Fairmont Speedway Archives photo

by Lee Ackerman
Fairmont, Minn. - For a number of years, Fairmont Speedway in Fairmont, Minnesota held an All Star race. The 1977 version of this race was actually held in June and was called the All Star 6000. That inaugural event seemed to be in the capable hands of Estherville, Iowa’s Bob Shryock. Shryock started on the outside of the front row and led for 39 laps, apparently headed for the win, but along came Council Bluff, Iowa’s Bill Martin.


Martin started on the inside of the fifth row and gradually worked his way through the field where he could challenge the leaders. Coming out of turn four on the 40th and last lap he edged ahead of Shryock and picked up the win by the slimmest of margins. It was Martin’s first Fairmont appearance in four years. Shryock would settle for second, Willy Kraft was third, Dan Nesteby took fourth and Dick Schiltz finished fifth.
In September of 1978, more than 80 Late Models returned to Fairmont for the second All Star race. Eight races were contested on September 21, with heat race wins going to: Bob Hill, Jerry Holtkamp, Bob Shryock, Arnie Braland, Les Staedel, Bob Saterdalen, Ted Zieman and Jack Harder.
The following night, September 22, a trophy dash, two consolation races and two semi-mains would take place and then it was time for the 40-lap finale. What ensued was a three-car battle. Bob Hill would start on the pole and lead the first 25 laps. On lap six, the red flag waved as Shryock tried to pass Holtkamp on the high side for second. Shryock slid off the track between turns one and two. He would tag on the back of the pack and have to make his way back to the front.
Meanwhile, Hill, Holtkamp and Dave Bjorge continued to wage war up front with Holtkamp making the pass on Hill for the lead on lap 26. Holtkamp would hold on for the win with Bjorge passing Hill for second. The three were never more than a car length or two apart during the entire 40 laps. Gary Crawford finished fourth with Shryock racing his way back to fifth.
1979 would see another huge field of Late Models descend upon Fairmont for the 3rd Annual All Star Race. The event, once again required eight heat races to be ran on opening night with wins going to Bill Martin, Arnie Braland, Jerry Wancewicz, Jim Bruggeman, Em Fretheim, Steve Egersdorf, Denny Selting and Al Druesdow. The first night feature (first and second place finishers in the heat races) went to Bill Martin followed by Gary Crawford, Jim Bruggeman, Steve Egersdorf and Clayton Petersen, Jr. 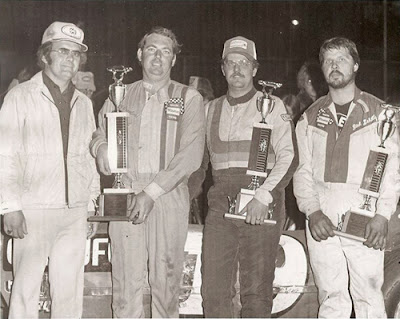 Promoter Jim Edgington (left) joins 1979 winner Gary Crawford, runner-up Clayton Petersen Jr. and third place finisher Dick Schiltz. - Tom Lathen Photo
After position races and consolation races the second night, the field was set for the 40-lap All-Star 10,000. Jerry Wancewicz and Bill Martin started on the front row and exchanged the lead early on in the race. But the man on the move was Gary Crawford, who had started in the fifth row, but by lap 10 Crawford took the lead and ran unchallenged for the rest of race.


Clayton Petersen, Jr. moved up to take second with Dick Schiltz third, Wancewicz fourth and Martin fifth. The drive of the night was put on by Schiltz. He started in the fourth row of the second consolation race and won. Then he started in the back of his semi and got all the way up to second behind Bob Hill to grab the 24th starting position in the A-main. Schiltz  would proceed to drive through the field again to grab the third spot at the end.
If Dick Schiltz left a lasting impression on race fans at the All-Star race in 1979, he would leave a bigger impression on them the following year. After winning his heat and the feature on Thursday night, Schiltz returned for the final night’s action (which ran on Sunday after Saturday night’s program was washed out) and continued to dominate. 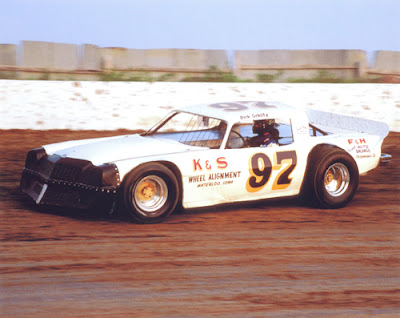 Dick Schiltz won the 1980 All-Star event at Fairmont. - John Vass Photo
First, he won the Sun Dash and a check for $500. Then in the feature event, he quickly grabbed the lead and sailed into the sunset as they say. Schiltz built up as much as a half-lap lead at times and came home an easy winner, pocketing $2,200 for the win. Early contenders Bob Hill and Bob Shryock fell out with engine problems. Other starters had a hard time dealing with the dry track surface. Following Schiltz to the win were Jerry Holtkamp, Bill Martin, Denny Hovinga and Em Fretheim.
In 1981, it was the All-Star 15,000 and there would be a repeat winner, but it would not be without a bit of controversy. Dave Bjorge would lead time trials with a clocking of 19.56 second with Jerry Holtkamp at 19.83. The remaining 40 drivers would all trip the timer at over 20 seconds.
Bjorge and Holtkamp had the two fastest times and started on the front row for the feature.  Holtkamp grabbed the lead with Bjorge close behind. At the mid-point of the race Gary Pedersen’s hood came off with the assistant flagman throwing the yellow and the flagman leaving the green displayed. This caused Holtkamp to slow down just enough to let Bjorge by. Other positions were scrambled as well.
The race ran several laps more laps and then a car spun out. At this time, the lead was handed back to Holtkamp with the laps ran counting and the other position changes left alone. Holtkamp held off Bjorge the remainder of the race and picked up $2,500 for the win. After the race, Promoter Jim Edgington met with Holtkamp and Bjorge and then confirmed Holtkamp as the winner. Following Holtkamp and Bjorge to the line were Craig Jacobs, Denny Osborn and Lynn Idler.
In earlier action, Bjorge, Holtkamp, Dwaine Hanson and Bob Hill won heats with Bob Shryock picking up the Sundrop Dash, Bob Hesch the consolation event and Willy Kraft the semi.
If Dave Bjorge left Fairmont disappointed in 1981, he did not in 1982. Already a winner in other specials held at the Fairmont Speedway in 1982, Bjorge won his heat, the position race for the pole and the 40-lap feature as well as a check for $3,000. 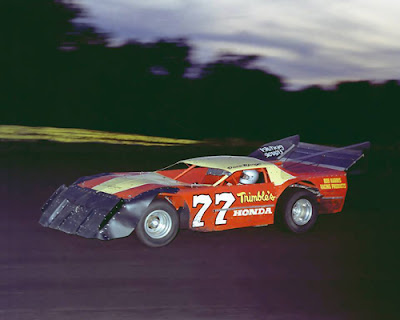 Minnesota native Dave Bjorge won the final All-Star race in 1982. - Lee Johnson Photo
Nearly 70 Late Models were on hand for the sixth edition of the All-Star race with heat race wins going to Bill Christman, Craig Jacobs, Phil Gadbois, Bjorge, Bob Hill and Roger Tapper. Dave Knott won the C feature and Dick Schilitz the B main.
As for the feature, Bjorge grabbed the lead at the outset and was never headed. Bob Shryock winner of the second place position race would be his closest competition and he would finish second. Mike Smith, Tapper and Em Freitheim rounded out the top five.
The 1982 All-Star race would be the last but during the six-year run of the event, it provided Southern Minnesota and Northern Iowa race fans with some outstanding racing.