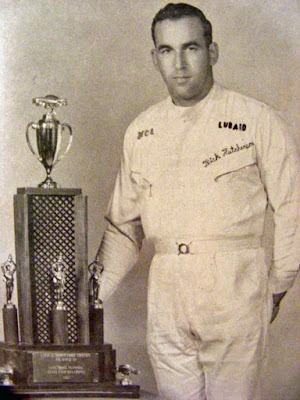 (December 6, 1964) Dick Hutcherson of combined his own charging style with the amazing stamina of a 1964 Ford to win 29 feature events and National Championship honors on the International Motor Contest Association late model stock car circuit.


Hutcherson, who successfully defended his 1963 title position, earned in prize money alone a total of $21,360 plus a $2,415 share of the IMCA point and current late model fund bringing Dick’s overall winnings during 1964 to a healthy $24,175.


He also tallied 3,760 championship points on the circuit - 918 better than second place finisher Ramo Stott, also of . Perennial front-runner and five-time national champion Ernie Derr ended the season in third place. He and Stott both drove new “hemi-head” Plymouths during 1964.


A reasoned veteran at 33 years of age, “Hutch” has been competing with IMCA since 1959 He was no novice to the speed sport when he joined the association. In fact, he put in several top years of modified competition in and was Keokuk champ in 1956 and 1958. He has never finished lower than third in the IMCA point standings during those six years.


Hutcherson at present is working at the Holman and Moody plant in . N. C, preparing a 1965 Ford for combat on the upcoming IMCA schedule which will get under way at , in April.