Bill Wrich; One of a Kind 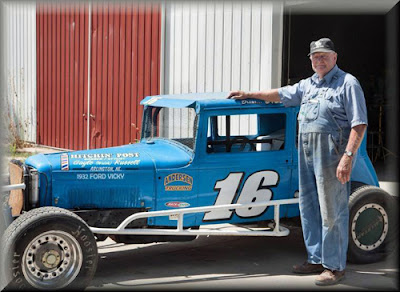 Bill Wrich of Kennard, Neb., poses next to his GOTRA car - Photo courtesy of Lee Ackerman

by Lee Ackerman
Omaha, Neb. - In 1954, they built a 1/5th-mile track in Arlington, Nebraska near the Washington County Fairgrounds. As the track was nearing completion, a 16-year-old farm boy was helping his dad on the farm and asked his dad if it was all right if he raced at the new track. His dad said, “I really don’t care because, I don’t think you will like it.


The farm boy raced at the new track on June 20, 1954, winning his heat race and the trophy dash before retiring from the feature with mechanical issues. In 1995, that same farm boy was still racing winning the Grand National Late Model Championship at Sunset Speedway in Omaha. In between, Bill Wrich put a lot of miles on going to racetracks around the Midwest, and he won a lot of races.
Bill finished fourth in the points that first year at Arlington, and twice scored clean sweeps winning his heat, the trophy dash and the feature. In 1956, Bill and wife Joyce even planned their marriage so they wouldn’t miss a race at Arlington. They got married on a Tuesday, took a quick honeymoon to Colorado and were back in time for the races at Arlington on Sunday night. 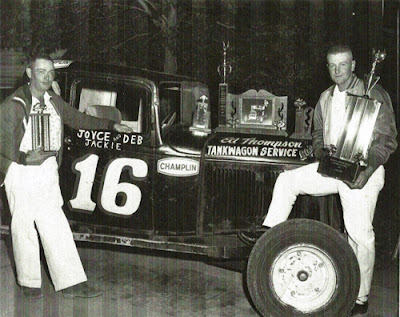 Bill Wrich in the early days of his racing career. - Photo courtesy of Lee Ackerman
In 1957, Bill won the track championship at Arlington. In 1958 while leading the point race by a large margin, he decided to switch tracks and run at Onawa, Iowa, he still finished second in points at Arlington without running the last several races.
In 1961, he dominated racing in the Omaha area winning the track championship at Playland Park in Council Bluffs, Iowa and sharing the track championship at Sunset Speedway in Omaha with Bud Burdick. On Labor Day Weekend 1962, Skylark Raceway in Columbus (then a hot-bed of coupe racing) held the “Five State Mid-States Championship.” Fifty-Three cars from five states competed in the race and Bill, without ever racing at the track before, come away with the victory.
In 1964 driving No. 8-Ball car, Bill decided to try out the competition at a new track in Sioux City called Soos Speedway, built over a ballpark. After winning several weeks in a row, he was encouraged by the locals to find somewhere else to race. He also continued to race occasionally at Sunset Speedway during this time.
In 1966, Al Hadan, owner of Sunset Speedway built a 1934 Willy’s to race. “It was an interesting car.” remembered Bill. “We found a Willy’s frame along the banks of the Platte River and dug it out. The first night out we won both features, after that the frame seemed to get weaker and it just never raced well.“ said Wrich.
In 1968, Bill teamed with legendary Harlan, Iowa mechanical whiz, Dale Swanson and the results were nothing short of spectacular. Driving the legendary No. 55 Swanson Chevy, they won almost every feature at Denison, Iowa that year and ran away with the track championship. They also won several races at Harlan and took the track championship there as well.
In 1969, driving the No. 180 car for Tom Gawley, Bill continued his winning ways and finished second at Harlan and was named the track’s top driver. The pair also won a number of events at the Iowa State Fairgrounds in Des Moines, including a last lap pass to claim the bounty put on local star Don Hoffman. In 1969, Bill also claimed his second track championship at Sunset Speedway.
1969 was also the year of Bill’s most memorable win, that coming at the Shelby County Speedway in Harlan, Iowa. Bill was cruising along when his left front wheel came off. Instead of dropping out of the race though, Bill just kept going. Bill backed off the gas and limped around the turns, then as he was coming off the turn, he’d hit the gas enough to keep the front wheel-less left front hub just a few inches off the ground until he got into the next corner. He did that for three laps and WON!
In 1970, Bill won the “Speedway Invitational” at Sunset in his back-up car. He raced at Harlan on Friday nights, Des Moines on Saturday night and Sunset on Sunday night. In 1971, due to the success he was having, he was in the running for a ride in a Junior Johnson car, but things didn’t work out and the ride went to a driver from South Carolina named Cale Yarborough, who went on to win three NASCAR Cup Championships in the ride.
The 70’s saw Bill spending time campaigning in the IMCA fair circuit and with USAC. Bill won IMCA Stock Car events at the Clay County Fair in Spencer, Iowa in 1973 and 1977 as well as a couple of other events at Spencer. He finished fourth in IMCA Stock Car points in 1976 and third in 1977.
On September 10, 1977, his win at Spencer was the last race every held in the old IMCA Stock Car circuit. Bill also tried racing for a time at the I-70 Speedway near Odessa, Missouri on the asphalt. Bill said, “the first time I went down there we won our heat and ran second in the feature. But that was before the interstate was finished and we had a devil of a time just getting there.” 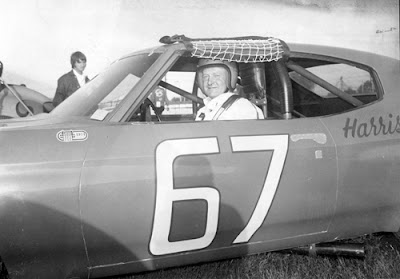 Bill Wrich poses in his stock car, 1974 - Kyle Ealy Collection
Bill also campaigned in 1974 and 1975 in several USAC events. He brought home two top-10’s including a fifth at the Terre Haute Action Track in Indiana. In looking back, Bill says, “I built my own cars, because I wanted to race Chevrolets. I should have gone down and bought one from Bobby Allison, I would have probably been better off.”
He also raced the red No. 54 for Larry Skalberg during this era, mostly in special events. He won the late model portion of the “Sunset Classic” called the Triple Crown event, in 1973 and again in 1977.
Being a farmer, Bill said there were times I was too busy or didn’t have the money to race. “When the cattle market was good, I was back racing again.” recalled Wrich. In 1995, Sunset Speedway added the Grand National Late Model class, and it’s first point champion was an old farmer from Kennard named Bill Wrich. Bill raced the series through 1998 before retiring from the series.
His last race was at the 2000 “Tiny Lund Memorial” in Harlan, which was won by his son Dwight in a car prepared by Bill. One thing about Bill Wrich prepared cars, they usually were very well balanced. Tragically, two weeks after winning the “Tiny Lund”, Bill’s son Dwight lost his life in a fiery crash at Denison.
Bill raced one more time, at the legends race at I-80 Speedway in 2005. He started in the sixth row and took the lead on the last lap to win the race.
Bill was born on July 30, 1956 on a family farm south of Kennard where he still lives with is wife, Joyce. Their children include; Debbie Kerber of Blair, Jacque Salerno of Omaha, Gayle Russell of Arlington and their late son Dwight. The Wrich’s also raised nephews Randy Larsen, who lives in Arizona and Ricky Larsen of Omaha.
While his racing career is over, and having recently had heart surgery, I wouldn’t look for him to give up farming to soon. On the other hand, I do know that that old 1958 Ford hauler that Bill used to haul race cars to the tracks with since the late 60’s, is still setting in a shed on the family farm, so who knows.
Writer's note; The above was a story I wrote about Bill Wrich for Hawkeye Racing News maybe eight or nine years ago. We just lost Bill and he will be greatly missed by family, friends and the entire racing community. Bill was one of a kind, no doubt about that.
To update this story, Bill stayed on the farm and eventually that old Ford Hauler came out of the shed and carried a beautiful powder blue no. 16 GOTRA car to races across the area as he raced with the Good Ole Time Racing Association. This past summer (64 years after his dad told him he didn’t think he’d like racing) he was still behind the wheel. You know the saying, once a racer always a racer, and Bill Wrich fit that description to the letter.
I can't speak for anyone else, but next year when GOTRA rolls into a town that I happen to be at, I'm going to miss seeing that old hauler, and the gruff old guy with a jolly laugh that just made you feel better about life
Bill Wrich was truly one of a kind.